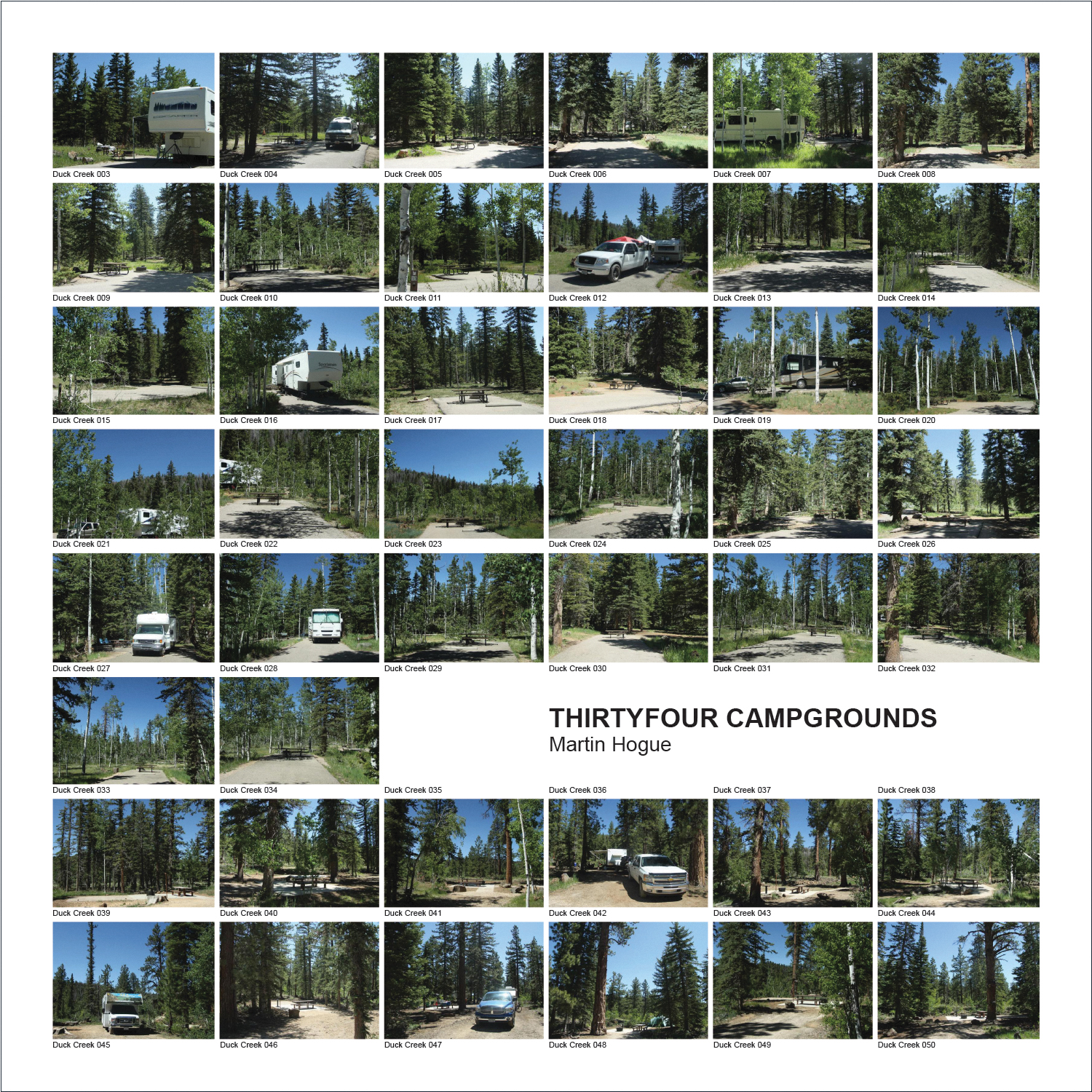 Camping can make us feel a powerful connection to nature and our rugged backwoods forebears. Campers once confronted the elemental facts of life, but now, the millions of Americans taking to the road on camping trips are more likely to drive to a campground, hook up service conduits, connect to WiFi, drop their awnings, and set out patio chairs. It is as if, Martin Hogue observes, each campsite functions as a stage upon which campers perform a series of ritualized activities (pitching the tent, building a fire, cooking over flames). In Thirtyfour Campgrounds—operating in the tradition of Ed Ruscha and the Bechers—Hogue investigates these sites offering a photographic and typological survey of nearly 6,500 American campsites, mapping subtle differences within the apparently identical. In honor of National Park Week, Martin Hogue discusses his quirky and innovative book.

Thirtyfour Campgrounds is a book about camping, campgrounds and campsites, but I myself am not much of a camper nor do I profess a great love for the outdoors. The book I wrote is not strictly intended for scholars and practitioners of the craft, but also meant for a broader audience of art and design professionals.

The first time I checked into a campground—with a borrowed tent and sleeping bag— 15 years ago, I became immediately intrigued by the map handed to me by the attendant: printed on an 8.5×11” sheet of paper, this document described key public amenities (main office, pool, miniature golf course, pet walking area, laundry, food truck, etc.) and the precise location of each individual campsite within the facility. As a prospective camper, I had imagined a far more informal experience (i.e. walk a 1/4 mile from the road, find a quiet spot without too many people around, set up your tent there). As an architect interested in issues of spatial organization, I was instantly fascinated by the prescriptive nature of this map and its system of pre-determined sites. The act of claiming and maintaining a site, which only 150 years ago would have necessitated many days of hard work, now seemed reduced to a choice between competing amenities: Near the bathroom or the water tap? Near the RV loop? How far away are my neighbors?

The 1966 Bruce Davidson photograph of a Yosemite National Park campsite that appears at the beginning of the book is the best image I can think of to highlight this profound disconnect between the great American ideal of being outdoors that many of us share when entering nature, and the physical realities of the campground as a unique spatial setting. It’s interesting that this very same campsite (Upper Pines 04) also appears on page 249 of the book; 50 years separate these 2 photographs, and I like to imagine the thousands of campers who have occupied this site in the interim. 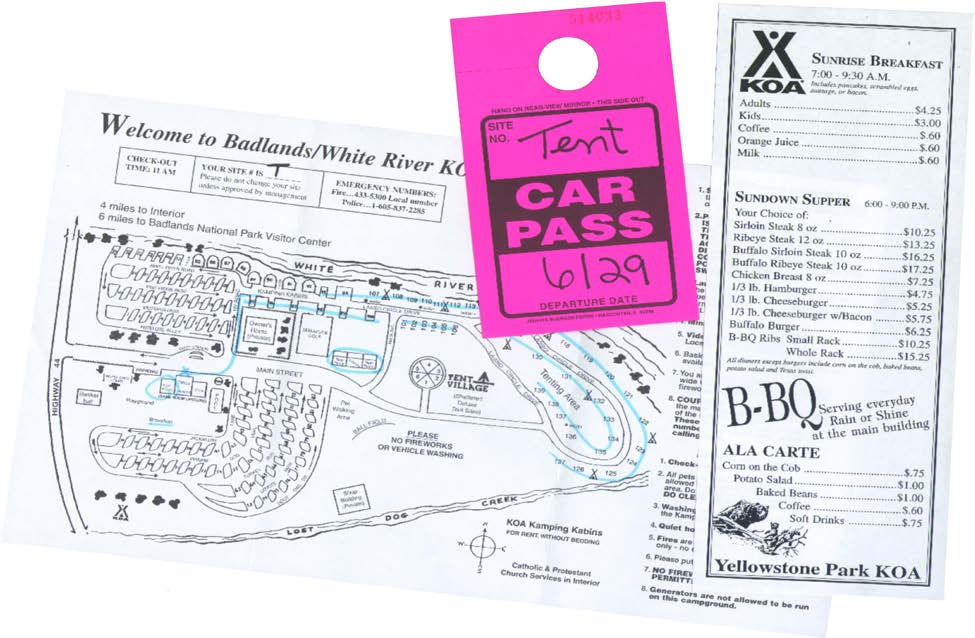 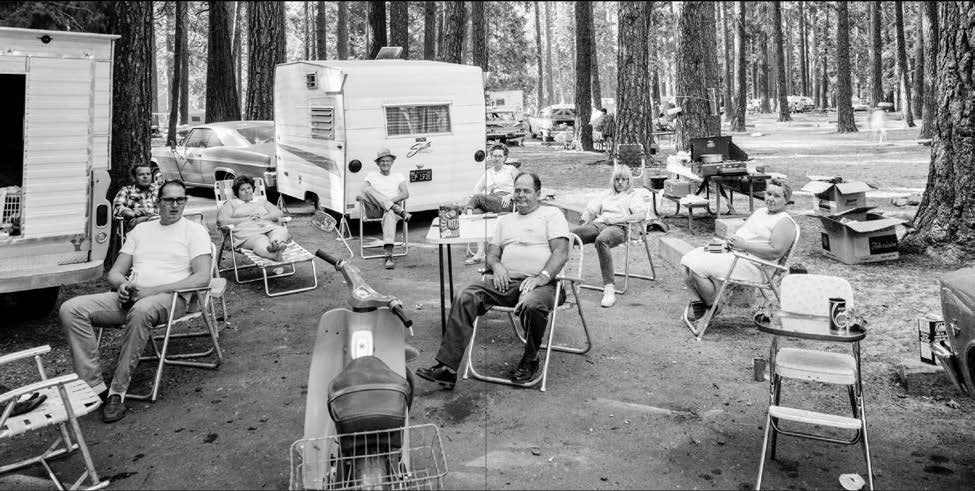 How have you been influenced by artists like Ed Ruscha and Bernd and Hilla Becher?

As a work of landscape and photography, Thirtyfour Campgrounds offers a nod to important artists who have expressed an interest for documenting similar generic settings in the landscape. I mentioned the key influence of Bruce Davidson’s Campsite no. 4 (1966) earlier, but there are other references as well: the title and tone of the book are in direct reference to Ed Ruscha’s classic 1967 Thirtyfour Parking Lots (down to the idiosyncratic spelling of its title), which features aerial views of empty parking lots of all shapes and sizes in the Los Angeles area. The neutral, systematic arrangement of the thousands of campsite images collected in the book into grid form owes to German photographers Bernd and Hilla Becher’s typological studies of blast furnaces, cooling towers, grain elevators and other industrial structures, and whose work are staples of contemporary art collections.

What initially drew me to working with The MIT Press on this book is the extensive number of titles dedicated to Ruscha and the Bechers in their catalog: these include Various Small Books—Referencing Various Small Books by Ed Ruscha (2013) as well as Ed Ruscha’s Los Angeles (2010). Even more impressive are the 9 titles devoted to Bernd and Hilla Becher’s works, including Water Towers (1988), Gas Tanks (1993), Industrial Facades (1995), Framework Houses (2001), Industrial Landscapes (2002), Typologies of Industrial Buildings (2004), Cooling Towers (2005), and Grain Elevators (2006). Published in 2006, Susanne Lange’s Bernd and Hilla Becher: Life and Work is a wonderful and comprehensive introduction to the photographers’ work. Given my own deep appreciation for these groundbreaking artists and their work, I felt there would be support and interest from MIT Press in the project, and it’s been a distinct pleasure and an honor working with the staff on this book.

A comparison between one of Ed Ruscha’s Thirtyfour Parking Lots and a sample page of campsites.

The neutral, systematic arrangement of the thousands of campsite images in the book into grid form owes to German photographers Bernd and Hilla Becher’s typological studies of blast furnaces, cooling towers, grain elevators and other industrial structures (second page from left).

How does Thirtyfour Campgrounds fit into your larger research interests?

My work on camping over the past several years has been a means to a broader end: as an architect whose work has been deeply influenced by conceptual artists like Robert Smithson and Gordon Matta-Clark, my research explores the notion of sites (including campsites) as cultural constructions — specifically, the mechanisms by which locations become invested with the unique potential to acquire the designation of “site”.  In [Fake] Fake Estates, for example, I proposed a new take on Matta-Clark’s seminal 1975 Fake Estates project, in which the artist purchased and later documented 14 residual land parcels at auction in Queens for $25 each (a 2.33’ x 355’ long strip of land, a 1.83’ x 1.11’ lot, among others). What has long fascinated me about the Fake Estates was the unbuildabuility of these parcels—that is, their inability to receive a building in the traditional sense. Like the abstraction of the campsite as unit within a larger system, Matta-Clark is suggesting rhetorically that a site could be something else than a piece of land to receive a building. The parcels I myself uncovered in Queens for [Fake] Fake Estates—for example, a lot 1/8” x 110’ in size—would make Matta-Clark’s original properties look palatial by comparison!

Camping research has taken up a lot of my time over the past 8 years. There have been other projects leading up to and resulting from Thirtyfour Campgrounds, including an exhibition of camping research titled 925,000 Campsites that was displayed at several different academic institutions over the past few years including Cornell University, the University of Southern California, and the Parsons School of Design. The title of the exhibit references an inventory of the total number of campsites in the United States that I conducted during the course of my research. This summer I will be an artist in residence at Stone Quarry Hill Art Park in Central New York, where I am proposing a project called Camping at the Art Park. For 4 consecutive weekends in June, the park will be opening its doors for campers to occupy 4 specifically selected sites on its beautiful, 104 acre property near Cazenovia, NY. As in the book, where visitors can reserve campsites by visiting websites like recreation.gov and reserveamerica.com, anyone interested in camping there can make a reservation online. Given my own interest in Conceptual and Land Art, I was fascinated by the deeply immersive experiences of Walter de Maria’s Lightning Field or James Turrell’s Roden Crater (once it opens to the public), where visitors are required to stay at the sites overnight. Similarly, Camping at the Art Park will provide visitors with the unique opportunity to experience the wonders of the site for an extended period of time, day or night. I do also like the idea that these campers will become part of the art inside the park, which is to say that they too are on display for other visitors to see. 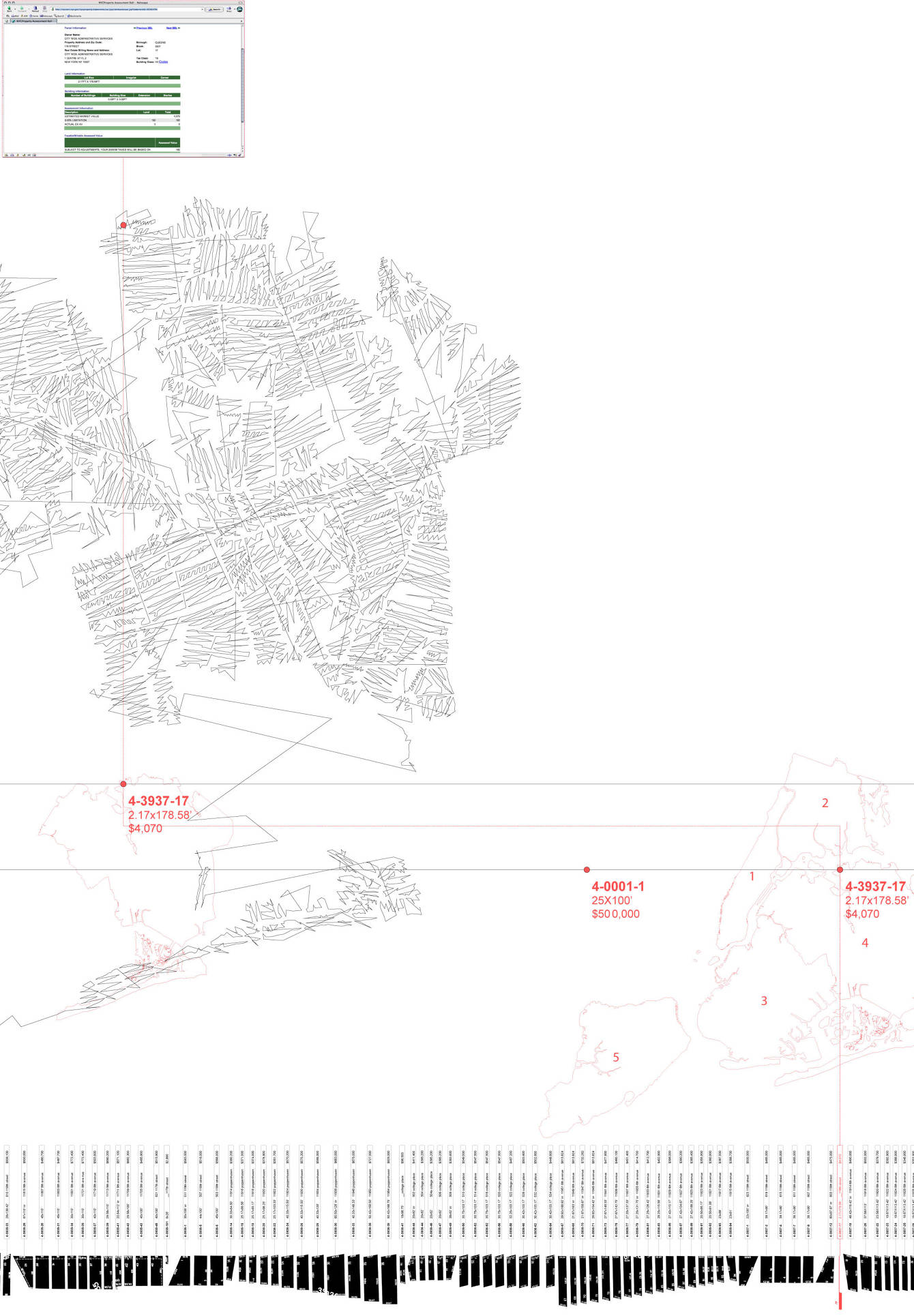 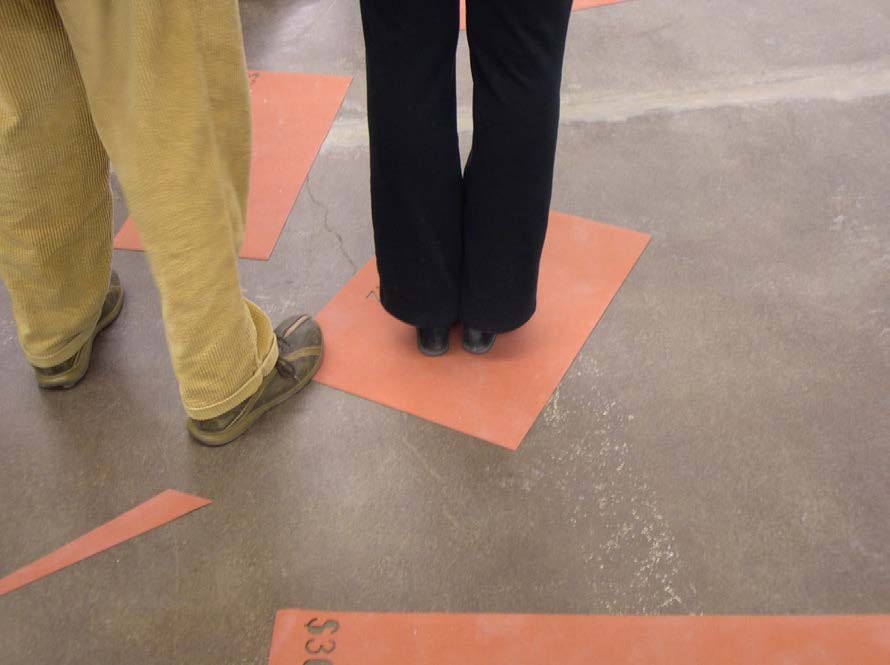 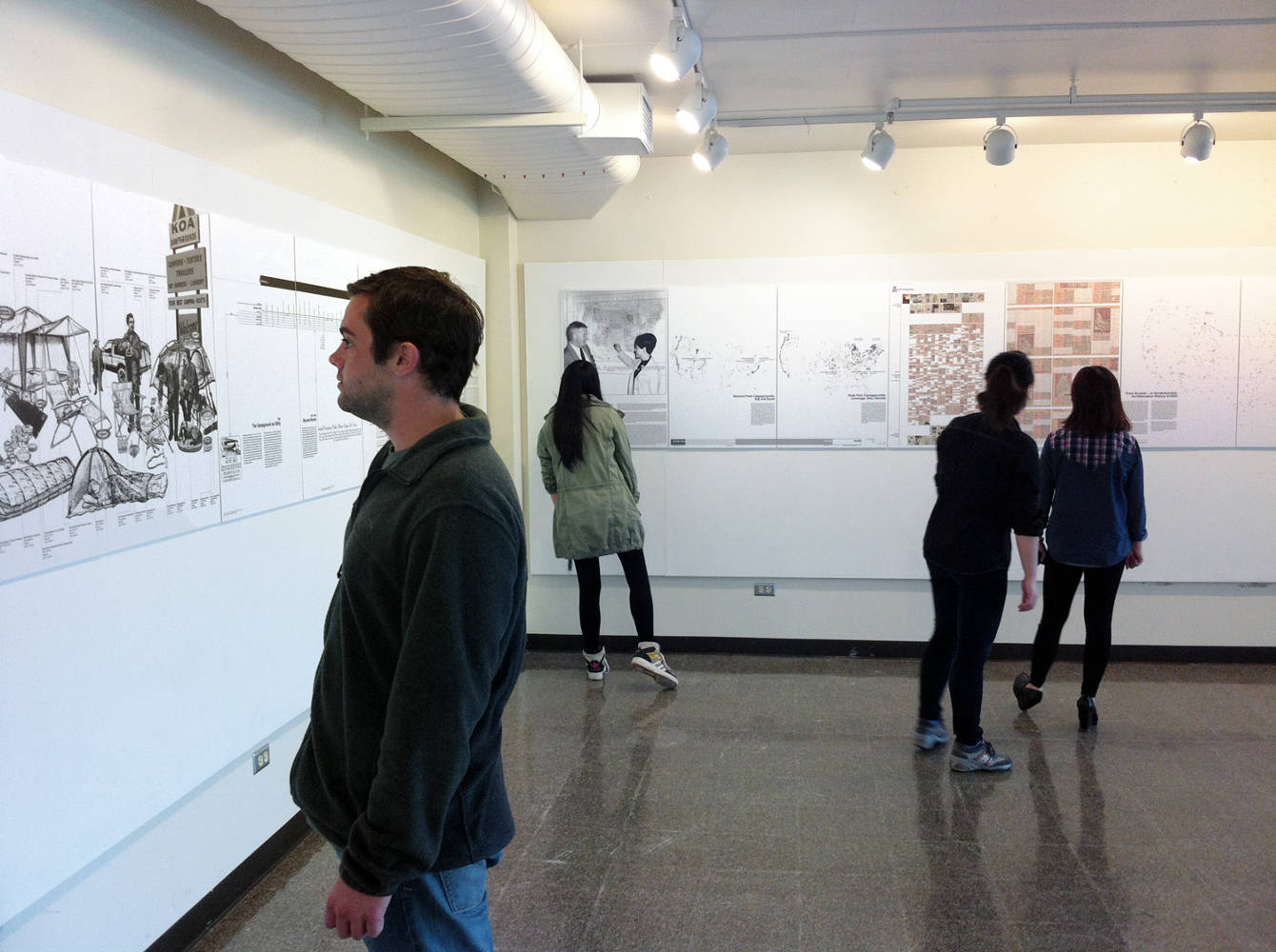 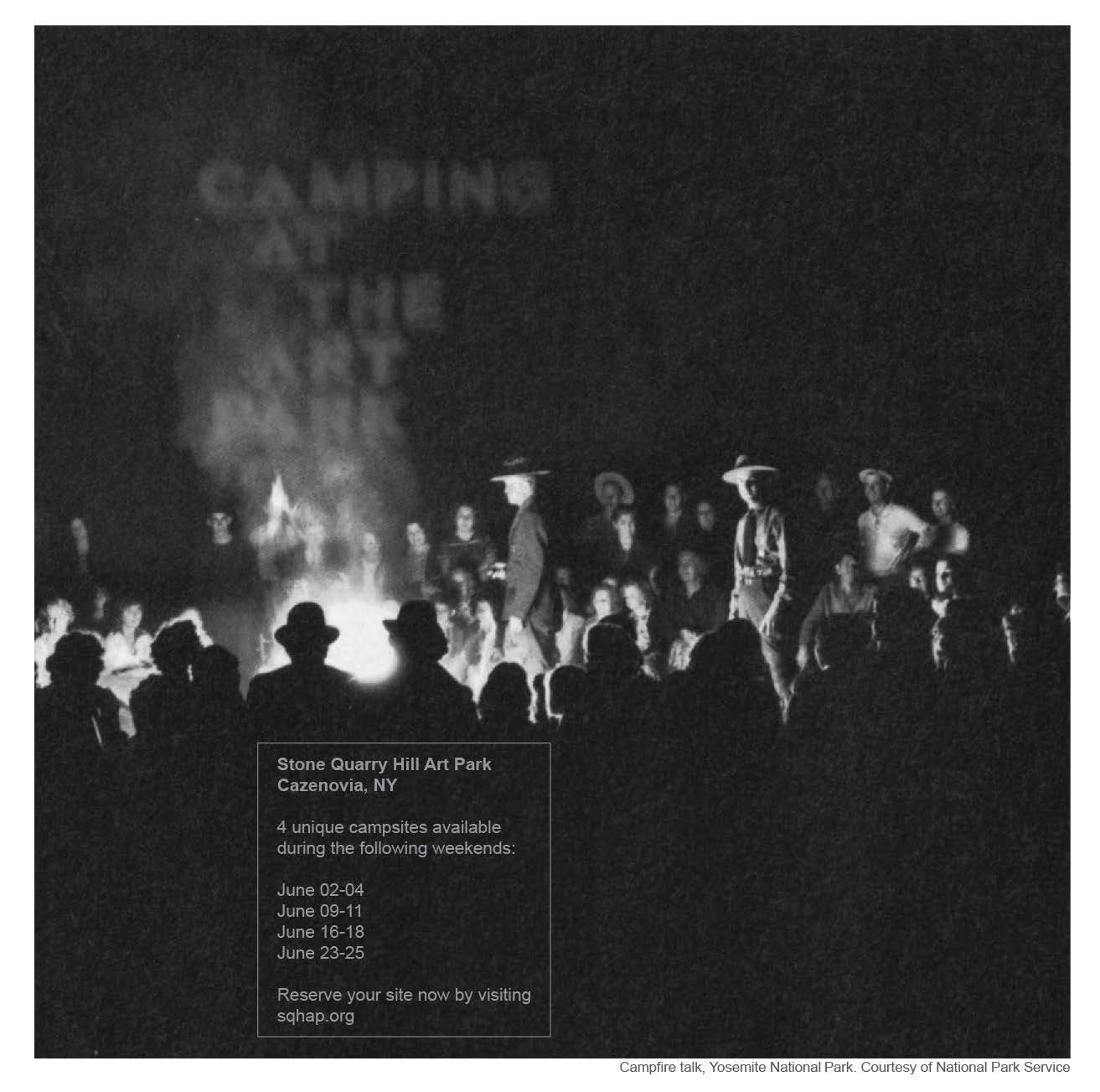 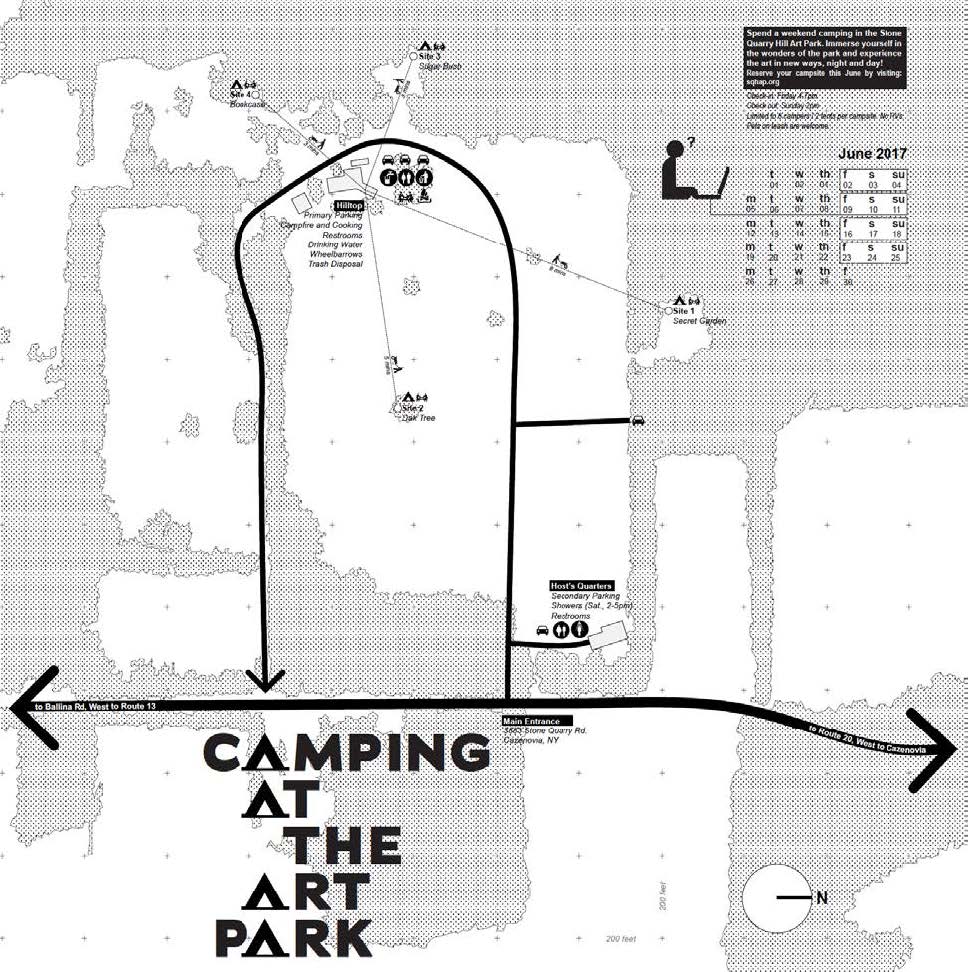 What does your book elucidate about the American landscape?

Modern campgrounds are replete with delightful irony. Each “lone” campsite functions as a stage upon which cultural fantasies can be performed in full view of an audience of fellow campers interested in much the same “wilderness” experience. As I found out when I checked into my first campground 15 years ago, that parcel of land upon which most campers elect to park their car, trailer, camper, or RV is not an imagined ideal: the 6,500 individual campsites that I retrieved from popular online reservation services like reserveamerica.com and recreation.gov and that are included in this book lay bare the myth of the camping experience in the United States, with its nearly one million individual campsites dispersed over 20,000 campgrounds. Thirtyfour Campgrounds examines the standardization and modernization of the contemporary campground as a unique setting in the American landscape where intersecting narratives and desires (wilderness, individuality, access, speed, comfort, nostalgia, profit) find themselves strangely and powerfully hybridized. 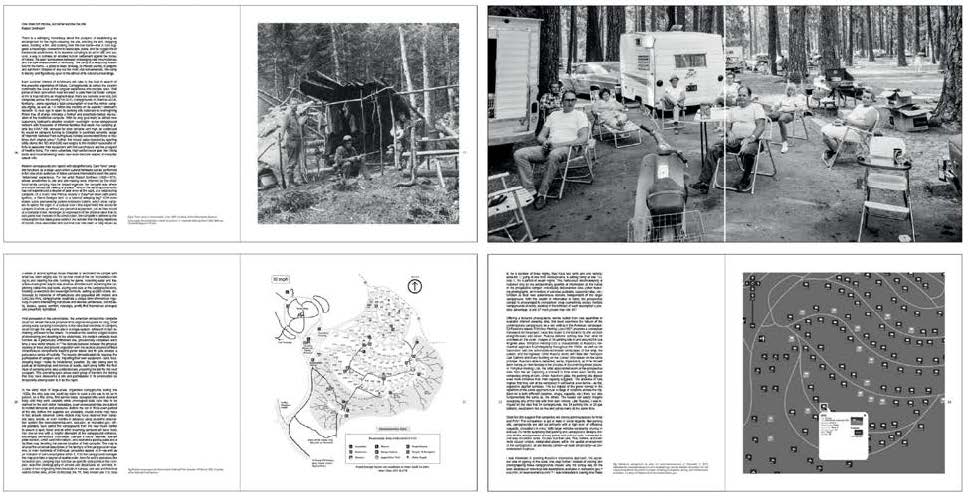 Thirtyfour Campgrounds sets out to link those 19th century hikers setting up camp from scratch in the wilds of the Adirondacks to those remotely reserving campsites online, months in advance of arrival.

Thirtyfour Campgrounds artfully plays with the separation between part and whole. It contains 6,500 images, but what is the larger picture that comes across?

Underlying the rigorous arrangement of campsite photographs into gridded form lurks a dry sense of humor: like Ed Ruscha’s Thirtyfour Parking Lots, this is a book that was made so seriously that it perhaps shouldn’t be taken too seriously either. In many regards it’s fascinating that campers shopping online on websites like recreation.gov and reserveamerica.com would be able to make enlightened decisions about their prospective encampment based on this kind of documentation. There are at once too many photos, and yet not enough to convey true meaning. There is no sense in hiding that within the undifferentiated landscape of the American campground, it is difficult to produce images (let alone sites) that don’t end up looking the same.

The reader may first find that no single page or section of the book stands out: Thirtyfour Campgrounds can be entered from just about any page and read forward, or in reverse. A chartreuse-colored ribbon serves as a placeholder among the endless repetition of dull, impersonal photographs. Taken by anonymous staffers of varying skill, the role of each photograph is not to capture the broader context of the campground but to document the campsite as a piece of real estate—a generic setting of utilities: picnic tables, fire pits, parking spaces.

But the repetition soon makes way for subtle differences. Textures of soil, shrubs, and foliage are revealed. Broad landscape features take shape in the background across consecutive photographs. Time reveals itself in fading light and passing clouds, the color of leaves, or the unexpected weather changes between photographs of neighboring sites. The book rewards patient and repeated viewings: by looking in between the exposures, as it were, a new reality begins to take shape. This is where the power of the book really lies. 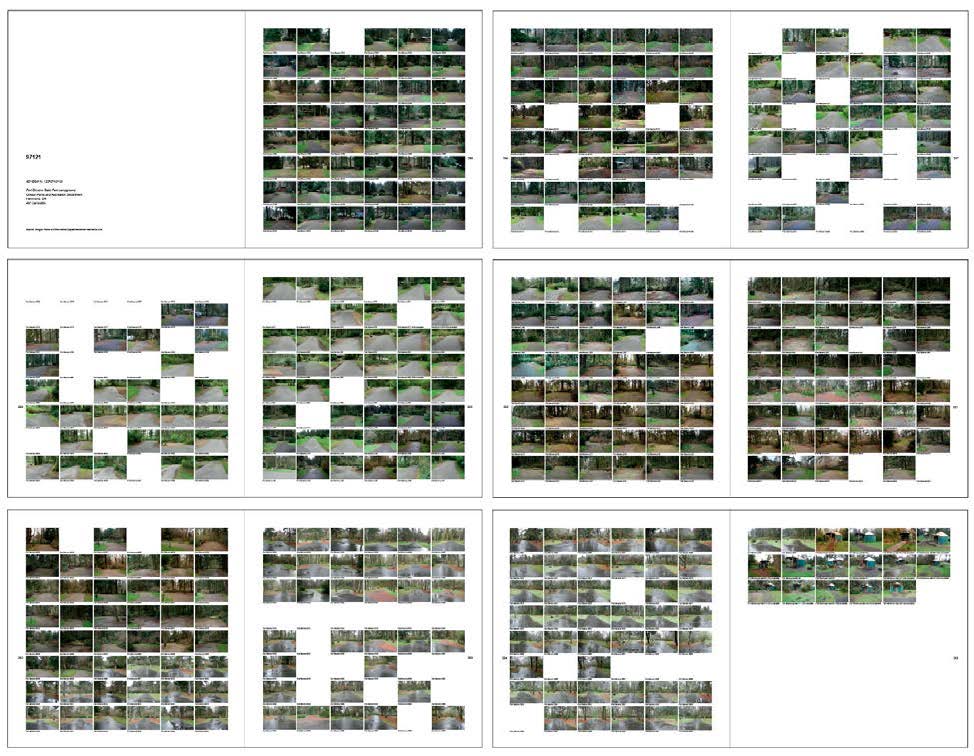 Spanning 11 pages and 497 individual campsites, Fort Stevens state park campground in Hammond, Oregon is the largest facility in the book.

The thousands of campsite photographs form the core of the book. What other aspects would you like the reader to come away with?

Given my training as an architect and landscape architect, I have been working primarily with analytical drawings as a mode of research and inquiry. I’m very happy with the set of original drawings included in the first part of the book. These illustrative diagrams, including those that establish a timeline explaining the evolution of the campsite over the past 150 years, form a strong complement to the written research, historical materials, as well as the photographic grids. 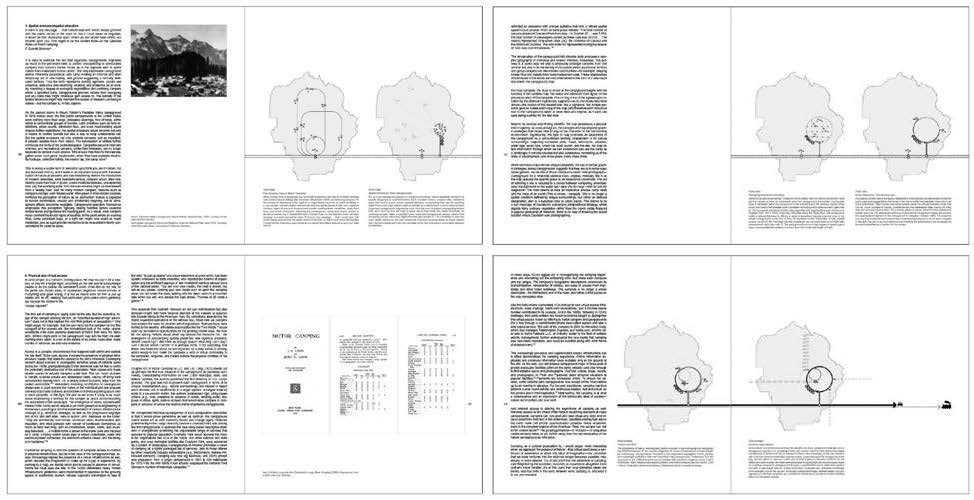 Original, author-produced illustrations combine with more traditional means of research in the early part of the book. Here, the diagrams trace the 150 year arc describing the development of the modern campground.