Welcome to Throwback Thursday on the University Press Week blog tour. Several presses are throwing back to pivotal moments in their history: Temple University Press reflects on the development of its influential Asian History and Culture series. Wesleyan University Press showcases poetry from the Wesleyan Poetry Series. Harvard University Press goes deep into its backlist and shares some unique finds. University of Washington Press examines its recently reissued Asian American classics, with an emphasis on cover design comparisons. University of Toronto looks back at publications of The Champlain Society, which publishes primary source archive materials exploring Canada’s history.

And in our own contribution to the blog tour’s #TBT theme, we offer the following retrospective from Acquisitions Editor Marc Lowenthal on former MIT Press designer Muriel Cooper featuring rarely-before-seen photographs. 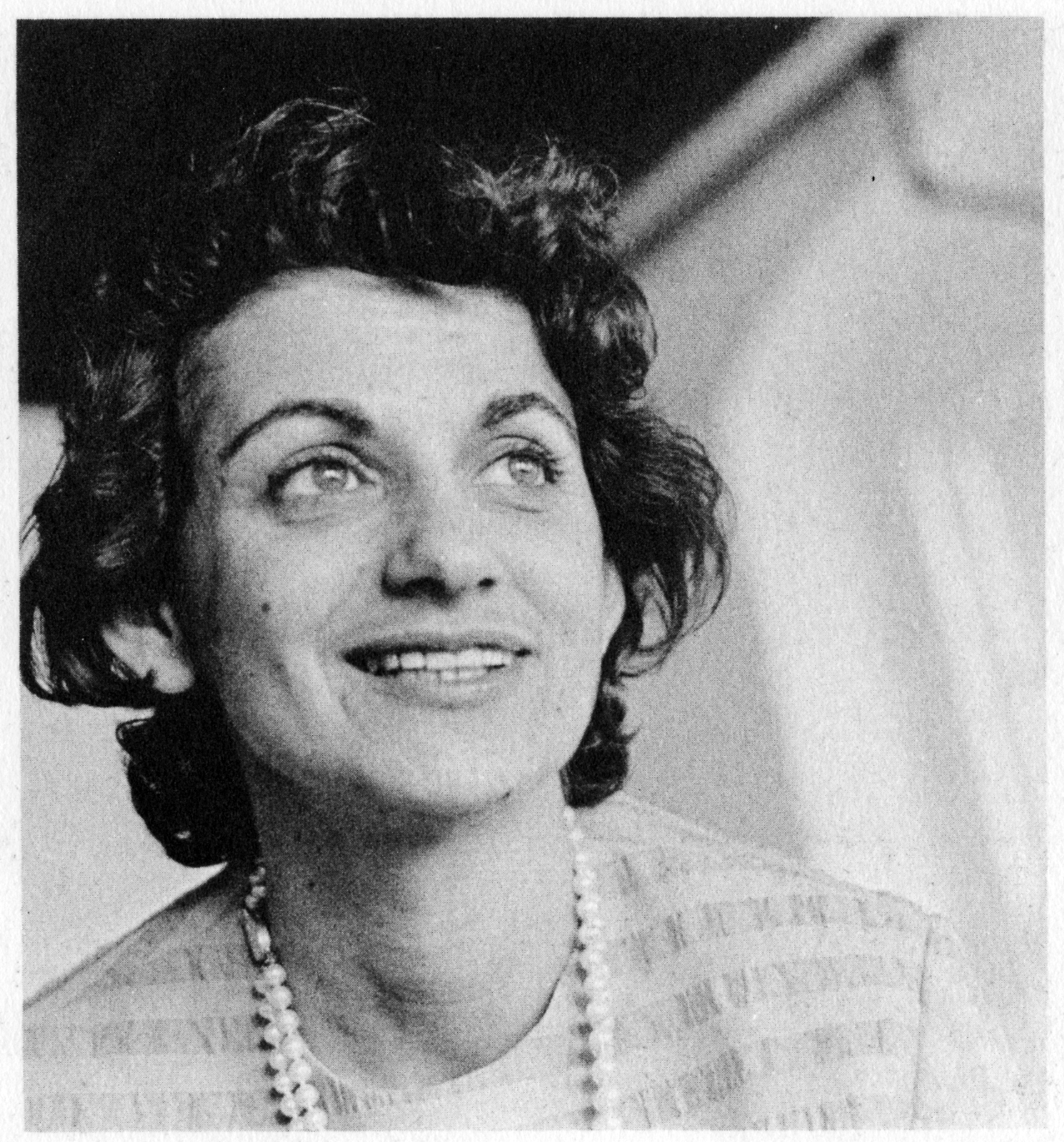 It’s no secret that some of the most innovative book design over the last few decades has taken place in the arena of the university press. A quick glance at any volume of the annual AAUP Book, Jacket, and Journal Show catalog will offer a range of reasons why print is not only far from dead, but continues to be an exquisitely versatile medium, and the university press a breeding ground for some truly experimental visual approaches to book design.

Cooper’s relationship to MIT itself preceded her involvement with the MIT Press proper. Born in Boston, Massachusetts in 1925, graduating from Massachusetts School of Art in 1948 (where she would later teach as an Associate Professor from 1962–1964), she worked as the art director and designer at MIT’s Office of Publications from 1952–1958. It was in that capacity that she executed a range of posters, brochures, and even the occasional LP jacket. 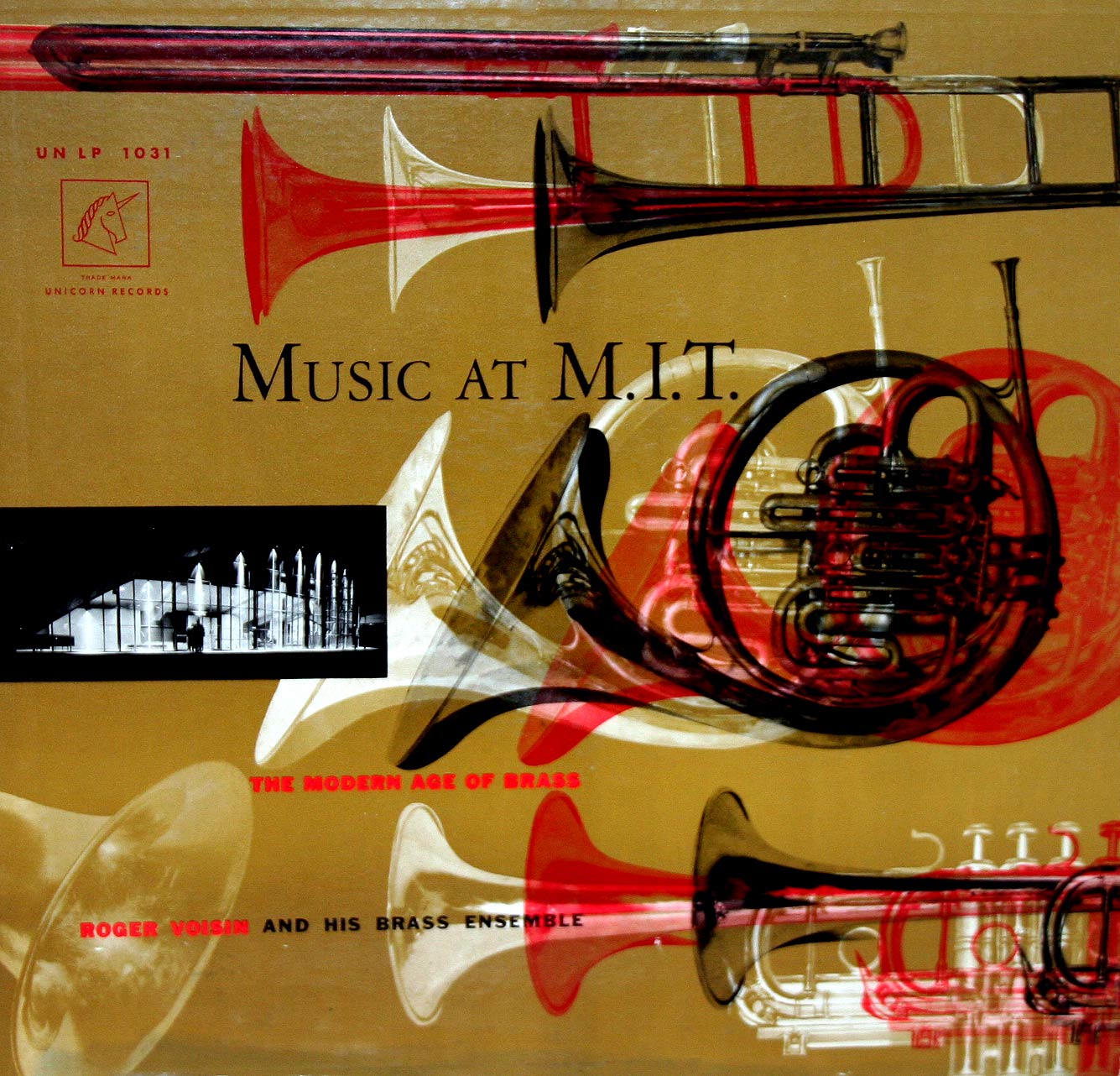 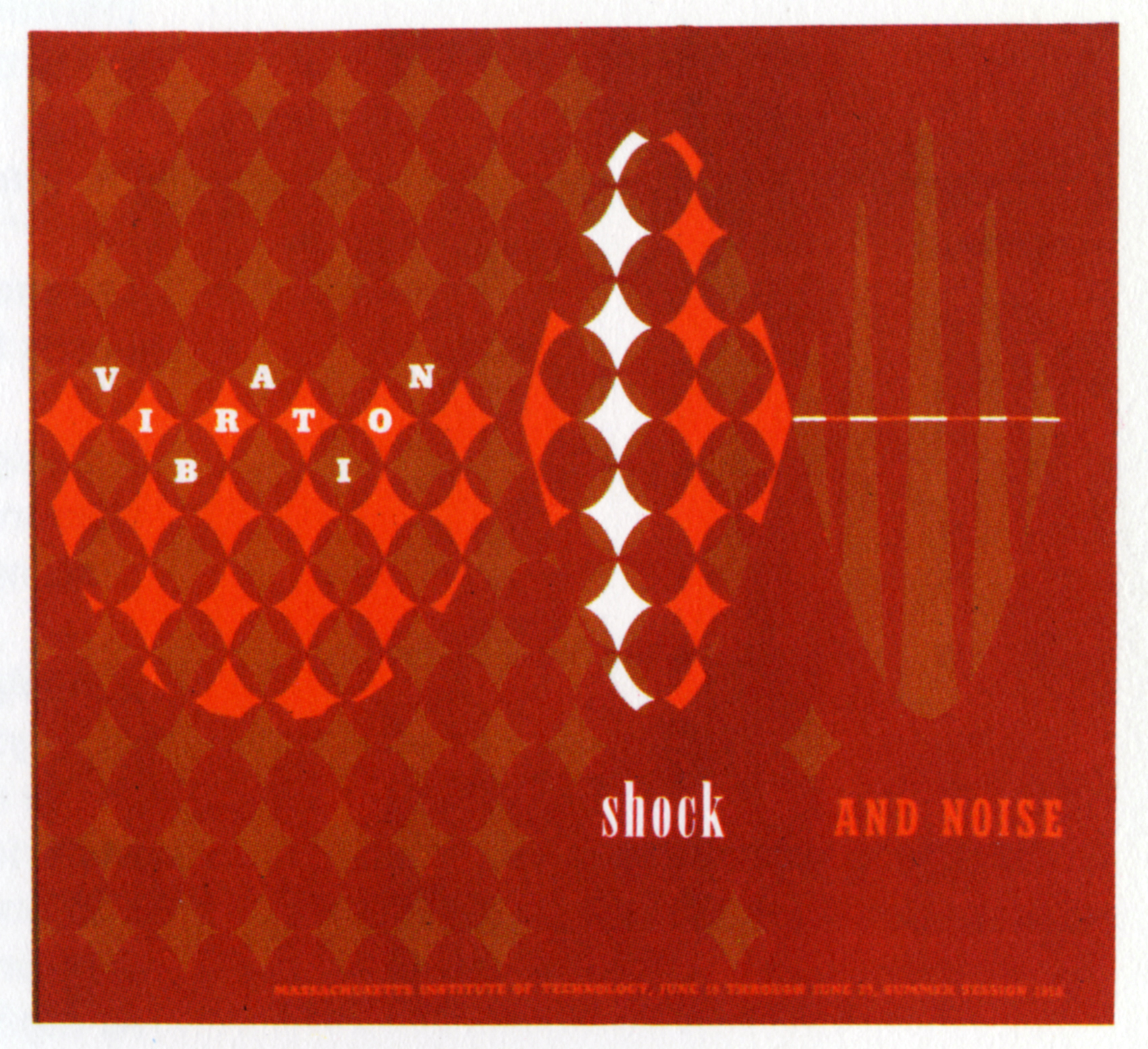 It was around then that she did some collaborative design with Hungarian-born György Kepes, who had taught at the New Bauhaus in Chicago before he came to MIT to start up a program in Visual Design in the School of Architecture and Planning (which would eventually become the Center for Advanced Visual Studies). After a Fulbright Scholarship in Design in Milan, Italy, Cooper then came back to her hometown of Brookline, Massachusetts, and started her own graphic design studio. While her design of the MIT Press colophon remains one of her most iconic works, she had already carried out a number of effective symbol designs for a range of entities before she came to the MIT Press.

Given her past relationship with MIT, it is odd that when the newly born MIT Press decided to visually rebrand itself, it approached her through a slightly roundabout manner. The MIT Press’s first director, Carrol (“Curly”) Bowen described how the Press came to hire Cooper in an annual report that he delivered in 1965:

One color filled autumn day in 1962 two representatives of the Press motored down to Connecticut and there, somewhat to the amusement of their host, vigorously argued that he, perhaps the best known American typographic designer, should render advice and council to the MIT Press in design and typography. In retrospect the presumption of the request was met extraordinarily politely and while negatively, yet constructively. Thus it came to be that Paul Rand bade us return to Boston, contact Muriel Cooper, place before her the commission we had tendered him, and if all went well, achieve the desired ends of distinctive and appropriate graphic design of our books, our promotional pieces, our letterhead, our visible selves.

And so Cooper did, with her design assistant Lauri Rosser. To undertake such an overall branding was unusual for the time, and certainly so for a university press, which still had some ivy-drenched stodginess to shake off in what was becoming a new era of university publishing. The fact that Cooper’s design work had broad ramifications within and without the Press is indicated by the fact that her official title there was “Media Director.” The success and innovative nature of the undertaking led to a request from Bookbuilders of Boston to address the organization in 1967. 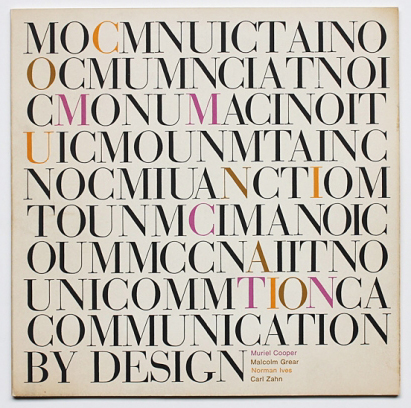 To be able to see the visual stages in the evolution of this iconic symbol is extraordinarily valuable. Happily, it is also possible thanks to the Muriel Cooper Archives at the Massachusetts College of Art, as well as the research and organization involved in the recent exhibition devoted to the work of Cooper at MIT at the Arthur Ross Architecture Gallery at Columbia University in early 2014 (“Messages and Means: Muriel Cooper at MIT”). Design sketches of some of her early concepts for the colophon can be seen in this photo from the exhibition (photograph by David Young): 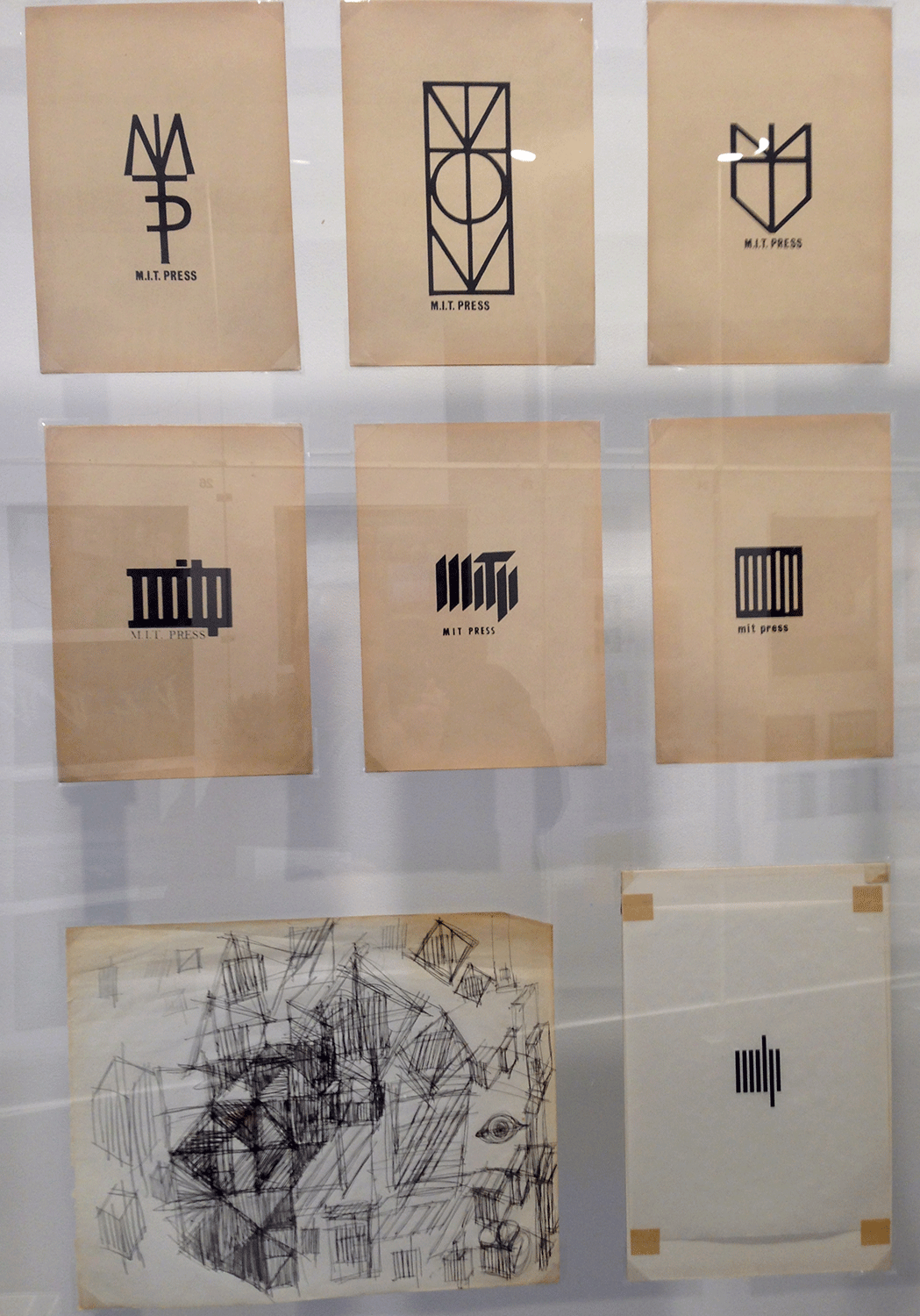 The visual thought process that went into the deceptive simplicity and far-from-effortless final product can be seen in a series of documents in the Massachusetts College of Art archives. 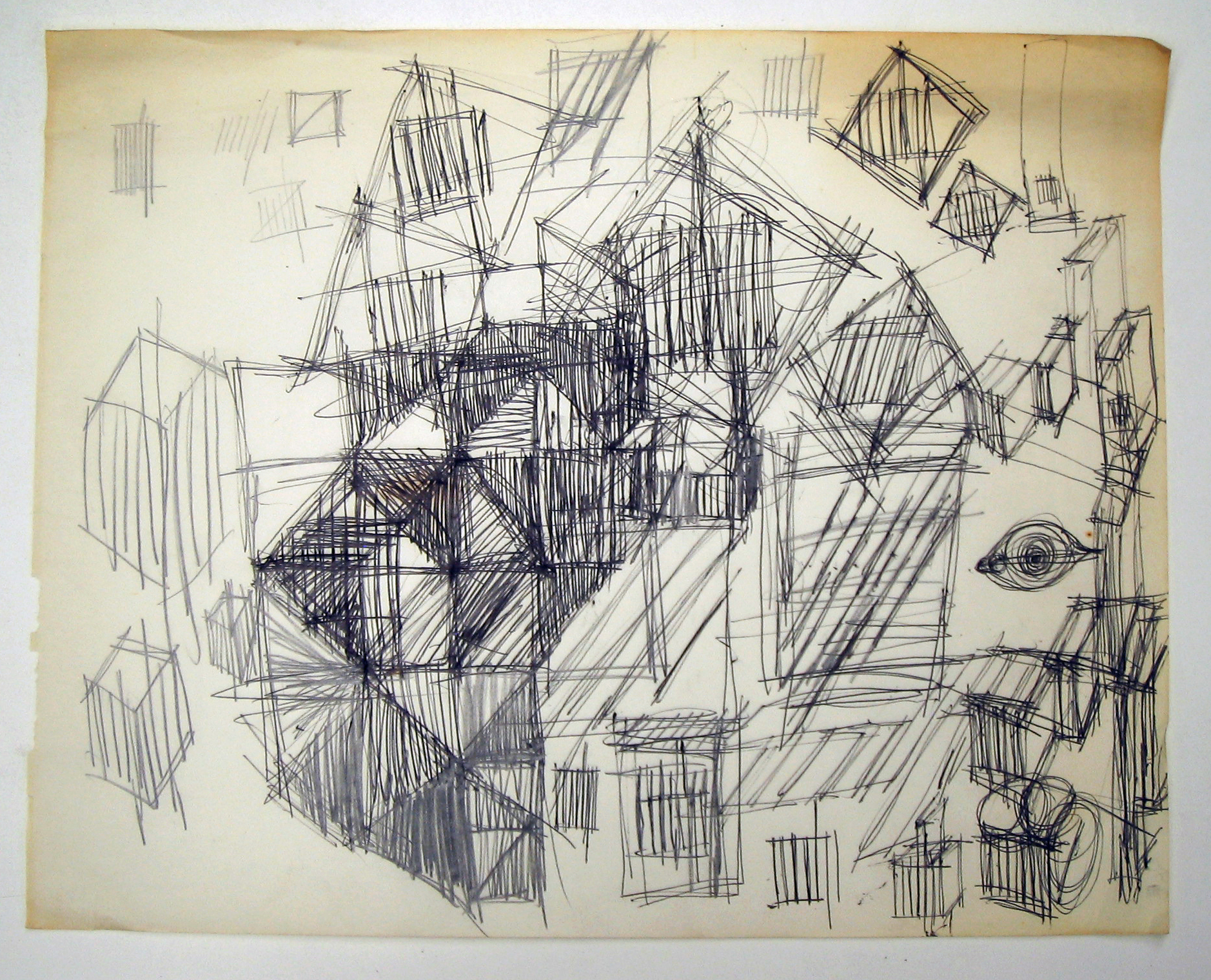 The original inspiration behind the bars of the colophon can be detected in some of the details within the large geometric spattering: at the bottom of the page, a three-dimensional block shows the earlier cube-like rendering of an open book from the earlier logos settle into a row of book spines upon an absent shelf, with one very tall volume indicating the sudden surge of lower-case “t”, and the volume next to it dropping itself below shelf level to strain toward a lower-case “p.” 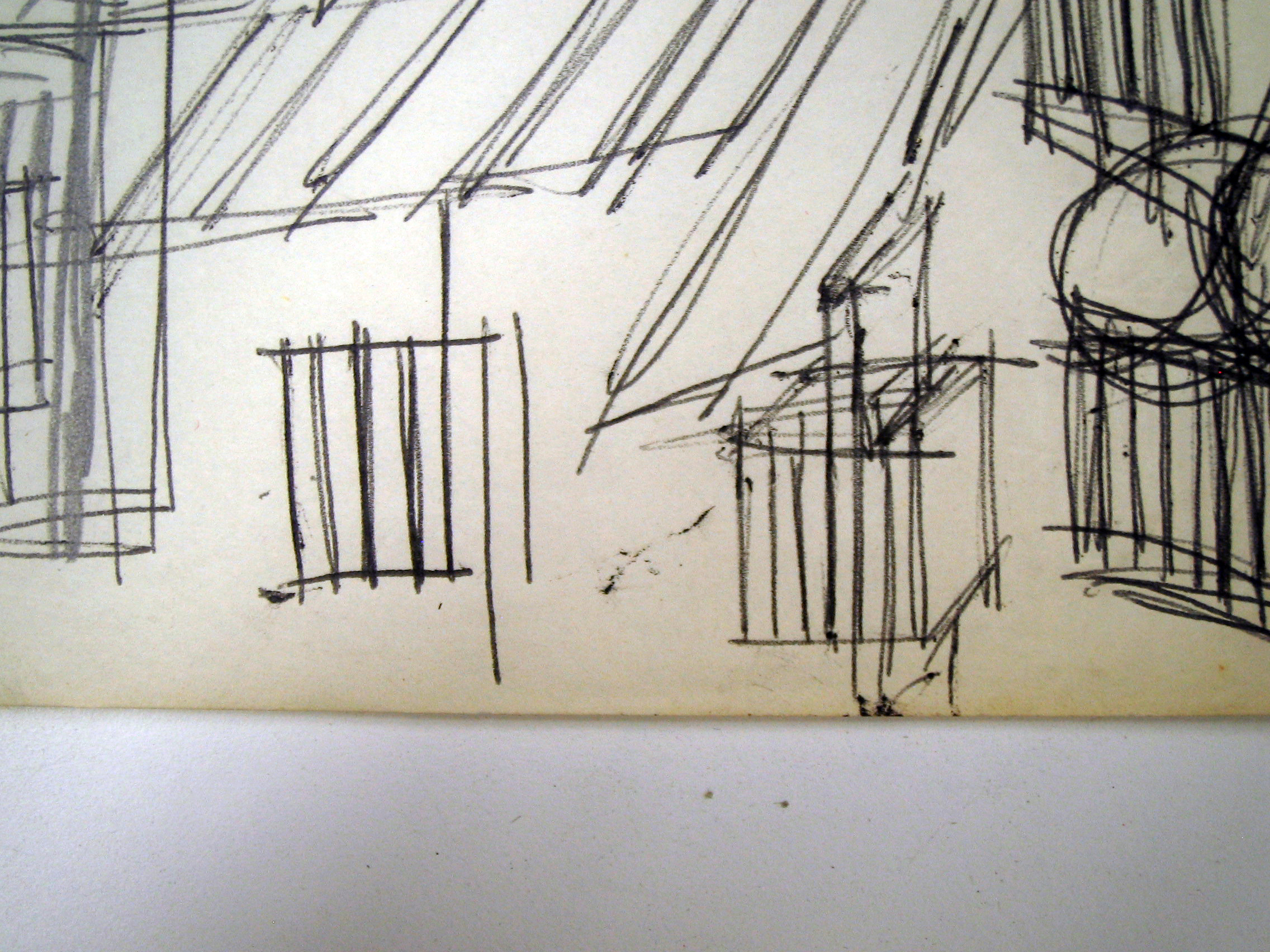 From complexity to simplicity: the goal of all effective communications design. The masthead letters of the MIT Press—“mitp”—rendered into their primal (pre-barcode-era) form. 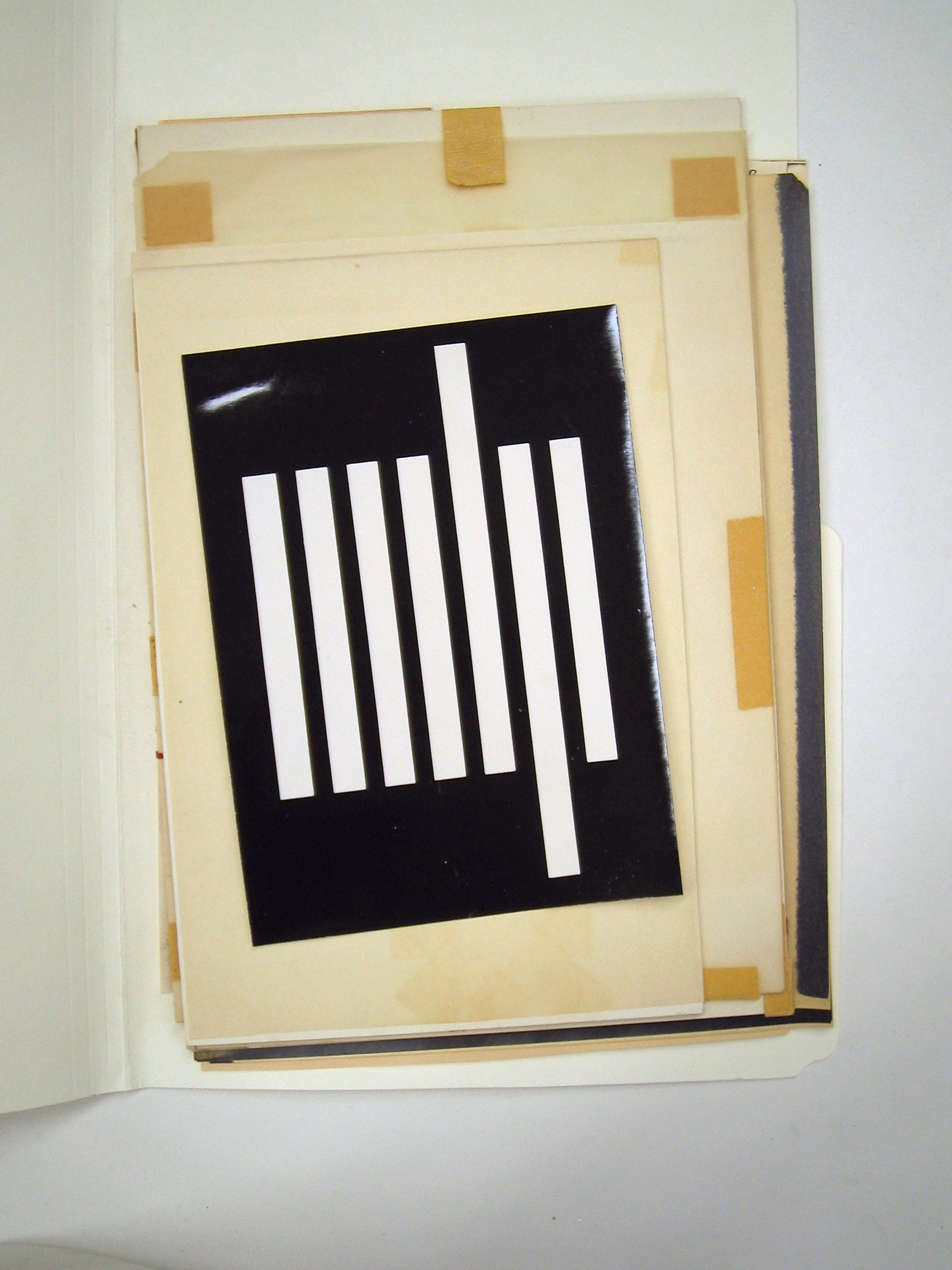 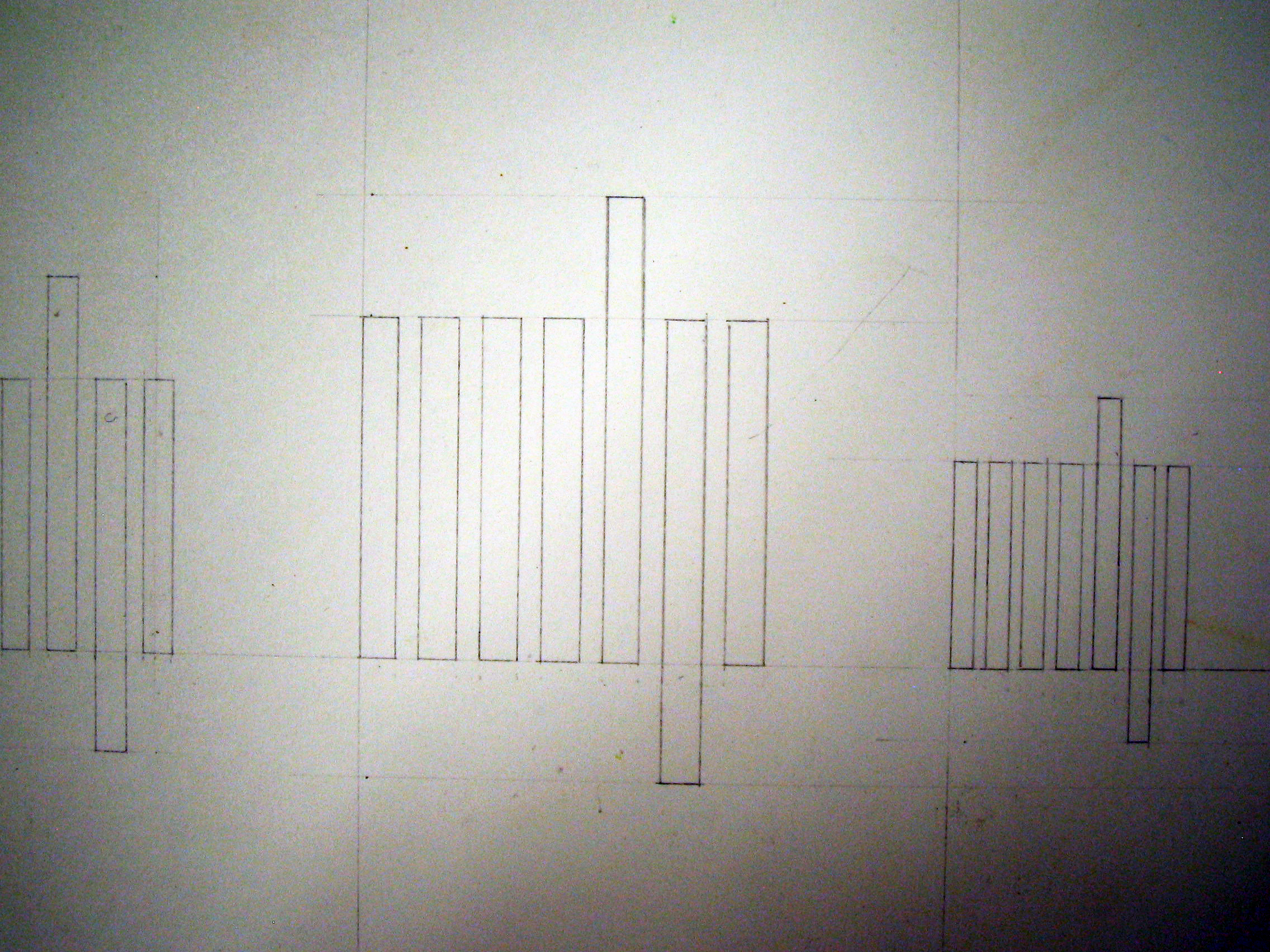 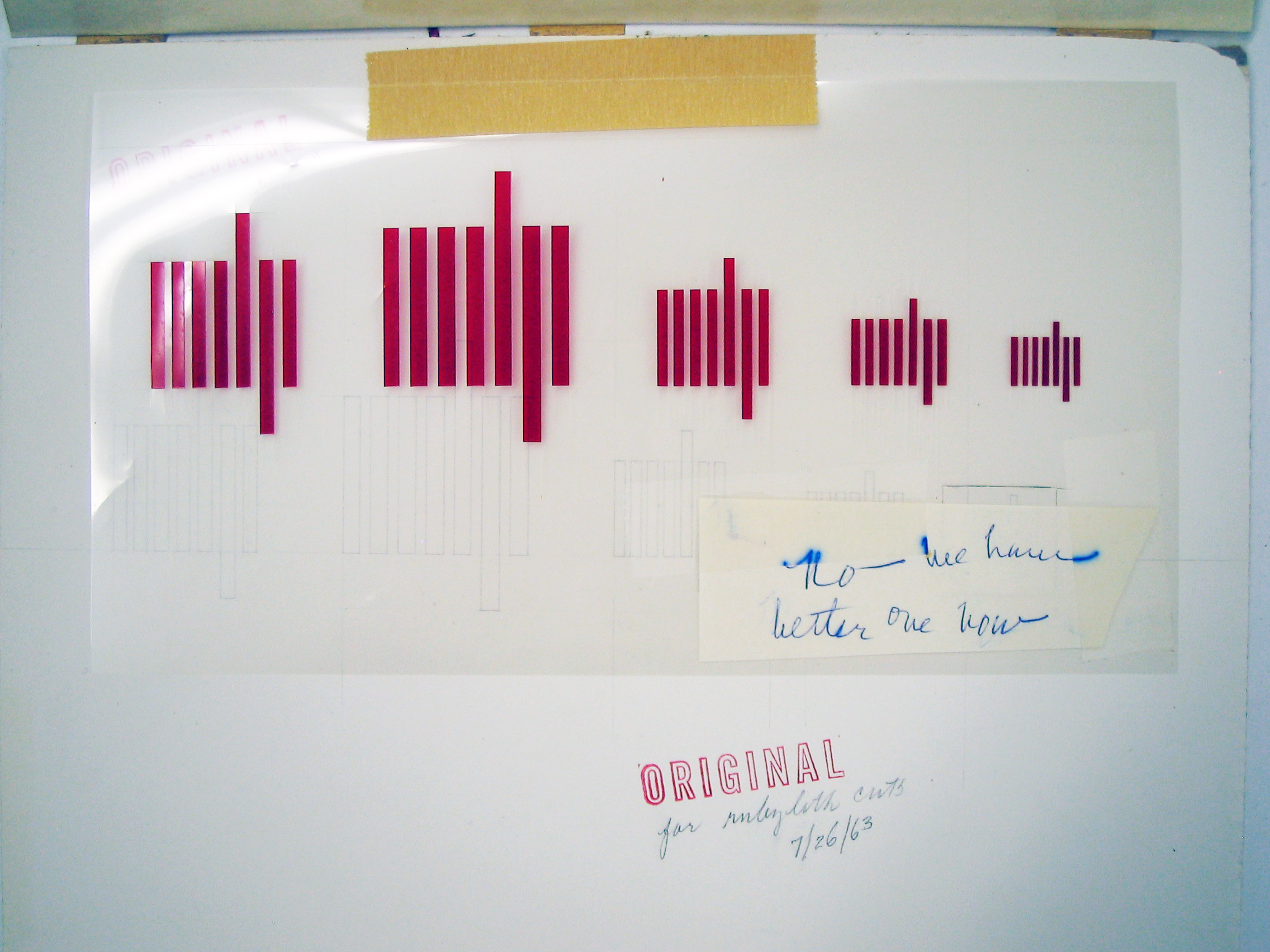 The “totalizing” approach to design that Cooper brought to the Press (in which nothing escaped the design mission, and advertising, brochures, and letterhead received attention alongside the books that the Press published) already bore the legacy of the Bauhaus, which had made such an approach its guiding philosophy several decades earlier. But the modernism that the school embodied can be seen in kernel form in Cooper’s colophon: an embracement of the aesthetics and approach that mass production had introduced to the twentieth century, as well as a rejection of the emotional expressionism endemic to the German Expressionists that had immediately preceded the Bauhaus. It is thus completely fitting that the MIT Press book that not only officially made The MIT Press forever known as a “design press,” but remains one of Cooper’s biggest legacies in book design, is the 1969 publication of the English adaptation of Hans Wingler’s Bauhaus: Weimar, Dessau, Berlin, Chicago (later released in a paperback edition in 1978). 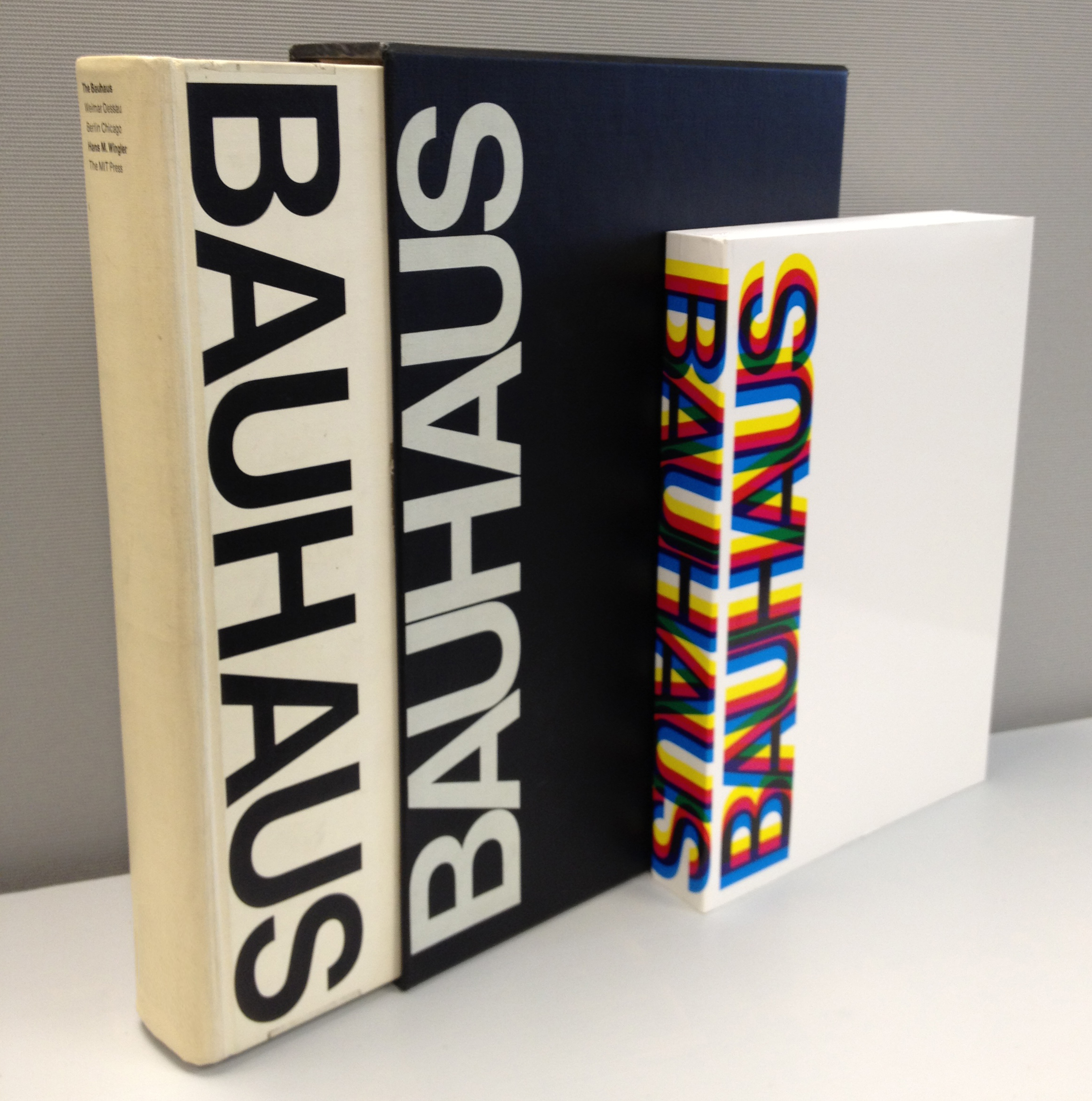 While the stature (and physical size) of this book tends to overshadow other MIT Press books that had been overseen by her, a number of which deserve more attention than they currently receive (the award-winning 1965 study of highways, The View from the Road by Donald Appleyard, Kevin Kynch, and John R. Myer for example), the amount of work that went into Bauhaus was enormous, and Cooper and the rest of the MIT Press devoted years of in-house preparation to seeing the book into print. The work involved in laying the book out can be seen in two panoplies of page proofs: one behind Cooper in a photograph circa 1976, the other in a 1969 promotional poster that had been made for the book: 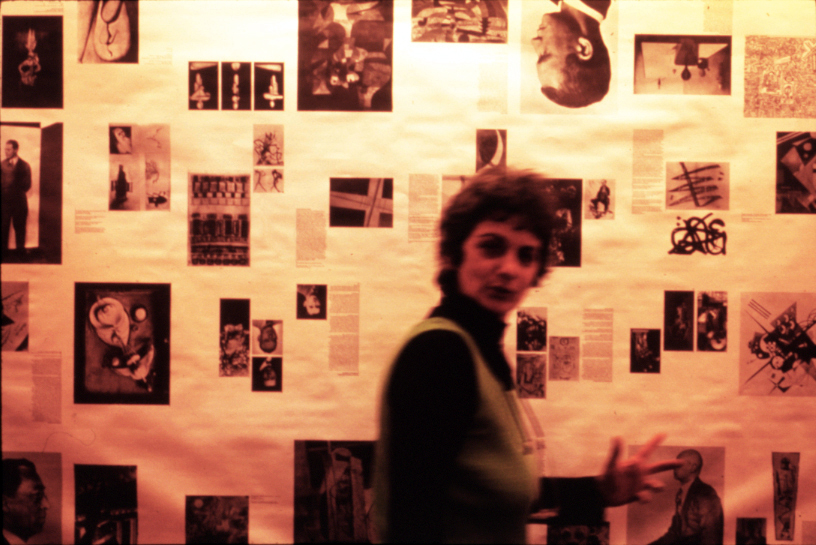 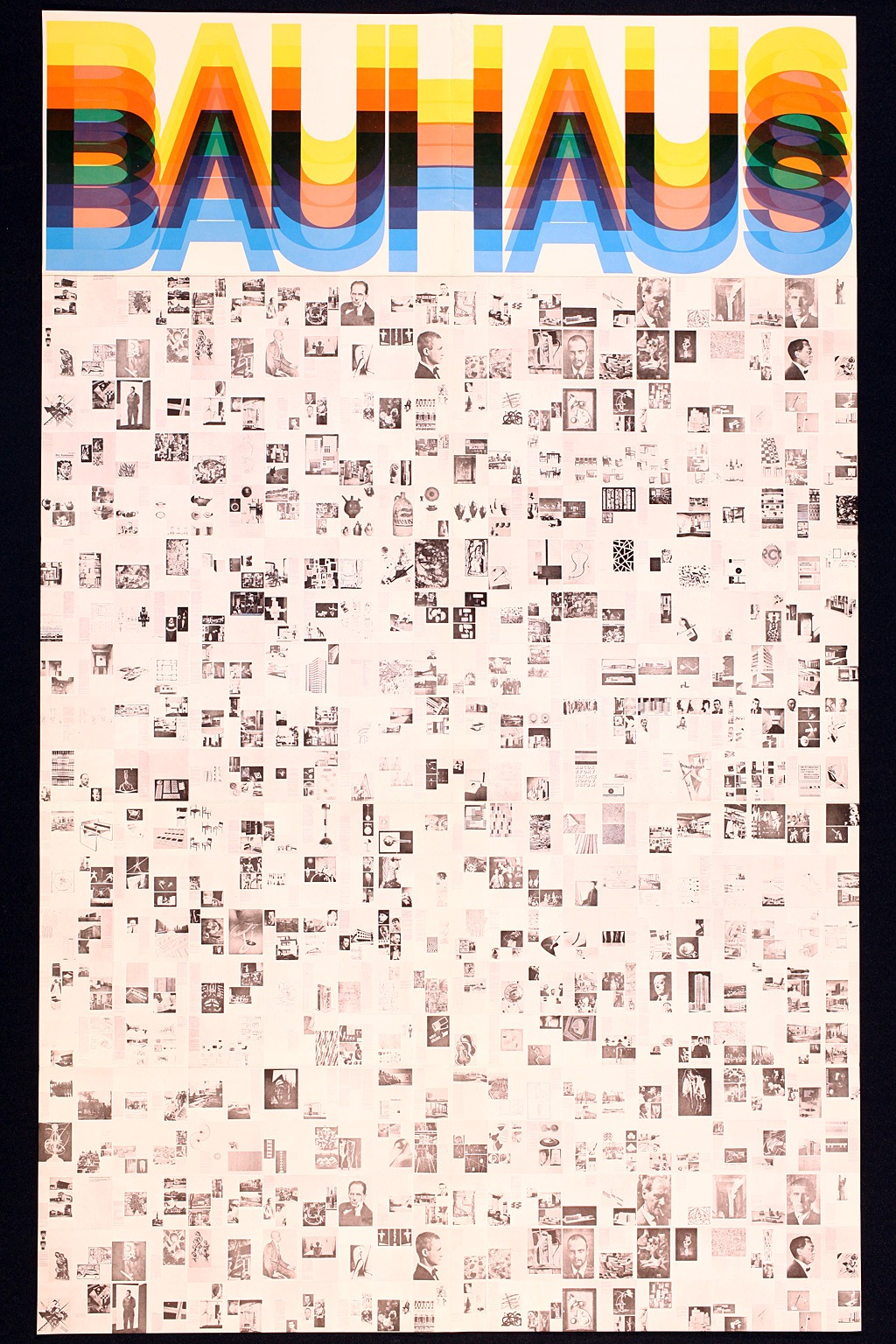 Cooper herself saw the book as a linchpin to her career, and would use the results of Bauhaus in her later teaching; at one point, she made a 16mm film of the book, composed of one frame of film for each spread in the book. It is a viewing that only lasts a little over a minute, but visually outlines in a snapshot manner the fundamental grid lying at the base of most book design. Though the original film appears to be lost, David Small of Small Design Firm, Inc., recreated the film as a video when he was a student in the MIT Media Lab.

Here are some little-known photographs of Muriel Cooper in the MIT Press offices, circa 1976–1977: 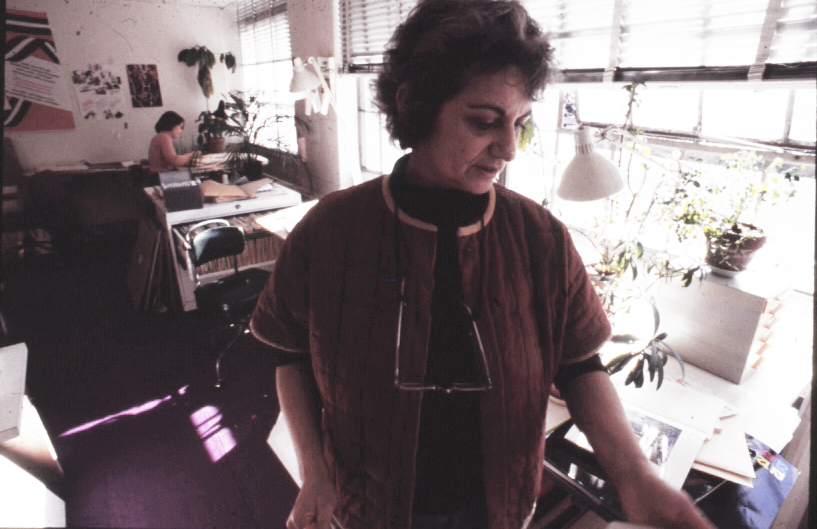 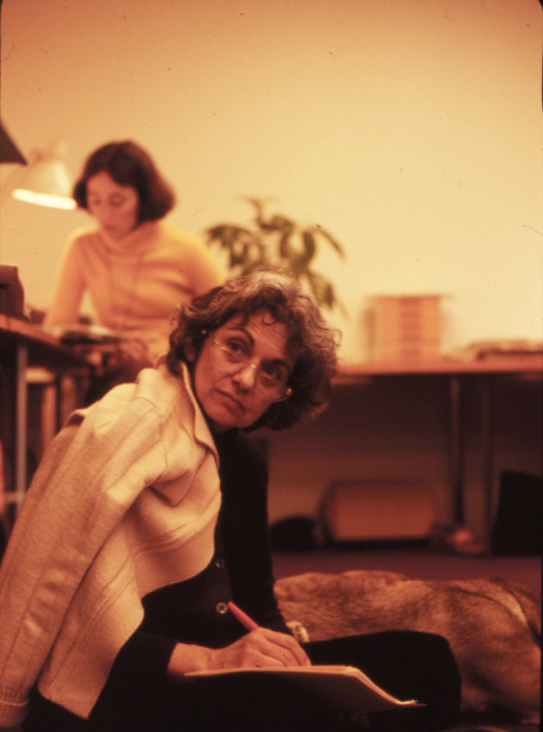 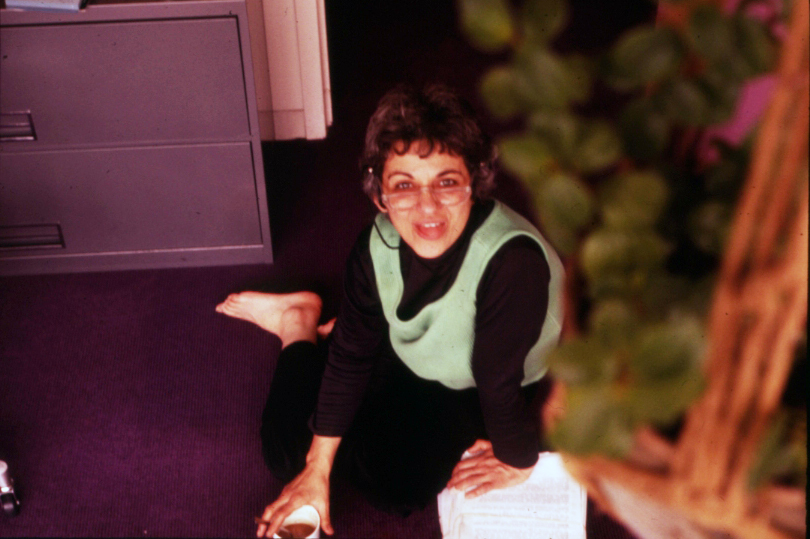 Cooper’s legacy and reputation goes far beyond her work at The MIT Press, of course: her role in uniting design, computer science, and media production is a story that has taken longer to receive attention, and may well prove to be her bigger legacy. This later direction had its roots in a computer science class she took at MIT in 1967 with Nicholas Negroponte; a class that, by her own admission, “bewildered” her. In a true indication of what separates a true pioneer from a mere woman of talent, this bewilderment—which at that point in time would have reasonably led anyone to turn tail and retreat back to the design studio—became the starting-point for her engagement in a new frontier to explore. After leaving The MIT Press in the mid-1970s (where she would continue to play a role as a “Special Projects Director”), she cofounded the MIT Visible Languages Workshop. 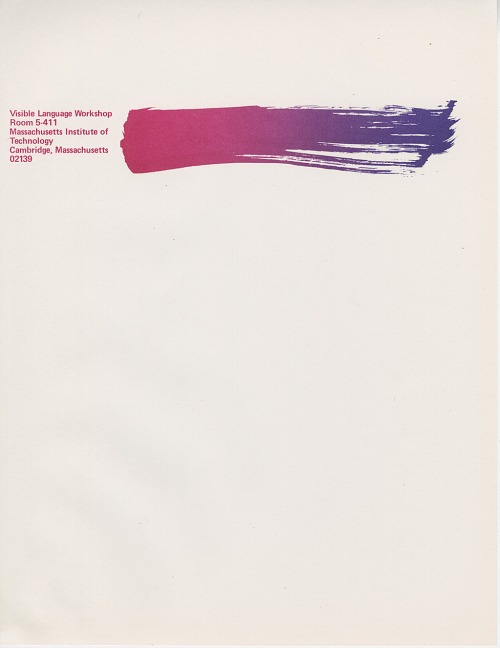 The Workshop would combine with other departmental bodies in 1985 to form the MIT Media Lab, where she would be an influential professor, and would continue her interest in developing a user interface for personal computers, exploring computer typography, and what she would describe to some colleagues as the realization of a three-dimensional book experience. Her early, unexpected death of a heart attack in 1994 cut short a career that obviously had still much to offer.

(Muriel Cooper toward the end of a photo shoot in 1988)