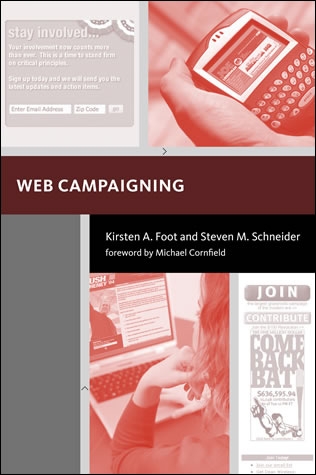 September brings us another month closer to the 2012 election (where did summer go?). We’ll be posting election-related content each Tueday as we count down to Election Day.

Today’s Election Tuesday post is by Steven M. Schneider and Kirsten A. Foot, authors of Web Campaigning, and explains how the use of the Web in political campaigns has changed (and also stayed the same) since the early 2000s.

The 2012 campaign represents the high-water mark of online political action. The sheer quantity of Web sites and online apps dwarf what we saw online just two or three cycles ago. We have moved far from 1990s-era “virtual billboards” (D’Alessio, 1997), and even well beyond the email-address gathering, volunteer-form laden, “roll your own Website” era exemplified by the 2004 Dean campaign (Trippi, 2004). It is safe to say that, beginning with the 2008 Obama primary and general election campaign efforts, and spreading almost ubiquitously by 2012 to many federal and even state-level candidates, online structures facilitating connection through social networking sites like Facebook have redefined  the candidate Web site.Yet in many respects, much of what we see in the 2012 cycle — especially on the Web — extends what we observed in the early 2000s. Hardly revolutionary: We might even call the 2012 online campaign “politics as usual” (Margolis & Resnick, 2000).

In Web Campaigning, we argued that what campaigns do on the web can be analyzed through four practices: informing, involving, connecting, and mobilizing—and that these practices remain relatively stable over time. As the Web has moved from its producer-centric first generation to a platform emphasizing sharing and co-production, Web producers have increasingly sought to mobilize site visitors and to connect them with other supporters and organizations, rather than simply involve or inform them. Mobilization as a practice, first hinted at in the 2000 McCain primary campaign, became the dominant motif in the 2008 Obama campaign, and is the primary practice in many 2012 efforts.

As a result of the dramatic expansion of mobilizing, several techniques that emerged in 2008 have become de rigueur in 2012. The familiar Facebook and Twitter icons invite visitors to interact with their friends and followers, pushing campaign materials into a realm far outside the control and oversight of candidate organizations. “Sharing” is the behavioral successor to the “linking” technique we observed in 2004 and before. In the 2012 cycle, campaigns engage in what we called “co-production” far beyond what was imagined or thought strategic in the formerly-cautious world of campaign Web managers.

Finally, we should comment on the area of tremendous growth (and to date, largely unexplored) online campaigning: the world of the apps. As our online world moves beyond the Web to cloistered apps accessed from tablets and smart phones, the challenge for scholars to identify practices and define techniques requires new methods and new tools. While scholarship from the 2000s focused on the Web as an object of study; scholarship in this decade and the next should focus on the screen as the object of study. Such an effort will require new approaches to observation and analysis.

Trippi, Joe. 2004. The Revolution Will Not Be Televised: Democracy, the Internet, and the Overthrow of Everything. New York: Harper Collins.