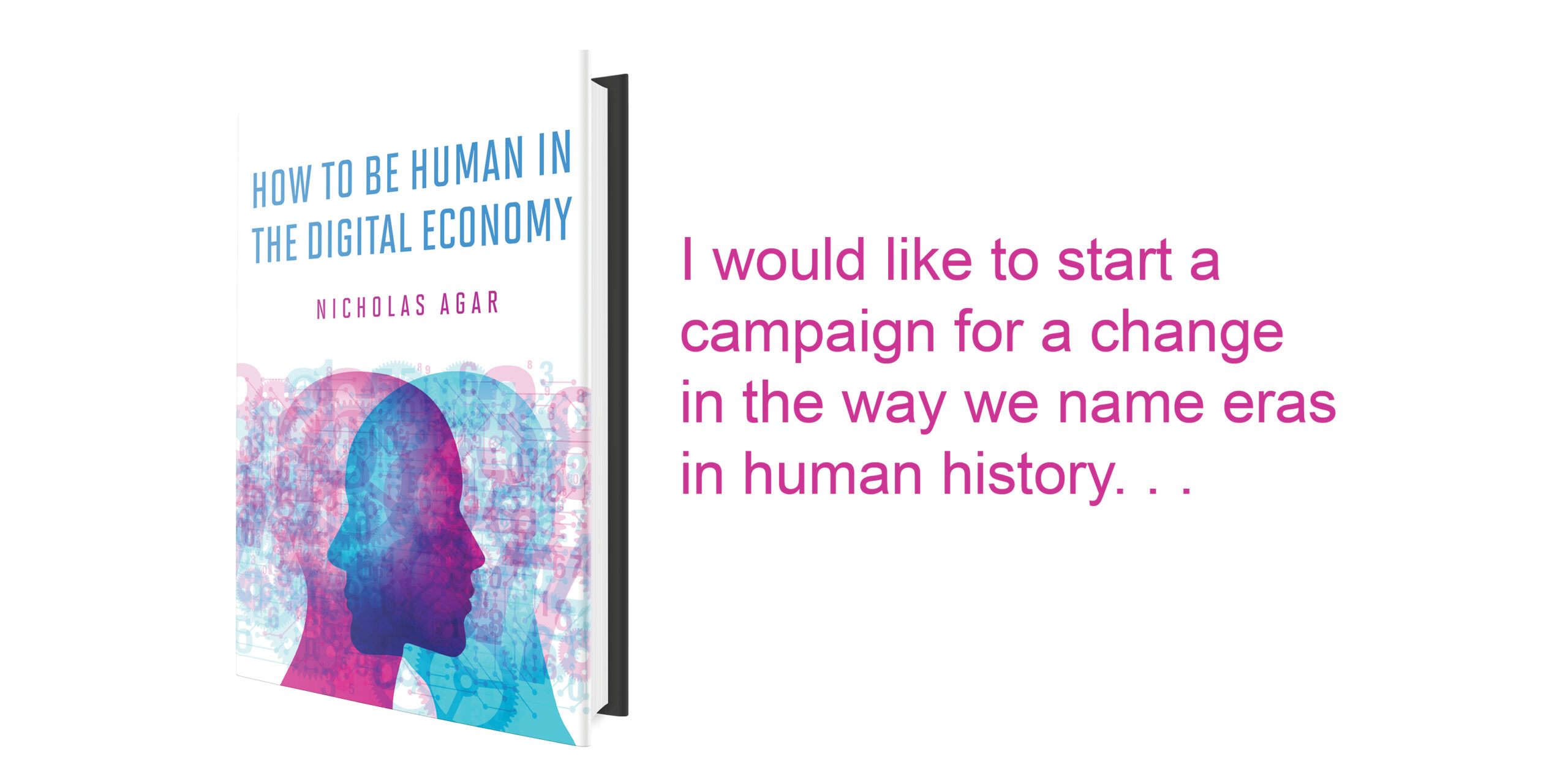 There is a campaign to rename our current geological epoch. According to convention in geology, we are in the Holocene Epoch—a name formed out of the Ancient Greek words for wholly new. The Holocene dates from about 12,000 years ago. Some geologists think we should acknowledge that we have passed into a new epoch—the Anthropocene Epoch, a name that indicates the significance of human impacts on the planet’s geology and ecosystems.

I would like to start a campaign for a change in the way we name eras in human history.

The Digital Revolution—defined as widespread and rapid replacement of mechanical and analog electronic technologies by digital technologies—is transforming human lives. Ground zero for these upheavals and transformations is the digital computer. But the revolution’s effects reach far beyond the stereotypical desktop word processor. Digital technologies are radically changing the ways that we share information, travel, treat disease, and party. An observable acceleration in the power of computers suggests that the transformations and dislocations we are currently experiencing are just the beginning.

Technological revolutions are more than just interesting events in human history. They are history’s motors. The Renaissance jurist, statesman, and advocate of science, Francis Bacon, made an emphatic statement about the significance of technological advances to human affairs. Writing about the significance of his own age’s big technological innovations—“printing, gunpowder, and the magnet”— he said “no empire, no sect, no star seems to have exerted greater power and influence in human affairs than these mechanical discoveries.” The Digital Revolution is influencing human affairs and seems set to have even greater influence. Thrilling gadgets and apps are merely its most visible manifestations.

Technological change is the driver of human history. We name our historical eras for their dominant technologies. We progressed through the Stone Age, the Bronze Age, and the Iron Age. The Industrial Age was named for the technologies of the Industrial Revolution. And so, we arrive at the Digital Age, an age defined by the technological package of the networked digital computer.

How to be Human in the Digital Economy explores a way to inhabit the Digital Age that is less in awe of its spectacular technologies. We must more fully acknowledge the economic value of what humans do for each other. We need a social economy that rewards the benefits we offer to complete strangers and upon which today’s diverse societies of millions depend.

It would be appropriate to name the age we will enter as the Social Age, named for the significance to human affairs of social interactions. We would reject the suggestion that “social” be coopted as the name for a very profitable category of digital technologies—the social networking technologies of Facebook, Twitter, LinkedIn, and so on. Rather it would indicate the significance to our collective human experience of relationships between human minds.

Digital technologies will be essential for much that happens over the next decades. But we may come to recognize that relationships between human minds nevertheless have a greater significance to who we are both individually and collectively. We could move on from the Digital Age to the Social Age in recognition of this general change in attitude.

The name “Anthropocene Epoch” suggests a negative evaluation of human accomplishments. We are a principally negative force interfering with the benign natural processes that defined the Holocene. We cause mass extinctions, pollute the seas, and emit lots of CO2. The choice of the name “Social Age” for a coming age in human history indicates a more positive evaluation of what we are jointly capable of.

Excerpt adapted from How to Be Human in the Digital Economy (2019) by Nicholas Agar.