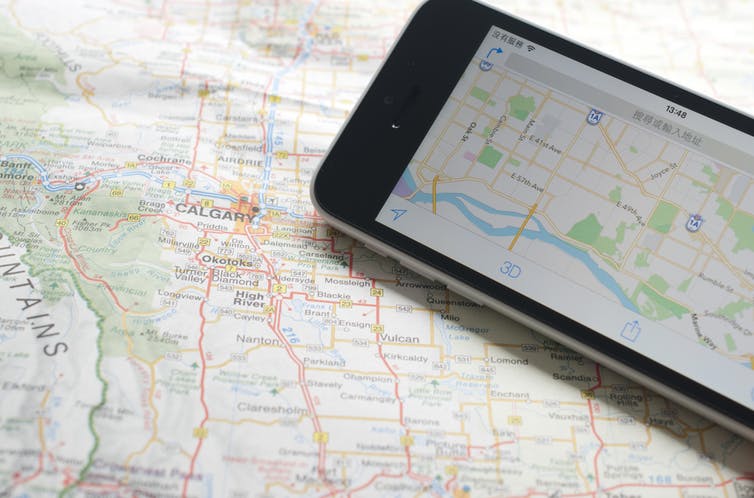 Ted Florence is ready for his family trip to Botswana. He has looked up his hotel on Google Maps and downloaded a digital map of the country to his phone. He has also packed a large paper map. “I travel all over the world,” says Florence, the president of the international board of the International Map Industry Association and Avenza Maps, a digital map software company. “Everywhere I go, my routine is the same: I get a paper map, and I keep it in my back pocket.”

With the proliferation of smartphones, it’s easy to assume that the era of the paper map is over. That attitude, that digital is better than print, is what I call “technochauvinism.” In my book, “Artificial Unintelligence: How Computers Misunderstand the World,” I look at how technochauvinism has been used to create an unnecessary, occasionally harmful bias for digital over print or any other kind of interface. A glance at the research reveals that the paper map still thrives in the digital era, and there are distinct advantages to using print maps.

Your brain on maps

Digital interfaces are good for acquiring surface knowledge. Answering the question, “How do I get from the airport to my hotel in a new-to-me city?” is a pragmatic problem that requires only shallow information to answer. If you’re traveling to a city for only 24 hours for a business meeting, there’s usually no need to learn much about a city’s layout.

When you live in a place, or you want to travel meaningfully, deep knowledge of the geography will help you to navigate it and to understand its culture and history. Print maps help you acquire deep knowledge faster and more efficiently. In experiments, people who read on paper consistently demonstrate better reading comprehension than people who read the same material on a screen. A 2013 study showed that, as a person’s geographic skill increases, so does their preference for paper maps.

For me, the difference between deep knowledge and surface knowledge is the difference between what I know about New York City, where I have lived for years, and San Francisco, which I have visited only a handful of times. In New York, I can tell you where all the neighborhoods are and which train lines to take and speculate about whether the prevalence of Manhattan schist in the geological substrate influenced the heights of the buildings that are in Greenwich Village versus Midtown. I’ve invested a lot of time in looking at both paper and digital maps of New York. In San Francisco, I’ve only ever used digital maps to navigate from point to point. I’ll be the first to admit that I don’t know where anything is in the Bay Area.

“When the human brain gathers visual information about an object, it also gathers information about its surroundings, and associates the two,” wrote communication researchers Jinghui Hou, Justin Rashid and Kwan Min Lee in a 2017 study. “In a similar manner to how people construct a mental map of a physical environment (e.g., a desk in the center of an office facing the door), readers form a ‘cognitive map’ of the physical location of a text and its spatial relationship to the text as a whole.”

Reading in print makes it easier for the brain to encode knowledge and to remember things. Sensory cues, like unfolding the complicated folds of a paper map, help create that cognitive map in the brain and help the brain to retain the knowledge.

The same is true for a simple practice like tracing out a hiking route on a paper map with your finger. The physical act of moving your arm and feeling the paper under your finger gives your brain haptic and sensorimotor cues that contribute to the formation and retention of the cognitive map.

Technochauvinists may believe that all digital maps are good, but just as in the paper world, the accuracy of digital maps depends entirely on the level of detail and fact-checking invested by the company making the map.

For example, a 2012 survey by the crowdsourcing company Crowdflower found that Google Maps accurately located 89 percent of businesses, while Apple Maps correctly found 74 percent. This isn’t surprising, as Google invests millions in sending people around the world to map terrain for Google StreetView. Google Maps are good because the company invests time, money and human effort in making its maps good – not because digital maps are inherently better.

Fanatical attention to detail is necessary to keep digital maps up to date, as conditions in the real world change constantly. Companies like Google are constantly updating their maps, and will have to do so regularly for as long as they continue to publish. The maintenance required for digital content is substantial – a cost that technochauvinists often ignore.

In my view, it’s easier to forgive the errors in a paper map. Physical maps usually include an easily visible publication date so users can see when the map was published. (When was the last time you noticed the date-of-last-update on your car navigation system?) When you are passively following the spoken GPS directions of a navigation system, and there is, say, an unmarked exit, it confuses the GPS system and causes chaos among the people in the car. (Especially the backseat drivers.)

The best map for the job

Some of the deeper flaws of digital maps are not readily apparent to the public. Digital systems, including cartographic ones, are more interconnected than most people realize. Mistakes, which are inevitable, can go viral and create more trouble than anyone anticipates.

For example: Reporter Kashmir Hill has written about a Kansas farm in the geographic center of the U.S. that has been plagued by legal trouble and physical harassment, because a digital cartography database mistakenly uses the farm’s location as a default every time the database can’t identify the real answer.

“As a result, for the last 14 years, every time MaxMind’s database has been queried about the location of an IP address in the U.S. it can’t identify, it has spit out the default location of a spot two hours away from the geographic center of the country,” Hill wrote. “This happens a lot: 5,000 companies rely on MaxMind’s IP mapping information, and in all, there are now over 600 million IP addresses associated with that default coordinate.”

A technochauvinist mindset assumes everything in the future will be digital. But what happens if a major company like Google stops offering its maps? What happens when a government shutdown means that satellite data powering smartphone GPS systems isn’t transmitted? Right now, ambulances and fire trucks can keep a road atlas in the front seat in case electronic navigation fails. If society doesn’t maintain physical maps, first responders won’t be able to get to addresses when there is a fire or someone is critically ill.

Interrupting a country’s GPS signals is also a realistic cyberwarfare tactic. The U.S. Navy has resumed training new recruits in celestial navigation, a technique that dates back to ancient Greece, as a guard against when the digital grid gets hacked.

Ultimately, I don’t think it should be a competition between physical and digital. In the future, people will continue to need both kinds of maps. Instead of arguing whether paper or digital is a better map interface, people should consider what map is the right tool for the task.

Meredith Broussard is assistant professor of journalism at New York University and author of Artificial Unintelligence: How Computers Misunderstand the World.