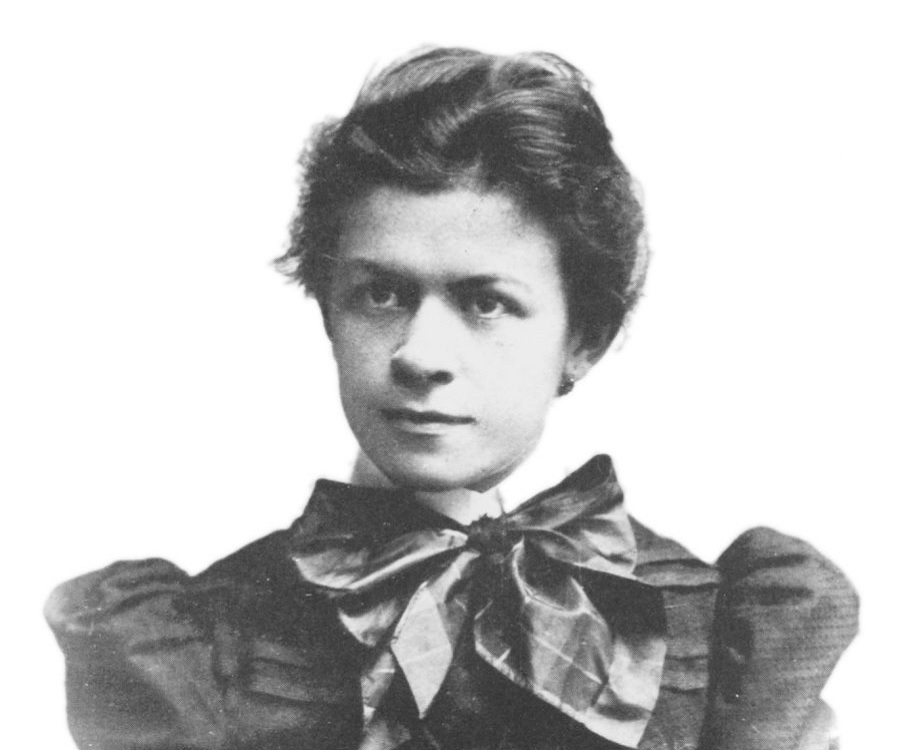 Albert Einstein’s first wife, Mileva Einstein-Marić, was forgotten for decades. Einstein’s Wife:  The Real Story of Mileva Einstein-Marić reexamines the history of this unknown woman. “Hers is a story that is not often told,” writes co-writer Allen Esterson, “Yet, when closely examined, it provides important and valuable insights into the struggle of this determined woman then, and for some even nowadays, for status and recognition in science.” She tragically did not achieve her full potential as a scientist or teacher, nor did she realize her hopes and dreams in marriage and in life, yet her story deserves to be told and her legacy honored.

In Ruth Lewin Sime’s featured essay below, she offers historical context for some of the obstacles women in science faced in the early twentieth century.

Warning: This excerpt contains discussion of suicide which may be triggering to readers.

Marić’s story resonates with us, and for good reason. We recognize the determined girl in a school for boys, the confident student who set her sights on a career in physics, the passionate young woman who wanted an egalitarian marriage. We understand that Mileva was pushing the limits of what girls and women were allowed to do, and that she and women like her succeeded in bringing about change for others. By the turn of the twentieth century, Germany and Austria-Hungary, the Western European states most resistant to the idea of higher education for women, finally opened their universities to women students. Education was an essential step toward equality for women, but it was only the first. If a woman wanted to pursue a career in science, there was no obvious path for her to follow. Even the most brilliant and ambitious women encountered formidable social and institutional barriers that would remain in place for generations, with effects that are still noticeable today.

It is important to remember that there have always been women who were scientists and mathematicians. Long before women had access to universities or even much schooling, there were individuals of great creativity, even genius, who were acclaimed by their peers and remembered by historians; the list includes Laura Bassi, Emilie du Chatelet, Sophie Germain, Mary Somerville, Sofia Kovalevskaia. Most women scientists learned from family members and worked in domestic surroundings, because that is where most scientific practice took place.  Caroline Herschel, for example, assisted her brother with his astronomical observations and became an important astronomer in her own right.  Maria Mitchell learned astronomy from her father and gained international recognition for discovering a new comet, the first American to do so. Marie Anne Paulze Lavoisier worked with her husband in the chemistry laboratory in their home, their partnership captured in a stunning double portrait by Jacques-Louis David. Historians have uncovered many such women; very likely there are many more whose names we do not yet know.

In the nineteenth century scientific practice became increasingly professionalized, and more gender-segregated. To the extent that a scientist was expected to be a man with a full-time paid position outside the home, science itself came to be seen as intrinsically masculine, and women, however well educated, were left out. Women occupied whatever scientific niches were available to them, often in jobs that were essential but regarded (and paid) as if they were peripheral. They worked as illustrators, librarians, textbook writers, technicians, and assistants. They were professors in women’s colleges, where they taught, did research, and campaigned for women’s rights. They were hired by observatories, industrial laboratories, and government facilities as human “computers,” in groups that were entirely segregated by gender and at times by race. They were recruited for the Manhattan Project and then dismissed when the war was over. They clustered into research fields that were more receptive to women, including radioactivity, X-ray crystallography, and astronomy.  And, quite often, they joined their husbands in collaborative scientific marriages, much as Mileva and Albert envisioned in their student days.

One of the most successful and visible marital collaborations was that of Marie and Pierre Curie. In 1903, when they were awarded the Nobel Prize in Physics (with Henri Becquerel) for their discoveries in radioactivity, the public reaction was a mixture of excitement and disbelief that a woman, wife, and mother could be an important scientist.  By the time the Czech American biochemists Gerty and Carl Cori were awarded the 1947 Nobel Prize in Physiology or Medicine (with Bernardo O. Houssay) for their studies of carbohydrate metabolism, high-level women scientists were no longer a complete rarity, but it is notable that for both Nobel couples, in France and the United States, some forty years apart, it was the husband who had position and status while the wife made do in marginal jobs. This pattern persisted for much of the twentieth century, and it applied to couples who did not collaborate directly, such as the German American theoretical physicist Maria Goeppert-Mayer and her American husband Joseph Mayer, a physical chemist. For the first thirty years of their marriage Joe was a distinguished university professor while Maria held a series of adjunct positions, even though she was internationally recognized for her theoretical work in quantum physics and nuclear physics. In 1960 both Joe and Maria accepted professorships at the University of California, San Diego, and in 1963 Maria was awarded the Nobel Prize in Physics (with J. Hans D. Jensen) for the discovery and development of the nuclear shell model. A local newspaper headline, “La Jolla Mother Wins Nobel Prize,” shows just how unimaginable it still was, sixty years after Marie Curie’s first Nobel Prize, for the words “scientist” or “physicist” to be used when referring to a woman.

We know less about unsuccessful scientific couples, but one exceptionally tragic instance is quite well documented. When Clara Immerwahr married the physical chemist Fritz Haber she had a doctorate in physical chemistry from Breslau University (in 1900, eight years before women were officially accepted as students), several publications, and an intense desire to continue scientific research. Clara hoped she and Fritz would be able to work together, but that did not take place and their marriage was unhappy. In 1915, when Fritz was home in Berlin for a few days on leave from the war, Clara killed herself with his service pistol. Although some writers have interpreted Clara’s suicide as a protest against her husband’s leadership in developing poison gas warfare, existing documents indicate that she had long been despondent about her failed marriage and her loss of identity as a scientist.

Of the first generation of university-educated women scientists, many chose to remain single in order to devote themselves to their work. Even so, relatively few had untroubled careers, even when their achievements were extraordinary. Emmy Noether is regarded as one of the most important mathematicians of the twentieth century, known for her far-reaching innovations in modern abstract algebra and for profoundly influencing the development of modern physics with her solution to the problem of energy conservation in Einstein’s general theory of relativity. For most of her twenty-five years of professional life in Germany, primarily in Gottingen, she did not have a paid university position, despite the efforts of her colleagues. For years the university would not allow her to undergo Habilitation, the qualification process for an academic position, for no reason other than her gender. It was not until 1933, when she was forced to emigrate due to Nazi racial policies, that Noether had a position with a decent salary. She accepted a professorship at Bryn Mawr, a women’s college near Philadelphia, and maintained contact with Einstein and other colleagues in Princeton until her untimely death in 1935.

The Austrian physicist Marietta Blau pioneered the use of photographic emulsions for imaging high-energy nuclear particles and events. In 1937 she and a co-worker, Hertha Wambacher, found that heavy nuclei in the emulsion had been explosively disintegrated by cosmic radiation, a discovery that dazzled the nuclear physics community and launched the field of particle physics. Blau worked in Vienna at the Institute for Radium Research, where more than a third of the scientists were women. Although none of the researchers had regular paid positions, the men could undergo “habilitation” while very few women did; when Blau inquired about it she was told, “Woman and Jew: that is too much.” Her lack of academic standing made her emigration difficult. After leaving Vienna in 1938 she was unable to do research in her field for the next ten years, and by the time of her death she and her work had been almost entirely forgotten.

Lise Meitner, a native of Vienna, made her professional home in Berlin, where she worked in radioactivity, pioneered the new field of nuclear physics, and, with the chemists Otto Hahn and Fritz Strassmann, was a co-discoverer of nuclear fission. Meitner’s interdisciplinary partnership with Hahn was essential for her start, giving her a place to work and a chance to prove herself at a time when women had no prospects for a position in academic research. Once underway, her career was extraordinary: in 1913, a permanent appointment in the Kaiser Wilhelm Institute for Chemistry; in 1917, her own section for physics in the Institute, the equivalent of a university professorship; habilitation in 1922 and an adjunct professorship at the University of Berlin in 1926—each step a milestone for the inclusion of women into German science. In the 1920s Einstein liked to call her “our Marie Curie,” an acknowledgment of Meitner’s importance in the Berlin physics community and her international prominence. When she escaped from Germany in 1938 she went to Stockholm, where she was given an entry-level position without a laboratory or the resources to work as she had before. Exile shattered Meitner’s career, diminished her reputation, kept her from a Nobel Prize, and eventually clouded her place in the history of twentieth century science.

Of the early generations of women scientists, nearly all experienced difficulties in their professional lives and many were severely under-recognized. Women scientists were doubly outsiders: as women they were unconventional, as scientists they were not fully accepted in a traditionally male domain. That left them vulnerable, not among the close friends and colleagues who knew them and understood their work but in the wider scientific community and beyond. This was Meitner’s situation in Sweden, where she was viewed primarily as a woman and a foreigner rather than as a prominent physicist with multiple Nobel nominations who could contribute to Swedish science.

Marie Curie was similarly vulnerable. After the 1903 Nobel Prize, some imagined that she was just her husband’s helper or, more romantically, his muse. When Pierre Curie died in 1906 and Marie was appointed to his professorship in the Sorbonne, there were people who assumed that widowhood was her main qualification for the position. And in 1911, just as she was awarded her second Nobel Prize—this time in chemistry, for the discovery of polonium and radium, and the isolation of elemental radium—she was being vilified in the press because of her affair with a married colleague. Curie was never elected to the French Academy of Sciences; it took years before she became the iconic figure everyone recognizes today.

It took generations before women scientists began to be perceived as normal, both as women and as scientists. The process is still underway. As recently as 2005 the president of Harvard University publicly speculated that “issues of intrinsic aptitude” might be holding women back.  We are still worrying about the paucity of women and minorities in mathematics, the physical sciences, engineering, and technology, still wondering when everyone with the ability and desire for a life in science will have the opportunities they need to succeed. Looking back, we seek a deeper understanding of the many women who also dared to hope and work for a life in science, as did young Mileva.

Ruth Lewin Sime is Professor Emerita in the Department of Chemistry at Sacramento City College.

Excerpted from Einstein’s Wife: The Real Story of Mileva Einstein-Marić by Allen Esterson and David C. Cassidy, with a contribution by Ruth Lewin Sime, The MIT Press, 2019.