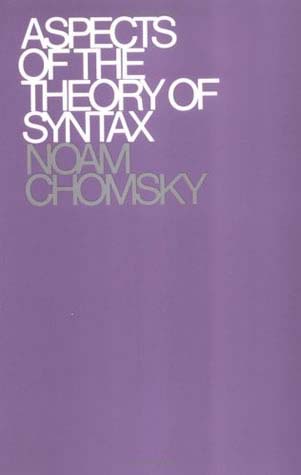 For day 7 of our 50th anniversary series, David Pesetsky, Head, Linguistics Section, Department of Linguistics and Philosophy, MIT, reflects on Aspects of the Theory of Syntax by Noam Chomsky:

Rereading Noam Chomsky’s Aspects of the Theory of Syntax almost a half-century after its 1965 publication, I found myself equally startled by two contradictory observations: how breathtakingly modern this book remains, and how old-fashioned it has become.

Aspects was actually the second book by Chomsky to revolutionize the study of language. It was preceded in 1957 by Syntactic Structures, which showed how a small set of formal tools could provide a simple model for astonishingly complicated facts about English syntax (most of which had gone unnoticed until then). Thanks to a glowing review in the journal Language, Syntactic Structures was widely read. Overnight, Chomsky’s “transformational grammar” became an area of intensive research. The pace of discovery was extraordinarily rapid. Paper after paper presented brand-new discoveries about syntax, prompting many hotly debated revisions of the basic model.

But what was this new field actually all about? Why should we care about the best description of a group of verbs, or the position of an adjective? It was Aspects that offered some answers—so compelling and incisive that they continue to ground our research to this very day. Aspects set the following goals for linguistics:

1. Language makes “makes infinite use of finite means” (a phrase from Humboldt that Aspects made famous). The right theory of language “must describe the processes that make this possible.”

2. The minute one examines the facts of language, one is struck by the incredible complexity of linguistic phenomena—yet every normally developing child masters this complexity at a very young age, effortlessly. Compounding the puzzle is the inescapable fact of linguistic diversity. Languages differ enormously (different vocabulary, different word orders, a different array of constructions) yet any child can acquire any one of them. The right theory of language must therefore be “sufficiently rich to account for acquisition of language, yet not so rich as to be inconsistent with the known diversity of language.”

3. The devil is in the details. The right theory of language must be “perfectly explicit”—what Chomsky called a “generative grammar.” As in any science, linguistic hypotheses must predict, and therefore explain, the facts.

These are the goals that most of us in linguistics pursue to this very day, hence the breathtakingly modern feel of this great book. At the same time, although Aspects was the first work to articulate the central tension between the ease of language acquisition (explainable if much of language is innate) and linguistic diversity (explainable if much of language is not innate), and though Chomsky spent many pages “eating his own dog food,” by working out the details—I am also struck by how many of these details have been superseded and replaced by newer, better ideas.

But this is actually the most important sign of success, not failure, for this great book. The fact is, in 1965 very little was known about how children actually acquire language, and almost nothing was known about the extent and limitations of cross-linguistic diversity in syntax. In the wake of Aspects, the last half-century of linguistics has been marked by an enormous explosion of knowledge in both domains. And just as Aspects teaches us, this means that the details of our “perfectly explicit” theory had to change to match our new knowledge—with Chomsky himself in the forefront of many of these developments. The greatest works in science contain a timeless core, but if they are worth anything at all, they also contain the seeds of their own obsolescence—because the greatest works are those that launch a living field, and living fields do not stand still. So it is with Aspects.