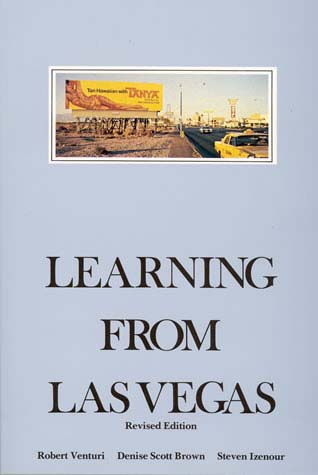 The Lessons of Las Vegas

“From the start, we faced the question, ‘Well, what did you learn?’ and our answers have shifted over the years, with our lives. Our own generation met with disbelief our claim that LLV was part social tract and replied ‘You’ve got to be kidding.’  But in the last decade, we’ve noted a change in tone in our questioners. Today, some young architects are taking up where we left off, often in exciting ways.”
—Denise Scott Brown, 2010

“When Robert Venturi and Denise Scott Brown boarded a plane bound for Las Vegas in 1968 with a dozen of their Yale architecture students in tow, there were no multimillion-dollar water shows or pirate ships waiting for them. There were no van Goghs in the hotel galleries. Nor could residents of the city live in tilting condo towers designed by Helmut Jahn and shop in a mall by Daniel Libeskind.

Whatever glamour Las Vegas had was all veneer. Mr. Venturi and Ms. Scott Brown, who had just married and would soon be business partners, were on a search for a way out of the dead end of postwar Modernism, whose early hopes had by then deteriorated into a dreary functionalism. The book they produced four years later, Learning From Las Vegas, was one of the last of the big architectural manifestos and a heartfelt embrace of American popular culture that would be hard to imagine anyone attempting today.”
—Nicolai Ouroussoff, The New York Times

Roger Conover, Executive Editor of Art, Architecture, and Visual & Cultural Studies, writes, “Learning From Las Vegas was also one of the first big architecture publications bearing the imprint of MIT Press. The original, hardcover edition, its title stamped in gold letters on a cloth cover visible through a semi-opaque glassine dust jacket, was designed by Muriel Cooper in 1972,  pre-dating the smaller re-designed (by the authors) edition which remains in print today. The original edition of Learning From Las Vegas is one of the most sought-after collectibles on MIT’s backlist, commanding thousands of dollars when it turns up in rare book dealers’ catalogs.”

Matthew, a bookseller at William Stout Books: “Venturi, Scott Brown and Izenour’s Learning From Las Vegas has been a constant best seller at William Stout Architectural Books, and one we make sure we always have in stock. When students come in asking for seminal titles, this is always recommended. When we get the original edition, it is rarely in the store longer than a week.“