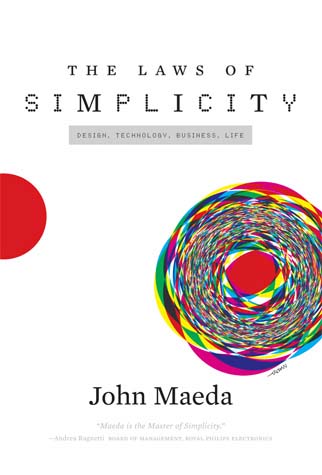 John Maeda reflects on The Laws of Simplicity for the 46th post of our 50th anniversary series:

To understand the ideas in The Laws of Simplicity, one needs to look no further than the Press’ logomark—designed by the late design visionary Muriel Cooper. It’s an elegant study in simplicity, meaning, and mystery. Paul Rand once commented on it, in his patently mischievous way, “It’s good enough that I would take credit for it.” Seven lines. Two of them out of sync. A vision of order (Law 2: Organize), with a little bit of sass (Law 7: Emotion).

As a freshman at MIT, I loved the graphic, and for many years wore a T-shirt emblazoned with the logo. Only years later, when I became a professor, did it hit me that the lines signified (or could signify) books. As Edward R. Murrow said, “The obscure we see eventually. The completely obvious, it seems, takes longer.” What Mr. Murrow describes—the ability to make something completely obvious and simple—isn’t easy at all.

I feel fortunate to have had the space in my life and mind to create The Laws of Simplicity. It helped to prepare me for the considerably greater complexity of my current role as president of the Rhode Island School of Design (RISD). I have recounted that experience of making the transition from professor to a leader of an institution in the book I wrote with Becky Bermont: Redesigning Leadership. What I learned is that the same artistic spirit that can create a gorgeous logo can be brought to leadership. And I relearned the lesson that simplicity is a complex practice that reveals opportunity for impactful design and ultimately, meaningful rewards.