If you’re looking to get one more camping trip before summer’s end, here are some recommendations from Martin Hogue, author of Thirtyfour Campgrounds.

There are 6,490 individual campsites depicted in the book Thirtyfour Campgrounds, culled from a network of nearly 20,000 facilities across the United States. The rigid arrangement of these sites intro grids of small photographs across 200 pages of the book produces an overwhelming impression of sameness: while specific textures of light, color and tone do emerge from each of these 34 landscapes (the light In Naples, Florida is completely different from that in Zion National Park, for example), the reader may also find that no single campsite is really discernible from its neighbors.

This graphic arrangement is by design: the photographic grids evoke a rigid spatial plat of nearly universal design features. Campsites are generally defined by an open, flat patch of ground, a picnic table, and a fire pit; these sites, and the parking spurs that lead to them, are grouped around one-way driving loops, where motorists, hauling gear and supplies, arrive daily to assume their role as campers, replacing other individuals, groups, or families who themselves departed only hours ago. The engineering of this spatial layout dates back to the 1930s and has changed little over time, or indeed from one campground to another.

The prospective camper/shopper trying reserve a campsite based on the online information provided by popular websites like reserveamerica.com or recreation.gov will no doubt come away with an impression similar to the one I experienced when I downloaded these thousands of photographs during the summer of 2014: is it possible to make truly sensible choices based on this information? These photos and diagrammatic maps seem both too much, and too little to make good decisions. Sometimes it’s a crapshoot, sometimes insider knowledge really helps.

Most campers will easily recall unique camping experiences. Great camping may involve scoring a great campsite: the space of the encampment itself, the proximity of neighbors, even the larger region surrounding the campground are but some of the factors involved in this kind of decision-making. Other times, great camping may involve less tangible qualities such as the weather on a particular day, or the food prepared on a given evening. To be sure, a great campsite is often a physical place, but its recall may also connect the camper to the story of a lazy afternoon, an evening campfire, a meal shared with other companions, or a prized moment of solitude.

In this spirit, here are 5 memorable campsites I’ve encountered over the last 15 years—and some of the reasons that made them so great:

H09 is bar-none the best campsite I have ever occupied. This a remote, hike-in site, located about a 10 minute walk from a gravel parking lot inside Schoodic Woods, a modern facility that opened in late 2015. Hike-in sites are a rare occurrence in modern campgrounds, since most campers desiring ease of access will find them inconvenient: gear, supplies, and even water, have to be carried in from one’s vehicle, which remains parked inside the confines of the main campground. It still amazes me that I was able to reserve this site with only 10 days’ notice, given that reservations at popular National Park facilities often fill up on the first day of availability, 6 months in advance in arrival. The presence of bears and other wildlife around Schoodic Woods requires dishes to be cleaned, waste disposed of, and food to be secured in specially constructed lockers after every meal. While all this might seem cumbersome to many, we felt the rewards more than outweighed the additional efforts: the most remote and isolated of the hike-in sites at Schoodic, H09 offered a view of ocean in the distance, and the complete, engulfing silence both day and night felt almost overbearing after days spent packed like sardines at Blackwoods campground, at the other end of Acadia National Park.

While not nearly as remote as Schoodic H09, a downhill stretch of 100 yards separates the parking spur along the automobile loop road from this campsite. For tent campers, cars inevitably constitute the heaviest piece of gear at the campsite (I say this because some modern tents may rival it in size), and not having your vehicle at arm’s length from the picnic table makes a big difference. Luckily, few campsites (including this one) open directly onto the bay, which acts the heart of the park and the campground—and for good reason: we were completely unprepared for the dramatic spectacle of a 18-20’ rise in tide between our arrival during the late afternoon and sundown. By the next morning, it seemed as if we could walk across the bay to the other side.

The 40 minute drive from Salt Lake City to Spruces, which features a tortuous 3,200 foot climb along State Route 190, is reason enough to visit. Camping here brings me back to an easier time, when we would set up our tent and eat lukewarm takeout food purchased along the way. The thin mountain air and the sounds of Big Cottonwood Creek running by the campsite made for great sleeping and a refreshing splash in the morning. There are few services at this campground (no showers, for example), but the nights spent there in 2002 and 2003 remain memorable to this day. 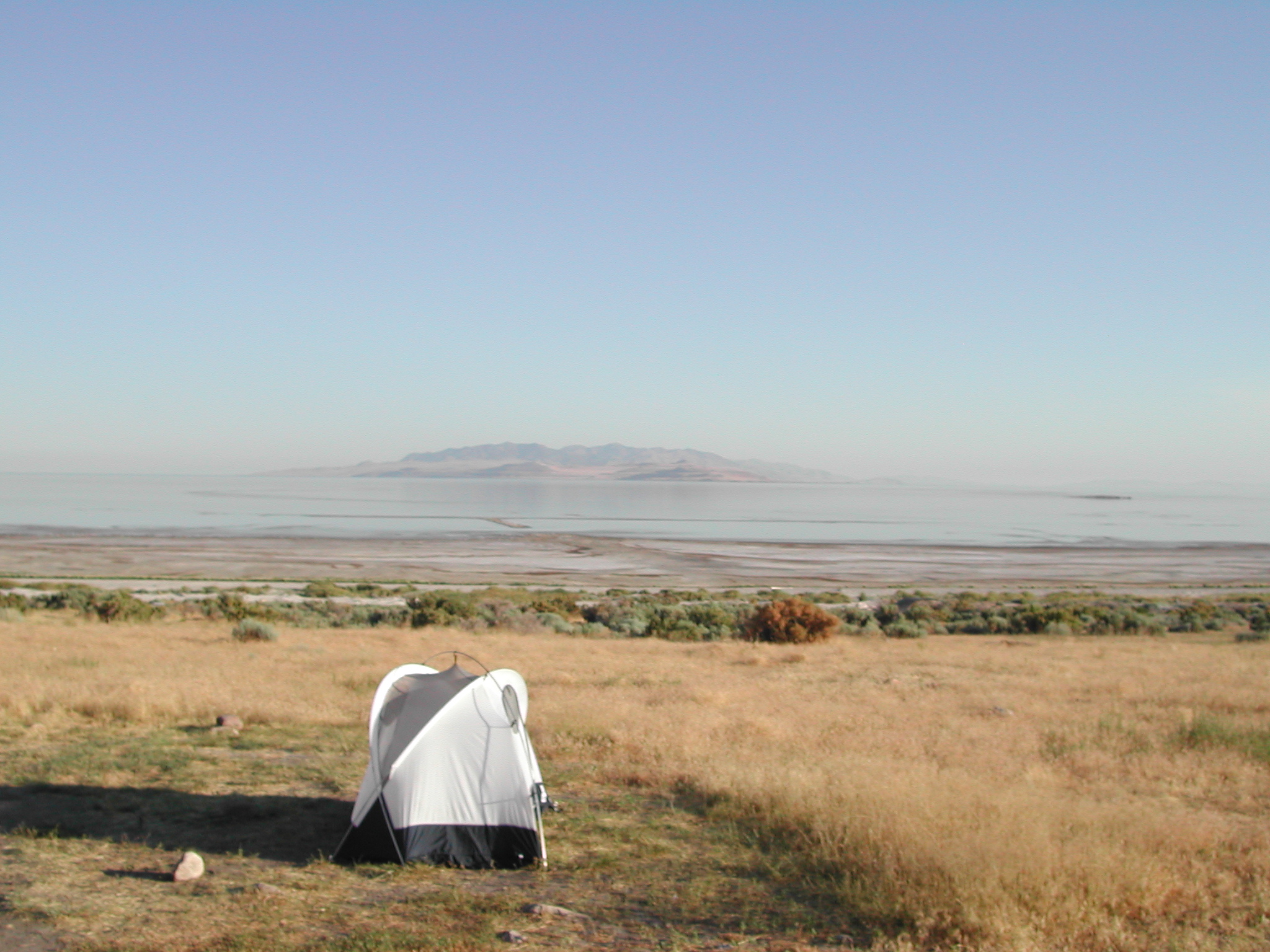 If Spruces 046 is an intimate, comfortably enclosed room, BB04 stands out for completely different reasons: the physical amenities at Bridger Bay are nothing special, but the setting, along the North shore of the Great Salt Lake’s largest island, is simply breathtaking. For all its explosive scenic power, however, there is no hiding away from the blazing, mid-day sun among these arid grasslands, and picnic tables here are protected by shading devices to provide some relief. The experience at Antelope Island also stands out because we used this campsite as a base from which to visit Robert Smithson’s Spiral Jetty for the first time. 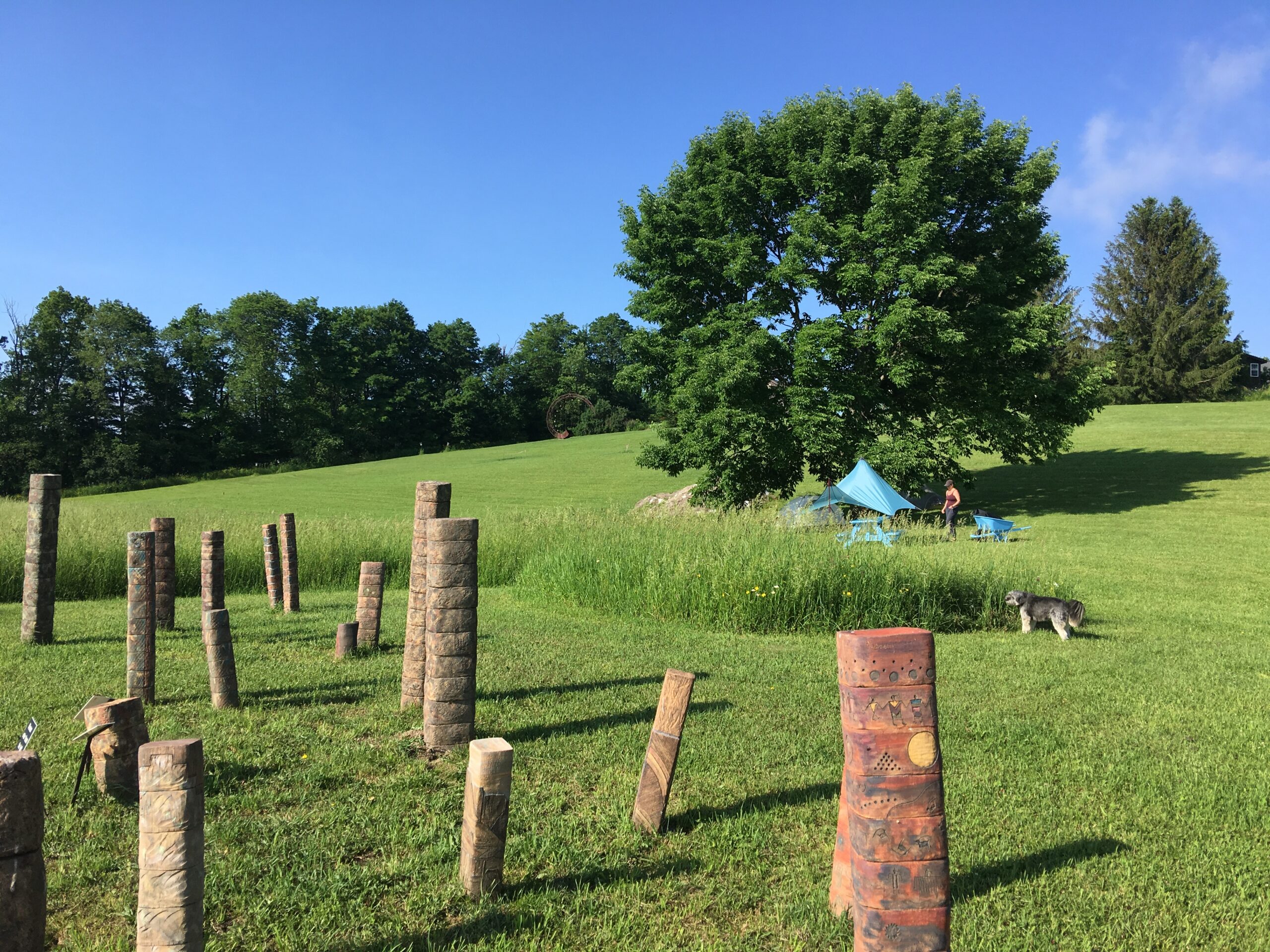 Can I say that I created this campground? As odd as it might seem, I had an opportunity to propose Camping at the Art Park as part of an artist residency at Stone Quarry Hill in June 2017. During the Fall of 2016, I walked the 104 acre property and carefully selected four campsites that highlight unique spatial opportunities, either in proximity of key sculptures, or dramatic vistas of or beyond the park. I used picnic tables to mark the individual sites, and painted them, as well as all related campground infrastructure (map, signage, flashlights, wheelbarrow), in a bright shade of cyan to enhance their coherence as a system inside the Art Park. I conceived Camping at the Art Park as a temporary installation, scheduled to take place during every weekend in June 2017, beginning on Friday afternoon and ending on Sunday morning. As they arrived at the Art Park, wheelbarrowed their equipment from the main parking area, pitched their tents and laid out their sleeping bags, the campers took on dual roles as both consumers and performers: even if the park is open 365 days a year from dawn to dusk, camping provided a unique opportunity to spend 48 uninterrupted hours within the landscape of the Art Park; at the same time, the campers themselves also became part of the art inside the park, which is to say that they and their encampments were on display for other visitors to see. Located under single walnut tree in an open field of tall grasses, site 2 was my favorite, and we had a chance to camp there with a good friend during the third of these four weekends.