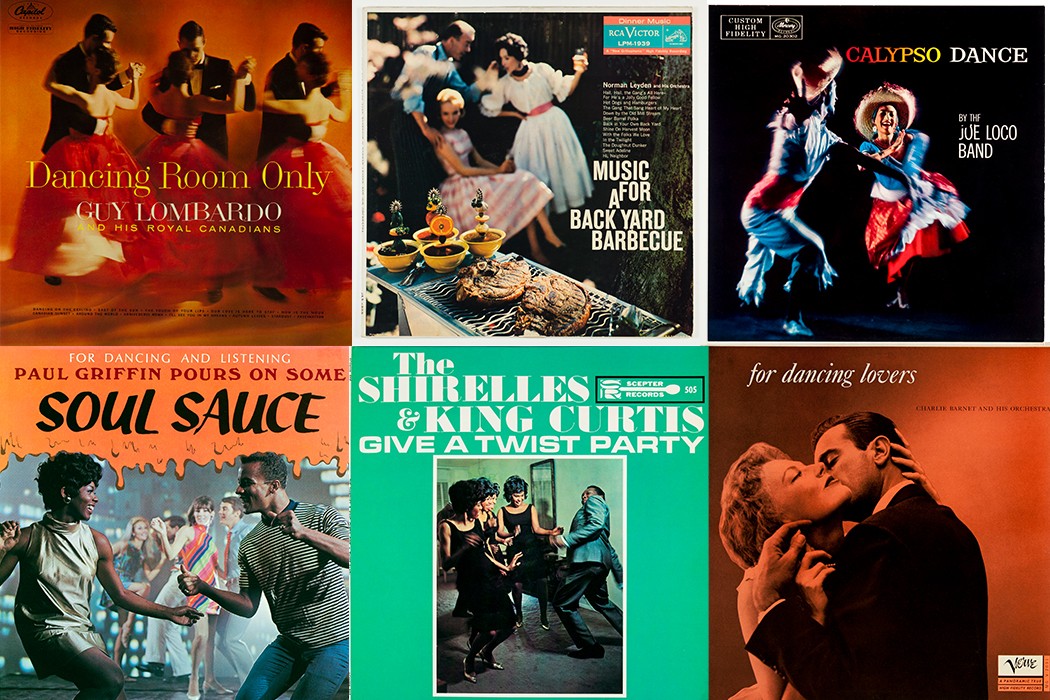 2022 marks the 40th anniversary of International Dance Day, and what better way is there to celebrate than with an exploration of dancing—and dancing records—of the past? In midcentury America, eager dancers mamboed in the kitchen, waltzed in the living room, and polkaed in the pavilion, instructed (and inspired) by dance records. Glorious, full-color record covers encouraged them: Let’s Cha Cha Cha, Dance and Stay Young, Dancing in the Street!, Limbo Party, High Society Twist.

In Designed for Dancing: How Midcentury Records Taught America to Dance, vinyl record aficionados and collectors Janet Borgerson and Jonathan Schroeder examine dance records of the 1950s and 1960s as expressions of midcentury culture, identity, fantasy, and desire.

“When you think about vinyl records, you might think about listening: sitting in a comfortable chair with a drink in your hand, letting the music entertain, distract, inspire. Plenty of record album covers show attractive and attentive listening, from the “bird” in the red modernist Bertoia chair on the classic midcentury LP Let’s Listen to the romancing young couple lounging on Richard Hayman’s Time for Listening,” Borgerson and Schroeder write. “Of course, records were also designed for dancing—a soundtrack to chasten chair dwellers and move them into motion.”

“Midcentury Americans sure did love that living-room shimmy,” said Fred Turner, author of The Democratic Sound. “This beautifully illustrated compendium reveals the long-forgotten cosmopolitanism and playfulness of Cold War America. It also makes you want to dance.”

Borgerson and Schroeder begin with the record covers—memorable and striking, but largely designed and created by now-forgotten photographers, scenographers, and illustrators—which were central to the way records were conceived, produced, and promoted. Dancing allowed people to sample aspirational lifestyles, whether at the Plaza or in a smoky Parisian café, and to affirm ancestral identities with Irish, Polish, or Greek folk dancing. Dance records featuring ethnic music of variable authenticity and appropriateness invited consumers to dance in the footsteps of the Other with “hot” Latin music, Afro-Caribbean rhythms, and Hawaiian hulas.

“Dancing develops creative outlets and connecting activities not only within but also between groups,” the authors argue. “Records for dancing oscillate between modernity—dancing the latest steps—and tradition—dancing ancestral steps—as they narrate a history of cultural influences, popular styles, and trends.”

Bought at a local supermarket, department store, or record shop, and listened to in the privacy of home, midcentury dance records offered instruction in how to dance, how to dress, how to date, and how to discover cool new music—lessons for harmonizing with the rest of postwar America.

Explore the musical stylings of just a few of these dance records with the playlist below, and celebrate International Dance Day with a look toward dancing of the past.

Learn more about Designed for Dancing