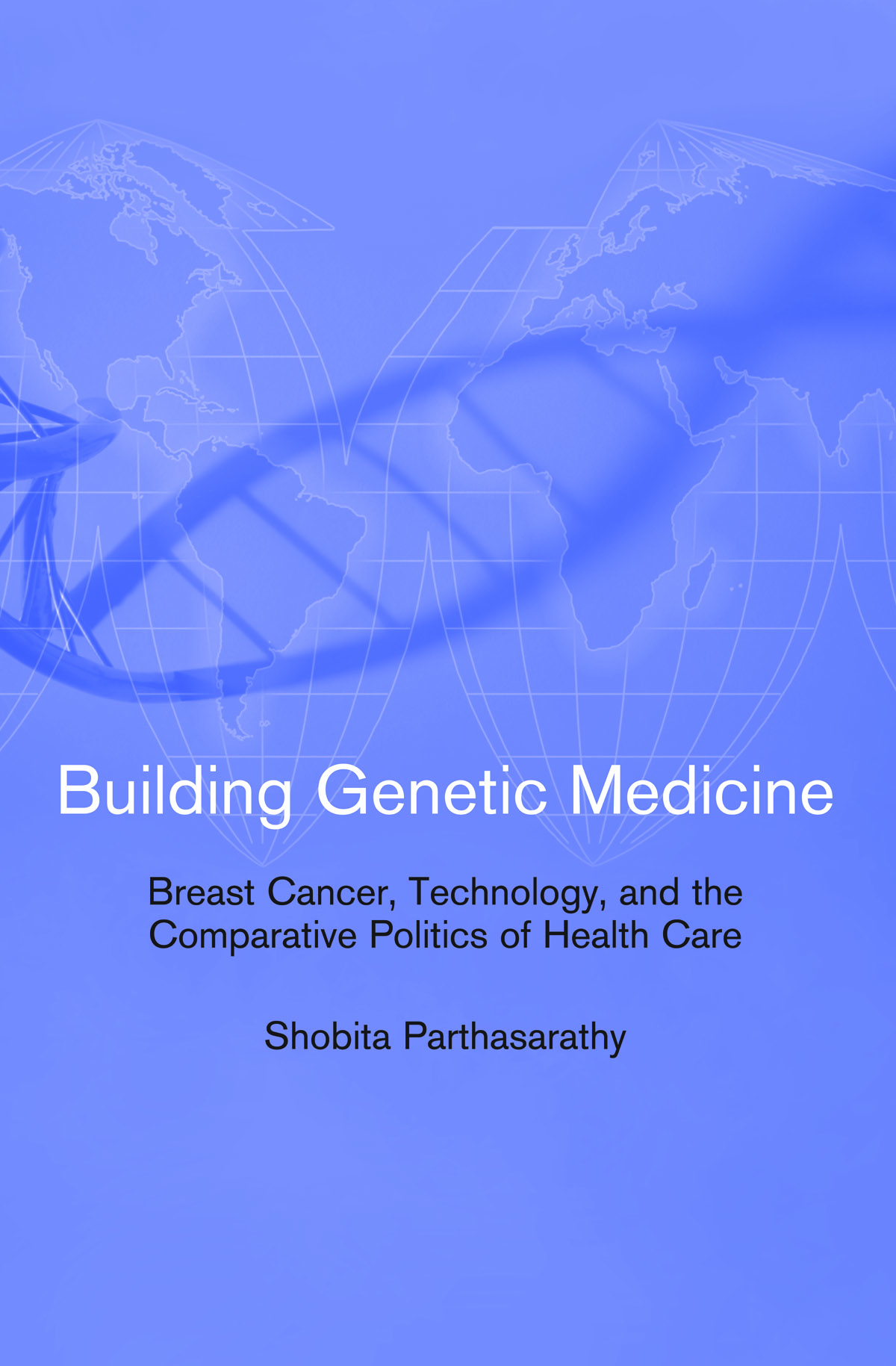 June 2nd is Cancer Survivor Day. Cancer affects millions of Americans in every demographical category. We’ve asked Shobita Parthasarathy, author of Building Genetic Medicine to take part in an Q & A to commemorate this special day.

The central argument surrounding the case is whether or not Myriad Genetics could patent the isolated breast cancer susceptibility genes BRCA 1 and BRCA 2. What are the potential impacts of the case?

If the Supreme Court rules that genes are “products of nature” and therefore unpatentable, this could make the lives of scientists, health care professionals, and patients easier but require companies and universities to rethink their business strategies. Scientists seeking to work on a particular gene will have fewer concerns about infringing someone’s patent. Genetic testing will likely become cheaper because more providers will be able to enter the market, as will genetic therapeutics (if and when they become available) because innovators won’t have to worry about paying royalties to the holder of the relevant gene patent. Meanwhile, companies and universities who have become accustomed to gene patents will still be able to get patents on methods related to finding a gene, and on gene-related technologies. Finally, it’s interesting to consider whether such a decision might have cascading effects; might patents on human embryonic stem cells, and other isolated cells and tissues, also be considered “products of nature”?

If the Supreme Court prohibits gene patents but allows patents on cDNA (a DNA sequence in which the “junk” sections have been removed), the situation becomes more complicated and unpredictable. Such a ruling might make Myriad’s gene patents invalid, but the Patent and Trademark Office (PTO) will still be able to issue patents on human genes that could have the same kinds of impacts on research and health care that Myriad’s had. However, the standards for receiving such a patent will likely be higher, particularly in the context of the PTO’s other requirements. So, we’ll then have to see how the PTO chooses to interpret the ruling in the context of existing law.

Finally, if the justices allow patents on either isolated genes or the cDNA sequences of those genes (or both), I don’t think that this controversy will end. This case has raised a series of extremely important questions about whether and how the patent system is serving the public interest, and what role the public should play in shaping the laws and policies related to patents. We have begun to ask not only whether patents are always good for stimulating innovation and economic growth, but also whether those should be the only expectations of the patent system and whether the decision making process within the patent system is appropriate and reflective of the public interest. At the end of the day, I hope that the case has stimulated a broad public debate that will generate serious policy reconsideration (with deep public engagement), because while the patent system seems technical and esoteric, it is enormously important in shaping not only our daily lives but our technological futures.

The recent media coverage related to Angelina Jolie’s article and to the pending Supreme Court case has hopefully increased public understanding of both the complexities of breast and ovarian cancer and the research and medical establishments devoted to alleviating these diseases. Jolie’s article highlights the fact that, despite decades of research into understanding and curing breast and ovarian cancer, women are still faced with brutal choices; the best way to minimize disease risk is still breast and ovary removal, which has painful medical and psychological consequences. It is also important to emphasize, however, that genetic risk is extraordinarily complicated. Only 5% of all breast cancers are caused by a BRCA mutation, and the risk conferred by a mutation varies by the specific mutation, by family, and by the environment. And while a woman with a BRCA mutation may have an 85% average risk over a lifetime, her average risk at age 50 is only 16% (and Jolie is only 37). So, we must be very careful not to over-rely on the importance of genetic risk information.

Hopefully this increased attention is also forcing us to reflect on our approach to breast and ovarian cancer research and treatment. Should we reorient our research funding strategies, as breast cancer patient advocates have long argued, towards direct improvement of health outcomes (rather than simply increasing scientific knowledge)? Should we rethink our approaches to patents if they might hurt innovation and make health care less accessible?

What would be the best way for the United States to make BRCA testing more widely available?

Before I answer that question, I should step back and note that the reduced access to testing is the result of not only Myriad’s patents and the company’s refusal to license these patents to other potential testing providers, but also its use of its patent-based monopoly to create a mutation database that contains information about the relationships between particular mutations and disease incidence. As a result of this situation, even when Myriad’s initial patents expire in 2017, the company will still likely maintain a monopoly; it has used its patent exclusivity to not only get new patents but also to control the data that is essential to interpreting the test results.

So how can we make BRCA testing more widely available given this context? The easiest way to make this happen is for the company to stop enforcing its patents, and for it to make its database public. If both of these things happen, then more laboratories will offer the test (many have already said they would do so). This will bring the testing cost down and, probably, increase use. But even if we increase test uptake, it is important to remember that this test is likely to be useful to a small number of people and that in order to understand the results properly, individuals and their families should seek the help of a specialist in clinical genetics.

Why is it important to do comparative case studies when evaluating a country’s health care system? How would you rank the U.S.?

When countries try to improve health outcomes, reduce health care costs, or increase access to health care, they invariably focus on public policy. But detailed comparative case studies can show how the development and design of technologies can have enormous and important implications. The comparative approach I take in Building Genetic Medicine allowed me to demonstrate that the US and UK value clinical services related to genetic testing rather differently, in large part because of different approaches to the commercialization of science and to the appropriate shape of the health care marketplace. While this difference may seem minor, it shapes both whether and how individuals can access BRCA testing and how they are likely to understand and evaluate their genetic risks. In sum, by focusing only on policy—and ignoring technological detail—we can lose many opportunities for intervention and improvement.

Because of their narrow focus, comparative case studies of technologies can also reveal national differences in norms, values, priorities, and politics in a uniquely nuanced way. This is important because we might easily assume that countries have similar goals when it comes, for example, to health care, making it easy to evaluate against and borrow from one another. But my book shows that even the definition of a good health outcome differs between the US and UK. In sum, it is difficult to rank the US in the context of other countries offering genetic testing because there is little agreement on standards. If our priority is easy but expensive access to DNA testing of the BRCA genes, then the US approach is best. But if our priority is providing laboratory testing in the context of specialized clinical genetics services to high risk individuals at low to no cost, then the UK and European approaches are better.