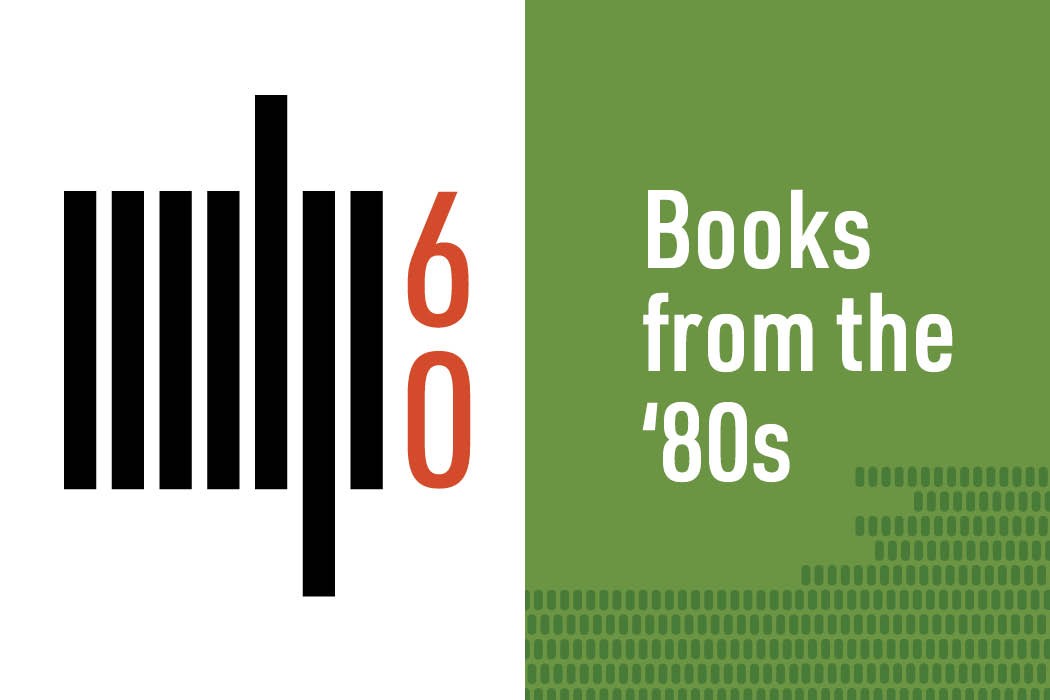 To celebrate the 60th anniversary of the MIT Press, we are highlighting key moments of our publishing history from the 1960s to present day—beginning with our favorite book covers of the ‘60s and acclaimed female authors of the ‘70s. Today we turn to our retrospective of the 1980s.

The ‘80s was a time of flux in the United States and worldwide, and with change comes opportunity for innovation and out-of-the-box thinking. The decade brought to print some of the most enduring works in the MIT Press’s history—like W. Edwards Deming’s classic work on management, Sherry Turkle’s primer on the psychology of computation, and Rosalind E. Krauss’s exploration of postmodern and avant-garde art—and helped shape our program as a leader in bold, intellectually daring, and illuminating publishing.

Explore these big ideas below, and stay tuned throughout the year as we celebrate our 60th birthday—sharing pieces of Press history and selections of our books and work over the decades. (You can also share a photo of you with your favorite MIT Press book at happy60mitp@mit.edu for the chance to be featured on our social media.)

The Second Self, Twentieth Anniversary Edition: Computers and the Human Spirit by Sherry Turkle (Originally published in 1984)

In The Second Self, Sherry Turkle looks at the computer not as a “tool,” but as part of our social and psychological lives; she looks beyond how we use computer games and spreadsheets to explore how the computer affects our awareness of ourselves, of one another, and of our relationship with the world. “Technology,” she writes, “catalyzes changes not only in what we do but in how we think.” First published in 1984, The Second Self is still essential reading as a primer in the psychology of computation. This twentieth anniversary edition published in 2005 reconsiders two decades of computer culture—(re)experiencing what was and is most novel in our new media culture and viewing our own contemporary relationship with technology with fresh eyes. In this edition, Turkle frames her classic work with a new introduction, a new epilogue, and extensive notes added to the original text.

Language and Problems of Knowledge: The Managua Lectures by Noam Chomsky (1987)

Language and Problems of Knowledge is Noam Chomsky’s most accessible statement on the nature, origins, and current concerns of the field of linguistics. He frames the lectures with four fundamental questions: What do we know when we are able to speak and understand a language? How is this knowledge acquired? How do we use this knowledge? What are the physical mechanisms involved in the representation, acquisition, and use of this knowledge? Starting from basic concepts, Chomsky—known as the father of modern linguistics—sketches answers to these questions and offers prospects for further research.

The Originality of the Avant-Garde and Other Modernist Myths by Rosalind E. Krauss (1985)

In this challenging collection of fifteen essays, most of which originally appeared in October magazine, Rosalind Krauss explores the ways in which the break in style that produced postmodernism forced a change in our various understandings of twentieth-century art, beginning with the almost mythic idea of the avant-garde. Krauss—co-founder of October and famed American art critic—uses the analytical tools of semiology, structuralism, and poststructuralism to reveal new meanings in the visual arts and to critique the way other prominent practitioners of art and literary history write about art.

“All of her observations are unfailingly original and provocative.” —Art Documentation

Matter and Consciousness, Third Edition: A Contemporary Introduction to the Philosophy of Mind by Paul M. Churchland (Originally published in 1984)

In Matter and Consciousness, Paul Churchland—a distinguished theorist and commentator in the field of philosophy—presents a concise and contemporary overview of the philosophical issues surrounding the mind and explains the main theories and philosophical positions that have been proposed to solve them. Making the case for the relevance of theoretical and experimental results in neuroscience, cognitive science, and artificial intelligence for the philosophy of mind, Churchland reviews current developments in the cognitive sciences and offers a clear and accessible account of the connections to philosophy of mind. For this third edition published in 2013, the text was updated and revised throughout. The changes range from references to the iPhone’s “Siri” to expanded discussions of the work of such contemporary philosophers as David Chalmers, John Searle, and Thomas Nagel.

“To read this book with attention is not just to find out about philosophy, but to do it. Churchland has written the best introduction available, for students and for general readers.” —Margaret Boden, Times Higher Education Supplement

Out of the Crisis, Reissue by W. Edwards Deming (Originally published in 1982)

In his classic Out of the Crisis, originally published in 1982, international management consultant W. Edwards Deming describes the foundations for a completely new and transformational way to lead and manage people, processes, and resources. Deming offers a theory of management based on his famous 14 Points for Management. Management’s failure to plan for the future, he claims, brings about loss of market, which brings about loss of jobs. Management must be judged not only by the quarterly dividend, but by innovative plans to stay in business, protect investment, ensure future dividends, and provide more jobs through improved product and service. In simple, direct language, Deming explains the principles of management transformation and how to apply them—and research shows that Deming’s approach has high levels of success and sustainability. Translated into twelve languages and continuously in print since its original publication, Out of the Crisis has proven highly influential.

“Deming’s profound insights stand the test of time. Every leader who cares about improving quality in the deepest sense of the word—that of making people’s lives better—should be well-read in Deming’s philosophy and methods.” —Jim Collins, author of Good to Great, coauthor of Built to Last

Since the publication of its first edition in 1984 and its second edition in 1996, Structure and Interpretation of Computer Programs has influenced computer science curricula around the world. Widely adopted as a textbook, the book has its origins in a popular entry-level computer science course taught by Harold Abelson and Gerald Jay Sussman at MIT. The book introduces the reader to central ideas of computation by establishing a series of mental models for computation. This new edition, published in 2022, has been adapted using JavaScript for programming examples.

“When I am asked ‘How can I become a better programmer?,’ I recommend this book.” —Douglas Crockford, author of How JavaScript Works

The Architecture of the City by Aldo Rossi (1982)

Aldo Rossi was a practicing architect and leader of the Italian architectural movement La Tendenza and one of the most influential theorists of the twentieth century. The Architecture of the City, first published in Italian in the 1960s, is his major work of architectural and urban theory. In part a protest against functionalism and the Modern Movement, in part an attempt to restore the craft of architecture to its position as the only valid object of architectural study, and in part an analysis of the rules and forms of the city’s construction, the book has become immensely popular among architects and design students. This edition, published in 1982, first brought his ideas to an American audience.

“Rossi reminds us that individual reputations and accomplishments are less important than our cities themselves.” —Mary McLeod, Design Book Review

The Structural Transformation of the Public Sphere: An Inquiry into a Category of Bourgeois Society by Jürgen Habermas

This is Jürgen Habermas’s most concrete historical-sociological book and one of the key contributions to political thought in the postwar period. Published in 1989, this book has been a revelation to those who have known Habermas only through his theoretical writing. Habermas, a German philosopher and sociologist, presents a lucid study of the origins, nature, and evolution of public opinion in democratic societies.

These imaginative thought experiments are the inventions of one of the world’s eminent brain researchers. They are “vehicles,” a series of hypothetical, self-operating machines that exhibit increasingly intricate if not always successful or civilized “behavior.” Each of the vehicles in the series incorporates the essential features of all the earlier models and along the way they come to embody aggression, love, logic, manifestations of foresight, concept formation, creative thinking, personality, and free will. In a section of extensive biological notes, Braitenberg locates many elements of his fantasy in current brain research.

The Modularity of Mind, published in 1983, synthesizes information from the various fields of cognitive science in support of a new and exciting theory of mind. Most psychologists study horizontal processes like memory and information flow; Fodor—an American philosopher—postulates a vertical and modular psychological organization underlying biologically coherent behaviors. This view of mental architecture is consistent with the historical tradition of faculty psychology while integrating a computational approach to mental processes.

“The issue Fodor writes about is central to the psychology of perception, cognition, and action. It is the central issue for anyone who would seriously study the neurobiology of behavior: Is the mind organized horizontally or vertically or both, and what are the consequences to psychology of proceeding on one assumption or the other?” —Alvin Liberman, former President of Haskins Laboratories