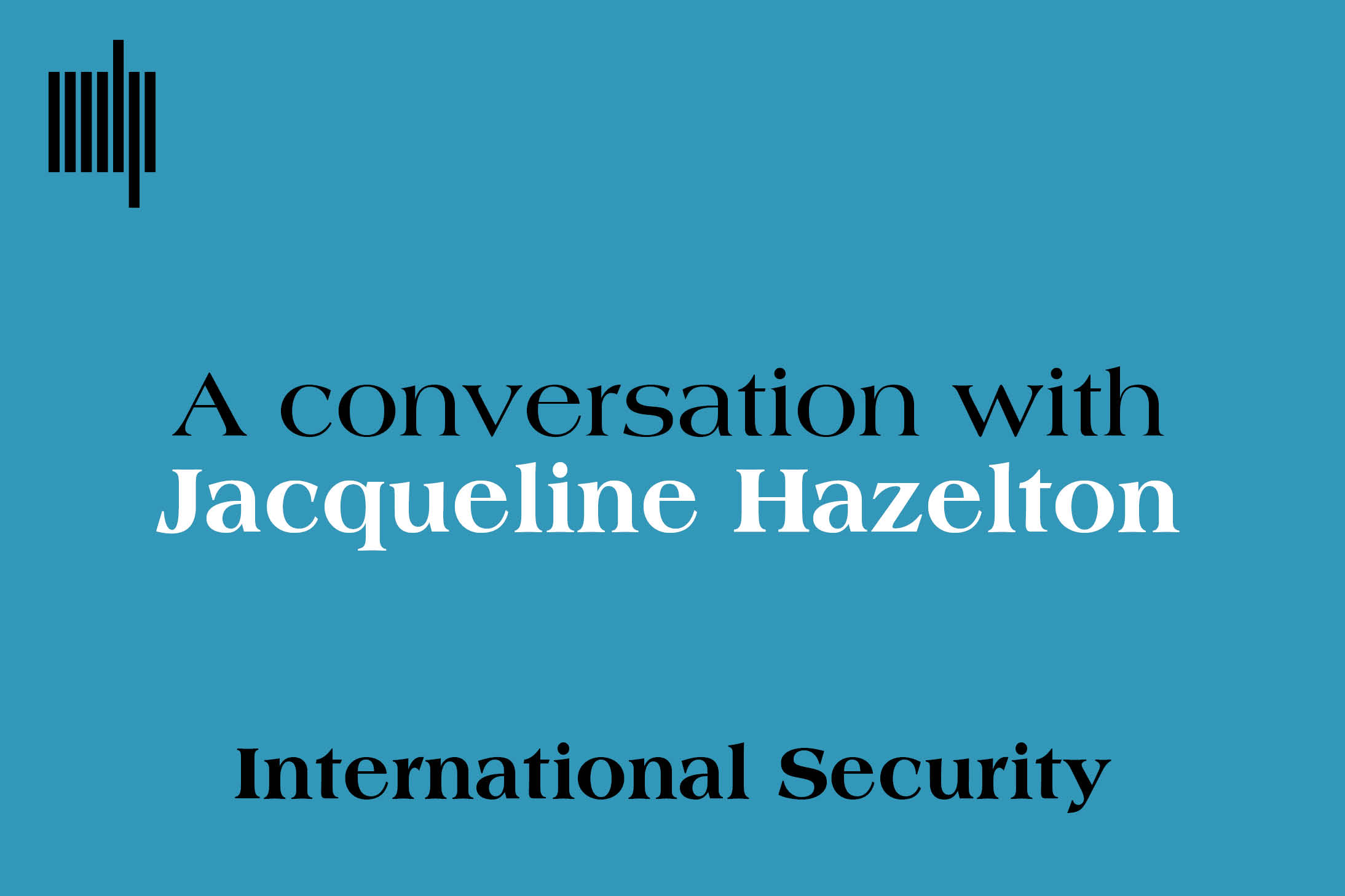 In Hazelton’s previous role at the War College, she taught strategy and policy to U.S. and international military officers. Her research ranged from strategy and U.S. foreign and military policy to counterinsurgency, terrorism, and the uses of military power. Her experience melds well with the editorial focus of the journal, which covers traditional topics of war and peace, as well as environmental, demographic, and humanitarian issues, transnational networks, and emerging technologies.

Read our conversation with Hazelton below, and learn more about International Security.

The MIT Press: What are you most excited about in your new role?

Jacqueline Hazelton: As the new executive editor of International Security, I am most excited about getting to read so much of the new work authors are doing in security studies. Submissions to International Security ask a variety of questions, use a variety of analytical prisms to frame them, and use a variety of methods to investigate them. This is as it should be. What these authors share is a core interest in the political uses of force in all its manifestations. From what I have seen so far, security studies is a vibrant, exciting area of study.

The MIT Press: International Security is rapidly approaching its 50th anniversary, and took the top spot in journals covering international relations in 2019. How do you continue to iterate on a publication with such a rich history and a storied present?

Jacqueline Hazelton: I think the secret to continuing to keep International Security at the top of the list of security studies journals is to keep an open mind about research. My predecessors considered the manuscripts submitted to them on the authors’ own terms. They did not try to fit research into a template. I intend to follow their precedent as the field grows and evolves.

The MIT Press: The journal prides itself on publishing scholarship that confronts the conventional wisdom of the field. In a similar vein, are there any new editorial challenges that you hope to take on with International Security in the coming months?

The MIT Press: You previously worked as an international journalist with the Associated Press. How does your background in journalism help as you approach this new position as executive editor?

Jacqueline Hazelton: My background in journalism and in English literature both help in my new role. My journalism background means I am used to deadlines, juggling different types of work all at once, and working with authors to heighten the quality and impact of their work.

Journalism and the study of literature also give me an awareness of the multiple narratives at play in the real world and the biases inherent in any attempt to capture them. Writing a news article requires deciding who and what is important and worth focusing on. Even more important is deciding what will not be included. Traditionally, journalists were white men and the voices they chose to highlight were those of white men. These traditions are changing, as they should be.

In literature, we still sometimes see bias against work that focuses on women and their roles in society, politics, and economics. Think of those who dismiss the work of the Brontës or Jane Austen because they do not recognize or they ignore the narratives these authors give us of the society, politics, and economics of their times. This work includes examination of both women and men and the dynamics of their interactions in each realm. More recent work, such as Jean Rhys’s Wide Sargasso Sea, extends this study of narratives. In Rhys’s case, she gives voice to the madwoman in the attic from Charlotte Brontë’s Jane Eyre; more contemporary work broadens our recognition of the number of narratives around us even further.

We are seeing a similar change in scholarship. Scholars are bringing attention to previously overlooked or ignored voices, narratives, and perspectives. This evolution is notable in security studies for the proliferation of more diverse research questions, subjects, analytical prisms, and methods. These changes are all to the good.

The MIT Press: What research areas within the field interest you most? Are there any particular trends of study that you are drawn to?

Jacqueline Hazelton: I study international relations, specializing in security studies. My interest is in outcomes of the use of organized violence to attain political objectives. More specifically, I currently focus on the dynamics of interactions between the stronger and the weaker. These relationships include stronger and weaker states, states and non-state actors, and non-state actors interacting with other non-state actors. Thucydides’ Melian Dialogue tells us that the strong do what they can while the weak do what they must. In fact, however, the weaker actor has greater agency than much earlier work has recognized. The weaker actor also has the power to shape the behavior of and stymie the goals of the stronger actor.

This dynamic is the focus of my recent book with the Cornell University Press’s Security Studies series, Bullets Not Ballots: Success in Counterinsurgency Warfare. My second book project analyzes the ways in which ideology shapes great powers’ military intervention into weak states.

This strategic dance of the weaker actor’s ability to dominate the strong is getting increasing attention in international relations and security studies. This is an example of the increasingly diverse questions being asked in our field.

The MIT Press: What’s next for International Security? How do you hope to shape the journal over the years to come?

Jacqueline Hazelton: My main goal is to keep International Security’s reputation and ranking at the top of the list. Doing so will entail change as the field changes. This is more of an organic change than a directed one. I will also uphold International Security’s reputation for publishing rigorous scholarship that challenges the conventional wisdom and considers the policy implications of the authors’ findings. There is great research out there and I am privileged to publish it.