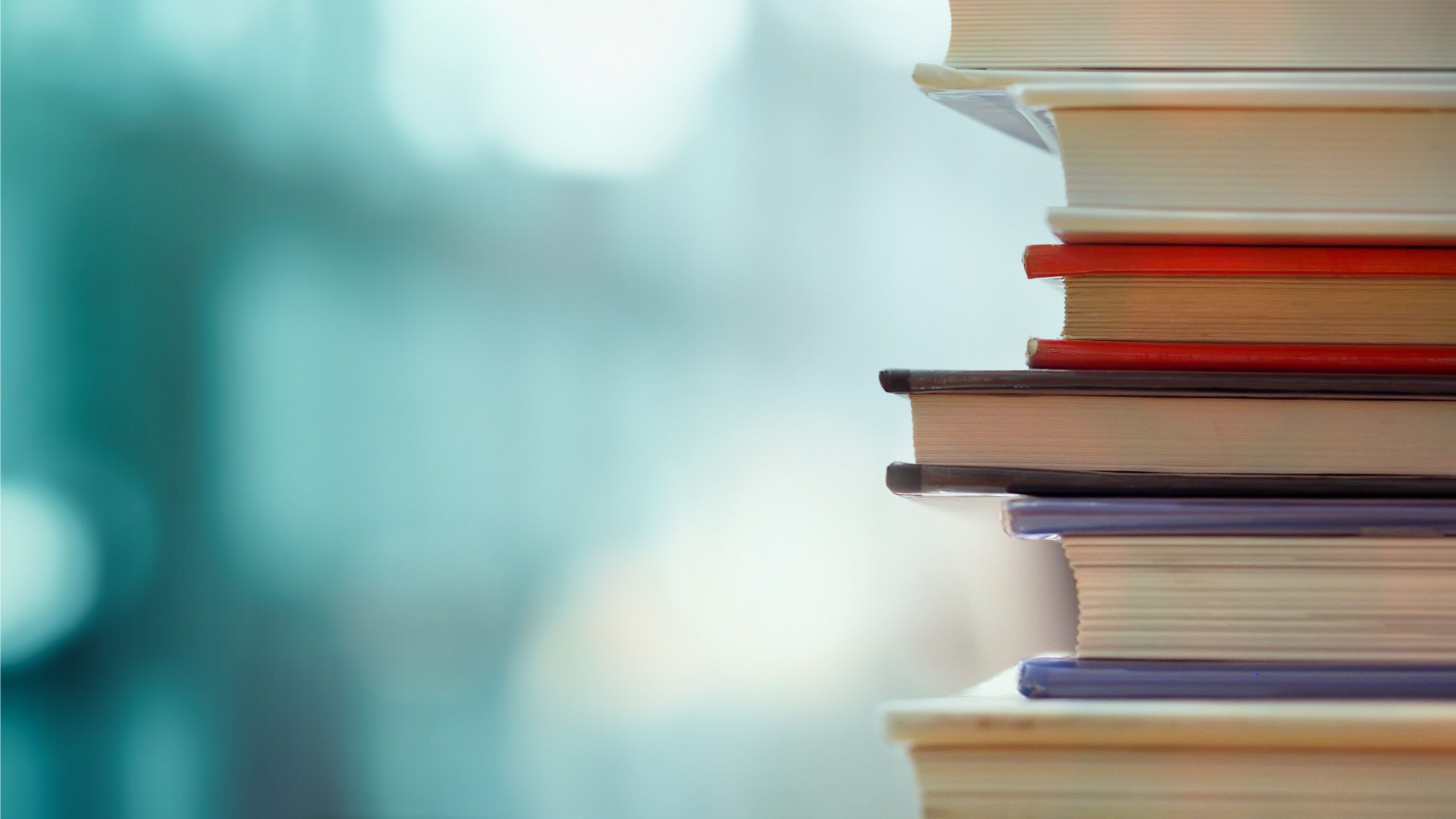 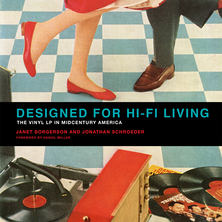 In this post Janet Borgerson and Jonathan Schroeder, authors of Designed for Hi-Fi Living, discuss their unique collection of albums and album artwork, the inspiration for their new book.

Designed for Hi-Fi Living began with the album covers. Hawaii was probably the first thematic category of used vinyl album covers that we purposefully gathered together. We’d noted on vintage covers the use of women’s bodies, languishing near-naked in a champagne glass or bursting out of a brilliant purple background with the heading, in voluptuous font: Organ Moods. When we found these covers of women in cocktail glasses, draped over Wurlitzer keyboards or posed next to waterfalls or behind palm fronds, we bought them. One day we put all of them out, on couches, windowsills, and tables, comparing them and starting to think about them in the same way we thought about advertisements or branding campaigns in our writing about marketing communication and branding. The covers were staged in a compelling way. Many had great colors, greens and 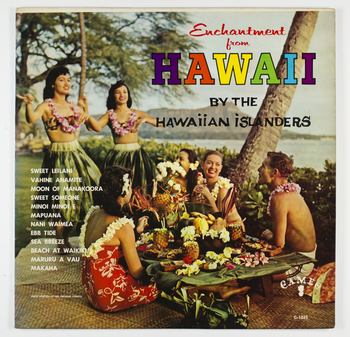 blues and reds, maybe an exotic vision of a beach and the ocean. Suddenly, we realized that almost all of these were Hawaii LPs, such as Lure of the Islands, or Lure of Paradise, or Enchantment from Hawaii. That intrigued us. We found that many were released in 1959, around the time Hawaii became the 50th US state. At some point, we found covers that featured white, “mainland” women “going native” especially on LPs like Your Hawaiian Honeymoon or Aloha Hawaii: blond-haired and blue-eyed they donned native cloth and flowers, showed off pale skin, and attempted come hither looks in what was supposed to convey, we guessed, honeymoon paradise. We were seeing not just gender, but the significance of skin as expression of race and place. We wanted as many examples as possible, an archive, that we could draw on for work on representations of race and gender and a colonialist gaze, because we were analyzing these aspects in our projects on advertisements and marketing communications. So, collecting began in earnest.

We started presenting on these observations at consumer research, critical marketing, and organization studies conferences because we were working in business school contexts. The first piece we published on representations of Hawaii was in a law journal following from a Native American law conference where we discussed our LPs’ representations of Hawaii and Hawaiians as analogous to controversies surrounding the use of Indian motifs in advertising, packaging, and for sports mascots. We realized that the Hawaii project had many dimensions, for example, as place and audio branding, as packaging a conceptual resource, including packaging a whole history and population, and as a case for critical race theory. When first looking at those Hawaii LP covers, and analyzing them over the years, we probably had some glimmer of insight into many of the issues we discuss in Designed for Hi-Fi Living. Our archive now includes well over 600 Hawaii albums. 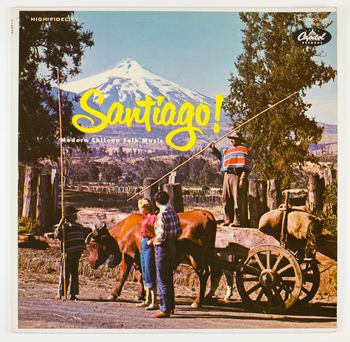 When we flipped through used record bins we were noticing colors and layout and font: that’s probably what we saw first, then figures, particular locations, themes, repeated patterns that denoted an individual LP being part of a series, such as Columbia Records “Adventures in Sound” or Capitol Records “Capitol of the World.” Also, there were all these waltz records that featured elegant clothing and formal interior design and chandeliers, and we thought, what’s going on here? The examples went beyond easy listening stalwarts like Lawrence Welk or Mantovani. And, we were finding covers with faded, but evocative, shots of Europe – a couple walking on the Champs-Élysées or views of multi-windowed villas along a Venetian canal, and these often overlapped with “honeymoon” or “holiday” records that we noticed had been cropping up in our collection, maybe originally picked out for other reasons, like how the woman was posed or color design. Off toward the right corner, many in this category had a “Recorded In” heading, so A Visit to Finland was “Recorded in Helsinki” and Santiago! was “Recorded in Chile.” Scouring such covers, on some of them we located next to the liner notes a little globe graphic encompassed by latitude and longitude lines with the words “Capitol of the World”, and we realized we had wandered into a series, and we started looking for all of those we could find. (There are more than 400 LPs released in the Capitol of the World series). We came across plenty of German Beer-Drinking Songs (a best-seller of the series), and discovered Hong Kong! and Japan: Its Sounds and People at Pet Sounds record store in Stockholm, Sweden, oddly enough, but China! and African Zulus!were more difficult to find. 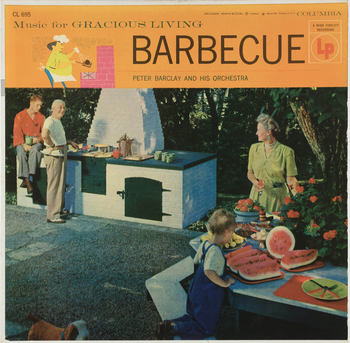 The brilliant orange and greens on Columbia’s Barbecue, from 1955, probably made that cover pop out to us. And then you see the woman in dress and pearls, the huge white barbecue grill, the boy in kimono, toy dog, and the table laid out with silverware, napkins and watermelon slices. It was so detailed, and odd. We realized that this album was part of a series called “Music for Gracious Living”; and so (before our more recent temptation to look for harder to find LPs on-line) we added another element to our mental list of desired covers and kept our eyes open every time we dug through old records. We found Buffet, another in the “Music for Gracious Living” series, next. The recipes on both of these were throw-backs to ham mousse and mayo-based salads. What could we do but begin to collect covers that included vintage recipes and forgotten foodways? And with Carlton Records Hear How to Have a Perfect Dinner Party,with its bantering husband and wife team offering advice on preparing four popular and distinct dinners for guests, including recipes and a cover photo displaying the well-set table, the pedagogical aspects of these albums really stood out from the stacks of Mario Lanza, Barbra Streisand, and Dean Martin records that fill the boxes at used record stores and charity shops.

Then, there were covers that highlighted objects we were interested in, like those that included a turntable, or vinyl records themselves, or Scandinavian design, such as famed Dane Georg Jensen’s hanging lights on Coffee Time. And the joy of finding a cover that featured modernist classics, like a Bertoia or Eames chair! What was it about these vinyl records that found connections to, or resonance with, modern design? Initially, we were just focused on the presence of the chair as a design object that we enjoyed looking at, but then we started to ask questions; and when we realized modern painting and sculpture also made an appearance, we wondered about this, too.

As our collection of vintage records grew, we started putting them in categories, which satisfied the curators in us. We considered gathering all our records with recipes together, or all those that focused on family groupings. In many cases, we let being part of a series decide placement, but not always. But there were some puzzles and frustrating overlaps: Should we shelve the albums geographically, putting all of the South African or all of the Spanish LPs together? Try to make proximity on the globe a secondary organizing element? How do you get from Tahiti to the Philippines in a linear way? Or, from Cuba to Africa? In these exercises in categorizing, we learned something about our own global preconceptions and the complexities of connecting and mapping certain music and peoples. 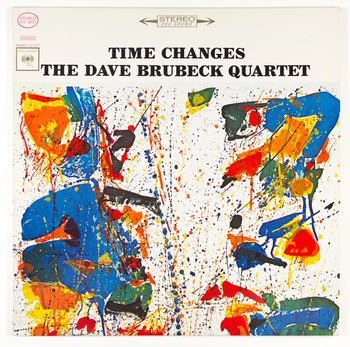 We had been collecting vinyl together for over twenty years, and in writing the book, we recognized that our collection had become an archive. We let the covers, including their artwork and photography, their liner notes and the musical and spoken word content, guide our themes, groupings, and, ultimately, the book chapters. As the chapters for Designed for Hi-Fi Living emerged, they took the form of stacks of albums leaning against our hallway wall. Some of the stacks had more obvious organizing distinctions: “Cuba”, “Space”, “Airlines”. But, others like “Being at Home” or “Modern Art and Design” seemed more amorphous, offering multiple possible combinations and divisions. There was this moment we realized that many of our LPs divided into representations or concerns of “home” and “away”. Records in the “away” grouping could’ve in part lead us to call this the “travel” section, but the albums were actually more general than travel, and “away” seemed a better companion to “home”. One series of records in particular, though, included both categories of home and away: We’d found almost the entire set of RCA Custom’s “Music for Hi-Fi Living,” in beautiful condition, at Car City Classics in Detroit and realized that an entire “modern” life cycle was represented from Volume 1 to Volume 12, from early dating to marriage, honeymoon, and beyond.

The “Music for Hi-Fi Living” LP series created an elaborate vision of how life should evolve, with the album names and covers beginning with the dating scenario of I Could’ve Danced All Night (Vol. 1) and moving to promote a visit to Hollywood (Vol. 3), Love on Broadway(Vol. 5), and a Latin Holiday (Vol. 6). Hi-Fi living had romance and domestic intimacy, but also this sense of being included in worlds of entertainment and talent, fame and wealth, and getting away from home. Taking a holiday or a honeymoon offered new landscapes and experiences. We realized that the custom of taking a honeymoon played a role in creating a more cosmopolitan, modern married couple, and of course supported the travel industry. And then the “honeymoon” LPs we already had in our collection became more interesting. Again, we’d often picked these out because their cover pictures, sometimes in faded greens and greys from the archives of some national tourist bureau, sometimes Kodachrome color popping with red, depicted a classic vision of London or Venice, Mexico City or Havana. We kept “Music for Hi-Fi Living” together in the book and placed it in Part One, the “Home” section, but as the bridge to Part Two, “Away”. A colleague to whom we described the manuscript early on thought we should aim for two books, along this dividing line. That might have allowed for more focus and we could have included more examples of each type. But we felt these two domains gained analytical strength when kept together, and this was especially true with the consumer culture and broader Cold War framing that we developed in the book. We have hundreds more records that could expand the already existing Designed for Hi-Fi Living’s chapters, not to mention possibilities of related further chapters.

For Designed for Hi-Fi Living, we started with, and tried to be guided by, the album covers, and not jump into topics that might’ve been related, or theoretically interesting, but that were not pointed to by the covers themselves. Of course, this is an interpretive point, and it could be argued we leaped to this or missed that. We didn’t want to provide a rote description for each album, or simply create a list of repeated concerns. Each LP cover and set of liner notes told stories and opened up a universe of details that led in possible directions. We tried to follow some of these as we explored aspects, like cover photo point of view or chair design or color patterns or implied meanings of certain locations or monuments. We were inspired by what we saw.