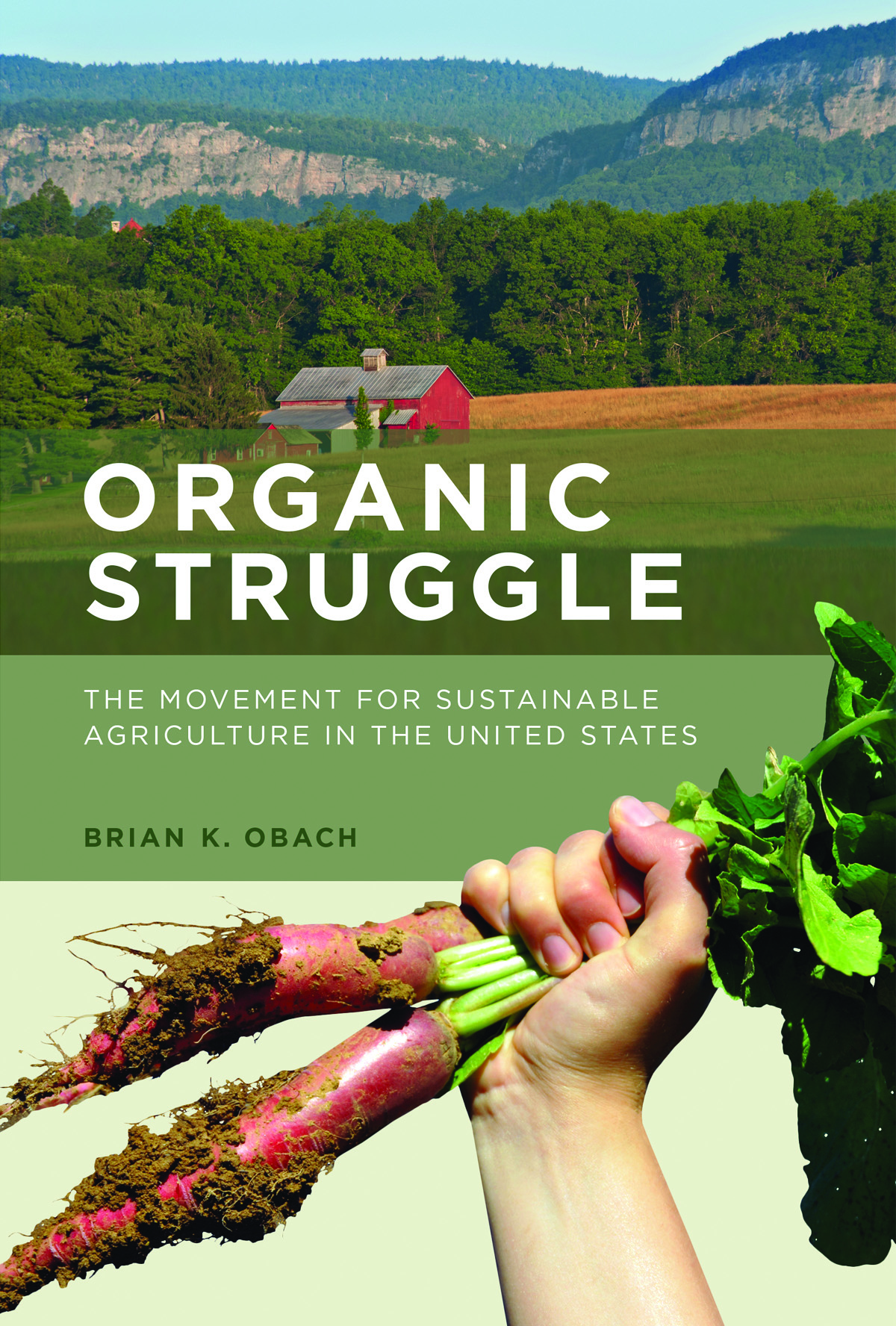 The latest from our Five Minutes with the author features Brian Obach’s Organic Struggle: The Movement for Sustainable Agriculture in the United States.

The title of your book is Organic Struggle. This refers to the endeavors of the movement that works for a sustainable agricultural system in the United States. But a few pages in it is clear that the word struggle might also refer to divergences and tensions within the movement. Would you expand on the internal struggles in the organic community between what you call “spreaders” and “tillers”?

Some organic proponents, those I refer to as “spreaders,” want to see the organic market expand as rapidly and as widely as possible.  Spreaders welcome the involvement of conventional agribusiness corporations in the organic sector, because only these big firms have the resources and organization to make organic foods accessible on a large scale in the short term.  The vast majority of consumers still shop at supermarkets and big box stores, which purchase their products from national distributors.  Spreaders applaud conventional food and agriculture corporations who have brought organic goods to the masses by making them more accessible and affordable.  Yet in doing so big agribusiness has distorted traditional conceptions of organic, much to the dismay of the “tillers” who envision a food and agriculture system composed on small organic farms primarily serving local consumers.  They view these big firms as having undermined organic integrity by superimposing conventional practices on an otherwise sustainable alternative.   All the while these agribusiness interests use their political muscle to further weaken organic rules, diminishing the health and environmental benefits in the name of efficiency and profitability.  Thus there is much internal struggle over strategy and ideology within the organic community.

What is Big Organic? Is it the epitome of success or failure for the organic movement?

Organic farming used to be primarily the realm of small farmers and processors distributing goods in local or regional markets through food coops, farmers markets, and natural food stores.  When the USDA’s National Organic Program (NOP) subsumed the patchwork of independent regional organic certifying organizations, conventional agribusiness firms saw an opportunity to enter the organic market.  While a few independent organic companies had grown fairly large even before the NOP went into effect, most of these were eventually bought up by agribusiness corporations, many of whom appended a small organic wing to their predominantly conventional operations.  These ‘Big Organic’ firms now control the lion’s share of the organic market.  Some view this as the ultimate failure of the organic movement given that the practices of these firms differ in many ways from the traditional vision of organic as small scale and locally oriented.  In contrast, others argue that mainstream acceptance represents a decisive victory for a movement that had been marginalized and ridiculed for decades.  They point out that these big firms still must adhere to organic rules, and the vast acreage they have brought under organic production represents significant ecological and health benefits relative to most conventional production.  In addition, Big Organic has not displaced the small farm model which has simultaneously seen growth in recent years.  The number of farmers markets and community supported agriculture programs has skyrocketed in the last decade.  The whole local food movement is largely an outgrowth of the organic cause. Thus, while agribusiness involvement has had mixed effects on organic proper, this development can still be seen as a step forward for a dynamic movement.

Coming out of the 1960’s and 1970’s counterculture, present-day organic agriculture is widely embraced by political power holders and multinational agribusiness corporations alike. Is it still relevant to talk about the organic movement as a social movement?

Scholars debate what specifically constitutes a social movement, but at least by some measures, those advocating for organic, or more generally for sustainable agriculture, do indeed represent a movement.  There are explicit social change goals that organic proponents are seeking to achieve regarding how our food and agriculture system operates.  The current structure of this segment of the economy, even with federal government support for organic and buy-in by big agribusiness firms, does not approach what sustainable agriculture advocates envision.  In an ongoing effort to fundamentally reform the food and agriculture system millions of people participate, at least minimally, through conscious purchasing decisions.  But beyond this individualistic political consumerism, which by itself may not constitute a movement, there are tens of thousands of people organized into hundreds of local, regional, and national organizations who regularly engage in collective efforts to shape policy and to pressure powerful decision makers.  Mass protest has not been common within the organic movement (although the anti-GMO cause has brought people to the streets), but pressure tactics such as boycotts, petitioning, and grassroots lobbying are common.  The book examines the many transformations of the organic movement, its successes and failures, and the evolution of its tactics, but even today, and perhaps more so today, it is worthy of being considered a movement.

You argue that “too many sustainable agriculture proponents still cling to the belief that consumers alone can transform society just by “voting with their dollars” (or their forks).” In your opinion, what should the organic movement do to achieve its transformative potential?

Market-based social change strategies underestimate the power of capital to undercut and coopt progressive alternatives.  The organic movement and all those involved with sustainable agriculture should be credited with demonstrating that there are viable alternatives to industrial agriculture.  By building alternative institutions they proved that another way is possible.  But this should not lead us to believe that this alternative will grow to overtake the conventional food and agriculture system.  Organic market share has grown, but it is still tiny relative to the overall food and beverage market.  A quarter century after the passage of the Organic Foods Production Act, and all the legitimacy and buy-in that the law conferred, organic still represents just 5% of the market.  Market-based social change advocates argue that we can change the world by “voting with our dollars.”  But the market is not a democracy and dollars are not distributed on a one dollar per person basis.  Those lacking resources are often excluded from participating in market-based activism and cannot benefit from superior commodities that are unaffordable or otherwise inaccessible.  But what’s more, this approach tends to foster niche markets that remain small indefinitely.  Thus, this approach can change the world, but only a small part of it.  Now that organic activists and farmers have demonstrated that there are better ways to do agriculture, we need to refocus on policy and politics and begin to institutionalize those practices for all producers.  We won’t convert to an all-organic system overnight, but we can pass laws and create policy that restrict the most harmful growing practices and favor those who do it right.  To achieve this we need to vote with our votes.  And we need to engage with the organizations, many of them rooted in the organic movement, that have turned their sites on Washington and the corporate dominated agricultural policy domain.  Only through political struggle can we hope to truly transform the industrial food and agriculture system.