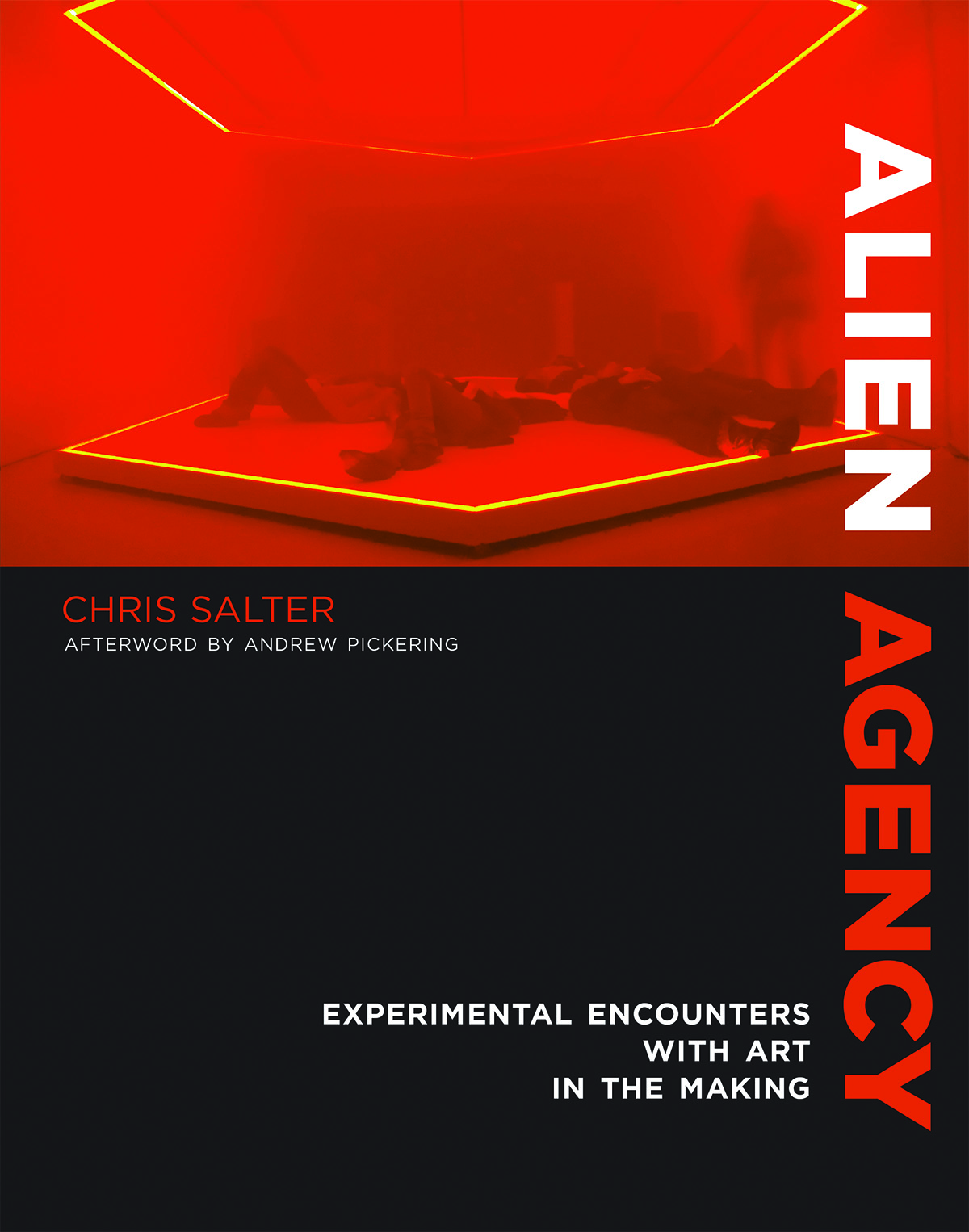 Below, Chris Salter discusses his book, Alien Agency for our “Five Minutes with the Author” series.

In your new book, Alien Agency, you follow three very different artworks in the making. What links them together is a common paradigm, a performative ontology, which endows the nonhuman or alien, with agency. What exactly is Alien Agency, and would you elaborate on the conceptual underpinnings of the three artworks?

The term alien agency actually comes from Bruno Latour who, in his book Reassembling the Social provokes the question of when we act, who (or what) else is acting and how do all of these actors (human or non) influence and shape each other. Of course, Latour is after interrogating the strange world of “the social” with this term—since he is continually after dethroning the old “modernist” constitution—the artificial dichotomies established between the natural and the cultural, the social and the technological. But I would like to take this notion of alien agency a step further. In modernism in terms of art and literature something that is alien is usually seen as estranging (the Russian formalists called this “ostranie”) or defamilarizing (as in what the theater director/playwright Bertolt Brecht called the V-Effekt (verfremdungseffekt in German or poorly translated as ‘alienation effect’). These were techniques that attempted to make things strange—to take something that was known and turn it into something unknown—so that we might take distance from it and (In Brecht’s case) take a position on it. But my idea of alien agency goes a step further than both Brecht and Latour—alien agency here signifies something that ultimately might be unknowable; a move away from that the idea that the artist/researcher is not only in complete control of his/her materials but that these materials and the manner in which they interact with the world can be known. Moreover, I’m interested in the how we not only cannot necessarily know these works in the epistemological sense of “stabilizing them” in order to measure and record their actions but also in that we cannot know the sensations and affects that will be produced in our interaction with them as well. In each of the three artworks described in the book, a different material (sound, cells, and other kinds of phenomena like what we call light, taste, smell) takes centre stage and I try to detail in a mixture of (auto)ethnographic-biographical-theoretical-historical accounts how different “researcher-creators” are entangled and struggle with these strange, unknowable, unstable materials and conditions that emerge in the process of making what we call artistic experience.

When nonhuman materials and by extension works of art are endowed with agency, they grow beyond the intent of the researcher-artist. They become unpredictable. How does this lack of control affect the role of the artist vis-à-vis the modern perception of the artist as a genius? Is there an example of this?

Yes, this “artist as genius” who is in control is another part of that modernist constitution that I’m after dethroning. This is not simply because there is this “new materialist” or post-humanist trend to focus on objects that escape or “elude” us—in fact, don’t human beings elude us just as much as objects—but because in my own practice (and other artists whom I know) we do struggle continually with this fine line between setting up situations where we don’t know, cannot know before hand what the interaction of different materials and conditions will yield (this is the sense of setting up the experimental situation as the historian of science Hans-Jörg Rheinberger described so that we can be surprised by something new that emerges in the world) and, at the same time, wanting to capture and repeat those new effects or actions for an audience. Once we turn the lens away from the idea that the artist “commands” his/her materials and start to accept a different model of how we make things—one which is more a “dance,” “entanglement,” “co-production” between us and the world outside of us, the stakes radically shift to a more open and surprising potential for encounters that can’t be premeditated or completely planned out.

Another thing that the three works of art, or aesthetic experiences, have in common is that they are all embroiled in and enabled by science and technology. Can you expand on the relationship between alien agency and human research and inventions?

The story of artists working with science and technology in the book has a powerful parallel to the narratives drawn by sociologists of science like Latour. Karin Knorr-Cetina and Andrew Pickering who, in studying the hidden and mysterious laboratories and instruments of science have long argued that knowing the world and manipulating it are intimately entangled within socio-material-technical conditions. These conditions are not separated from human researchers—in fact, without the humans there would be no science, no experimental setup, no instruments, no facts, no experiences. I certainly don’t pretend that artworks auto-construct themselves just as I don’t pretend that artistic processes and scientific research are the same or have similar goals – they don’t. But one of the things that the experiential and affective elements of artistic practice that operate with techno-science does is force us to ask a similar question that science does as well: how do new things come into the world and what do they do? That the works (or “encounter”) described in Alien Agency are enabled and, in fact, made possible through techno-science is really critical and perhaps sets the book off from other artist accounts and interrogations of their practices. While artists have use technical processes and practices for millennia, what differentiates the current moment and what I try and capture is a kind of profound instability in both method, practice and understanding that is emerging as we grapple with the consequences of what contemporary techne does.

“The nonmodern paradigm that starts to surface in this book is very broad. It begins to look like something one could live—a stance, a specific way of being and living in the world, one that recognizes the flow of becoming rather than dreaming of mastery,” says Andrew Pickering in the afterword.  What are the prospects of alien agency?

Recognizing that the world continually slips from our grasp and that the artistic encounter is ultimately about not only representing that experience but producing it anew every time.