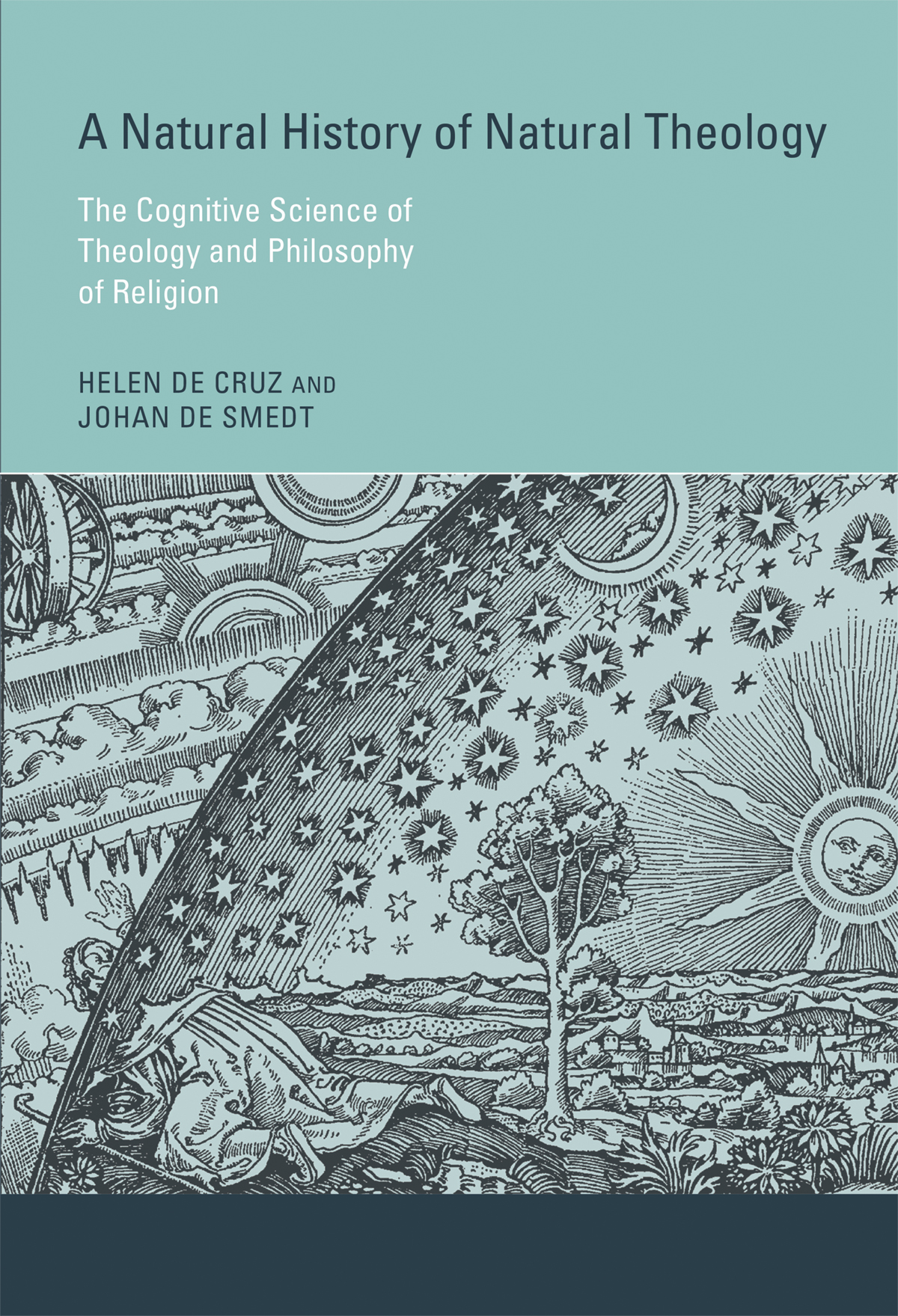 Today Helen De Cruz and Johan De Smedt answer questions about their new book, A Natural History of Natural Theology: The Cognitive Science of Theology and Philosophy of Religion, which examines the cognitive foundations of intuitions about the existence and attributes of God.

What do you mean when you refer to “natural theology”?

Take the cosmological argument: the universe exists; according to standard scientific cosmology, it began to exist less than 14 billion years ago. Since things that begin to exist do not create themselves, it follows that the universe too, had an external cause for its existence. As God is eternal, God is a plausible candidate for the origin of the universe. Therefore, the existence of the universe provides support for the claim that God exists. Other arguments propose that God is the best explanation for the appearance of complexity and design in nature (design argument), the existence of moral norms (moral argument), beauty (aesthetic argument), and miracles (argument from miracles). We discuss all these arguments in the book.

Although philosophers and theologians like Kant, Hume, and Barth, have repeatedly argued that it is impossible or futile to argue for God’s existence, such arguments have remained popular. We analyze why arguments in natural theology continue to generate so much discussion. We propose that this is no coincidence: the arguments for God’s existence resonate very strongly with intuitions that all humans hold, and that emerge already in infancy or early childhood. For instance, the idea that natural objects have purposes underlies the argument from design. One reason that this argument remains popular is that we are born with the tendency to think that there are purposes in nature.  Young children have a preference for explanations that invoke purposes (teleological explanations), e.g., they believe clouds are for raining and mountains are for climbing. Although adults normally don’t endorse such explanations, studies show that they have a tendency to endorse them when put under time pressure. Even professional physical scientists show increased acceptance of teleological explanations under these circumstances (e.g., trees produce oxygen so that animals can breathe).

Can you tell us what cognitive scientists have come to understand about the psychological bases of religious beliefs?

For many centuries, scholars have tried to find out why people believe in gods, ghosts, and other supernatural beings. Authors like William James (who wrote at the turn of the previous century) looked for special medical conditions, such as epilepsy, as the main psychological causes of religious beliefs. However, contemporary cognitive scientists (who study the human mind) have found out that religious beliefs are for the most part caused by ordinary belief-forming processes that all humans have. For instance, one reason why religious beliefs are so persistent is that they are counterintuitive—they violate our expectations of how things behave in normal life. Think of a man who changes water into wine (Jesus) or a newborn whose first footsteps sprout lotus flowers (Buddha). Studies indicate that people remember stories with such narrative elements better than stories with only normal components—this means that religious ideas are good candidates for cultural transmission: people remember them better, and will discuss them. In part, miracle stories are so arresting and memorable because of their counterintuitiveness. And indeed, when we see counterintuitive elements in other types of stories, such as fairy tales or cartoons where animals talk or change into humans, we also remember them better.

What do you conclude about the reasonableness of theists, and nontheists, in holding their beliefs in light of the results of cognitive science?

The reasonableness of theists and nontheists is perhaps the most difficult issue we deal with in the book. One easy solution is to conclude that theists aren’t reasonable in holding the beliefs they do in the light of cognitive science. For instance, a large empirical literature suggests that people spontaneously look for purposes and that they prefer explanations that invoke purposes. Young children especially show this tendency, and it reemerges in people who suffer from Alzheimer’s disease. One could argue that this doesn’t bode well for the design argument, which proposes that biological entities such as eyes and leaves, or indeed whole organisms, came about through God’s purposeful actions.

Alternatively, one can argue that atheists are not reasonable in denying those intuitions as they serve us well in everyday life. Normally, things that begin to exist do have an external cause. When those things are complex, the originators are usually agents. Babies already have this causal intuition, preferring agents as the cause of order. So one could argue that we should trust our ordinary reasoning also when it comes to metaphysical questions, such as the origin of the universe. However, it’s very hard to find out whether such intuitions are reliable in dealing with these questions; a lot depends on one’s worldview. In the book we argue that is reasonable for theists to trust their moral, teleological, and causal intuitions to infer the existence of God, and at the same time it is reasonable for nontheists to distrust these intuitions when thinking about metaphysical questions.

What are some of the myths about evolution and arguments against religious beliefs? How do you approach debunking them in this book?

We analyzed two myths about evolution and arguments against religious beliefs. The first myth is that an evolutionary explanation of religious beliefs straightforwardly debunks those beliefs. In several places in the book we argue that this is simply not the case, because the correctness of the intuitions that are invoked in natural theological arguments remains an open question (see above).