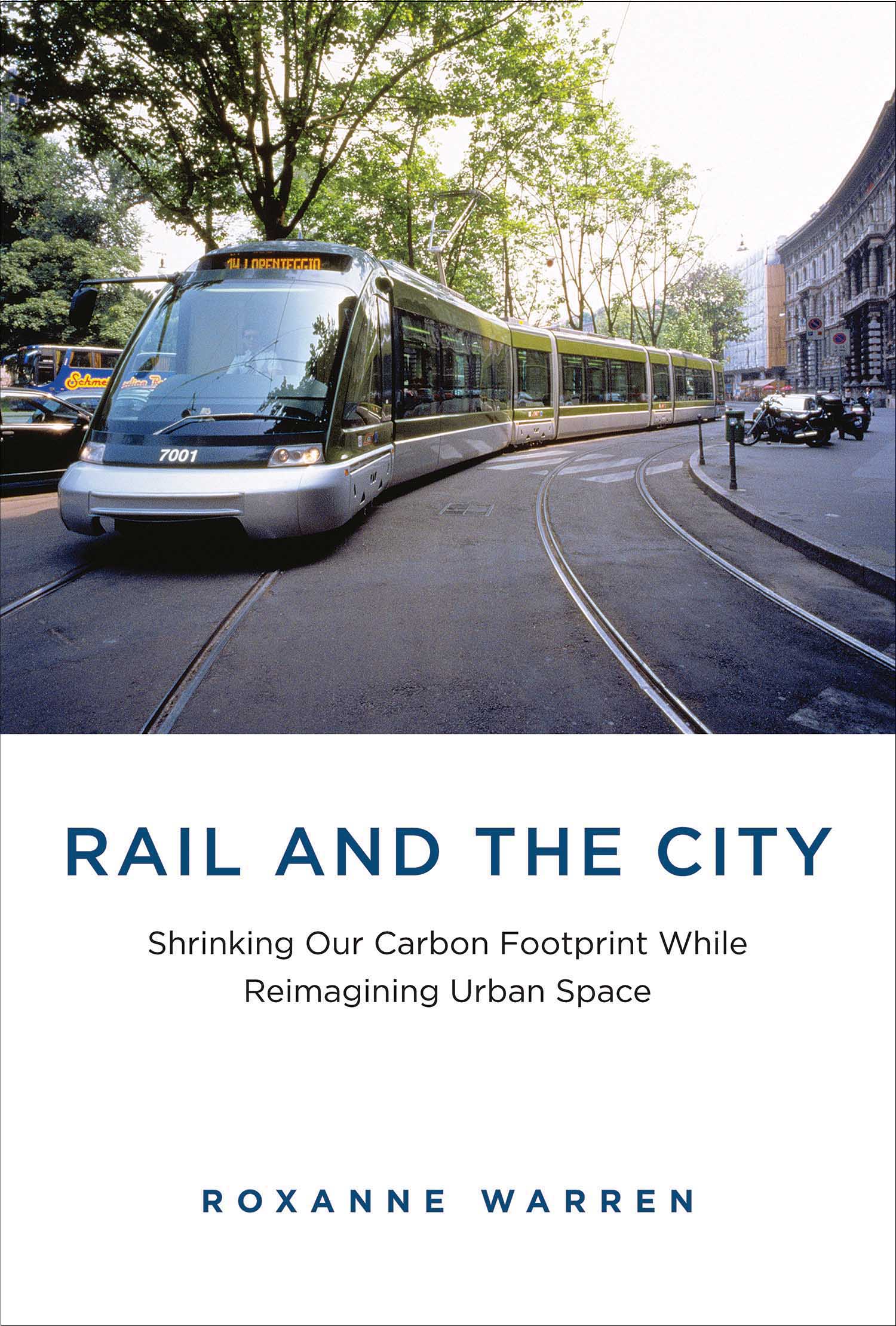 Today Roxanne Warren, architect and author of Rail and the City: Shrinking Our Carbon Footprint While Reimagining Urban Space, discusses her book, which makes a case for rail transit as the critical infrastructure for a fluidly functioning and environmentally sustainable urban society.

As an architect, how do you bring a unique perspective to issues such as urban sprawl, access to transit, and carbon emissions?

It is natural for an architect to be immersed in issues of transportation planning, since transportation is a central component of urban planning and design—urbanism—which is the embodiment of architecture at the maximum scale. At the same time, it is essential that urbanism be conceived with deference to the much larger-scale environment of the planet.

Climate change, which is poised to inundate our coastal cities worldwide with flooding, is integrally related to our dependency upon cars and the replication of the pattern of urban sprawl across the globe. This is a pattern that is commonly expected to continue into the future. According to the International Energy Agency, emissions from transportation are the fastest-growing source of global greenhouse gases, and are expected to increase 300 percent by the middle of this century. By then, 2 to 3 billion cars may be on the world’s roads, compared with 800 million cars today.

Cities are, and have been since antiquity, places of intellectual awareness and creativity. They are also the places where significant savings in land and fuel consumption can be realized—through more compact development, and through walking, cycling, and the use of public transportation. In light of our environmental challenges, these benefits cry out to be appreciated and supported with more enlightened, pro-city policies. The fact that, in the United States, the rural states, no matter how sparsely populated, are allotted two senators each, while the more urban, highly populated states are limited to the same number, makes it well-nigh impossible to advance an urban agenda—one that would adequately support, for example, educational and cultural institutions, sound urban infrastructure, and in particular, high-quality systems of public transportation. Perhaps a long-term solution to the problem might lie in the gradual conversion of our rural populations to appreciate these urban assets for their social benefits to humanity and their environmental benefits to the planet.

What are some of the drawbacks of continued dependence on automobiles in urban environments? Are any of these issues alleviated by advances in automobile technology, such as the electric car and emergence of car-sharing ventures such as Uber?

With more than half of humanity now living in cities—in the U.S., this is more than two-third of the population—the inherent conflict between the automobile and the city needs to be addressed. While the automobile has granted us unprecedented mobility, as its numbers multiply within a city, it creates immobility instead. This is essentially a product of the space that it consumes—both when it’s moving and when it’s parked, which is 95 percent of the time. Even if the challenge of finding carbon-free, affordable, and abundant fuel for our cars is resolved tomorrow, the spatial problem will remain as long as ubiquitous automobility remains. The prevalence of large cars and solo motoring compound the problem vastly. The electric car alone cannot solve the spatial problem. The emergence of car-sharing and smaller cars can help in a minor way, but nowhere near as effectively as the use of public transit, particularly rail transit.

What are the unique features of rail modes and how do they benefit the infrastructure of the city?

Rail’s wheel/rail assembly cleanly combines both support and guidance. Rail vehicles are guided by flanges and the conical form of the wheel surfaces. This unique external guidance design contributes to rail’s safety at a wide range of speeds, its compact and stable operations, its superior riding quality, its high passenger attraction, and its consequent stimulative effects on urban development. With rail, the driver’s only role is to control the speed. In comparison, highway vehicles, such as buses, are steered by the driver, and their stability depends upon adhesion with the highway.

What are some of the challenges to more extensive use of railways in the United States?

Since the advent and proliferation of the automobile in the 20th century, most urban development in the United States has been guided by land speculation and zoning laws in which car-driving and an agenda favoring suburbanization have played a central role. This has resulted in land use patterns that are highly dependent upon private motoring and rarely favorable to rail ridership. Specifically, sidewalks and bike paths for safe walking and cycling to transit need to be expanded. Many commuter rail systems that have been built since the mid-20th century are largely dependent for their patronage on car-park-and-ride lots. In fact, because of a lack of easy access by walking and cycling, the practical capacities of most of these costly rail systems are effectively limited by the sizes of their parking facilities.

Are there models to look to or lessons to learn from other countries?