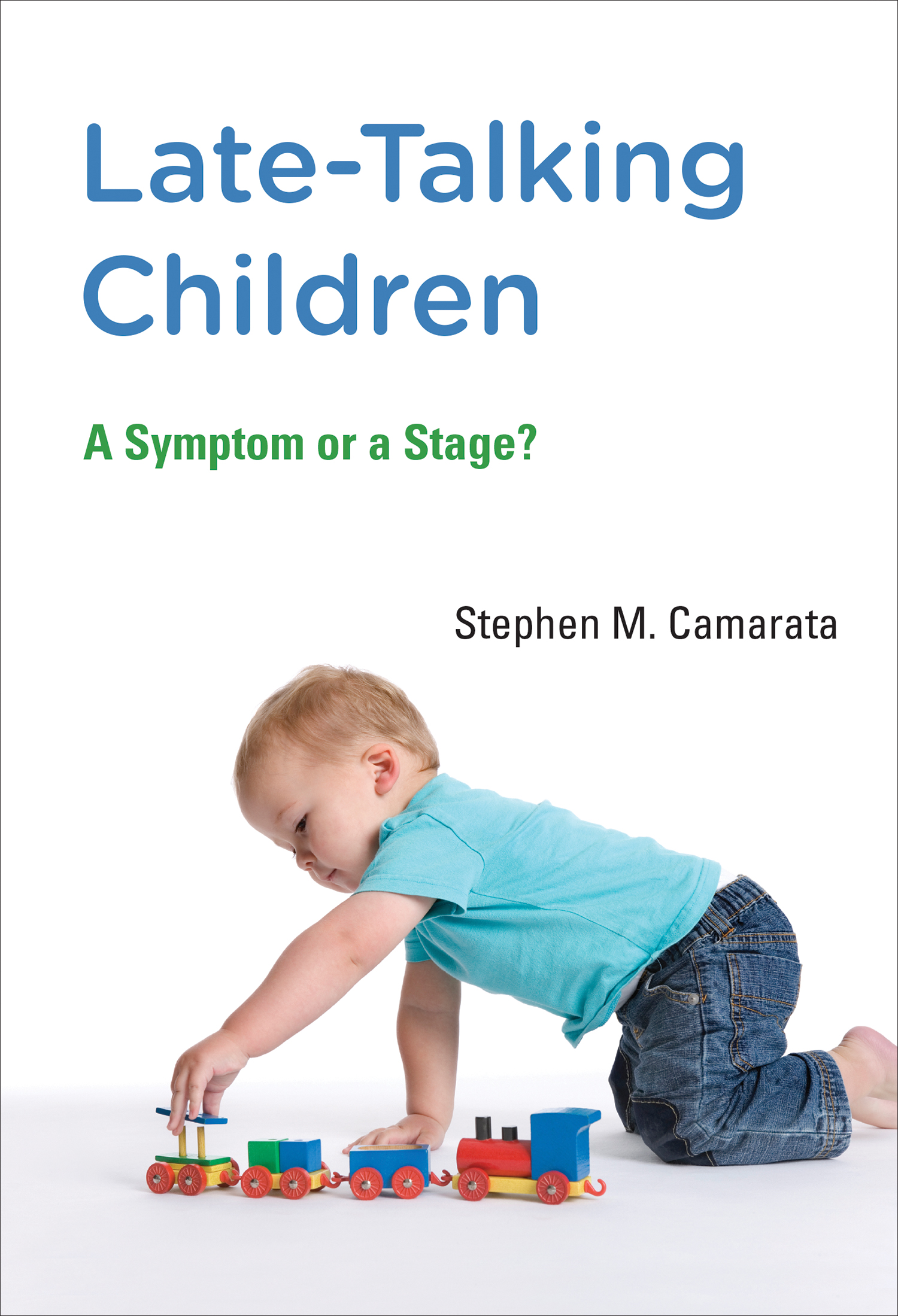 Today Stephen Camarata, author of Late-Talking Children, discusses some of the causes of late talking among toddlers and what the latest science tells us about the relationship between late talking and autism. Dr. Camarata is Professor in the Department of Hearing and Speech Science at Vanderbilt School of Medicine. He draws on more than twenty-five years of professional experience diagnosing and treating late talkers and on his own personal experience having a late-talking son.

What are some of the many reasons why a child may be late in beginning to talk?

In keeping with the title of the book, Late-Talking Children: A Symptom or a Stage?, talking late has quite a number of different explanations. For most toddlers, it is simply a developmental stage they are passing through without long-lasting adverse consequences. Indeed, after the child has “grown out of” the late talking, parents may not even remember much about the worry or anxiety they felt while their child wasn’t yet speaking. For other children, the late talking is a symptom of long-lasting or even life-long challenges. For example, children with hearing loss may talk late and will often lag behind peers academically as well in their communication skills. And of course, late talking is one of the primary symptoms of autism or autism spectrum disorder (ASD) and for intellectual disability (which was formally known as mental retardation).

Perhaps equally important, clinical science also tells us that talking late is not caused by poor parenting, vaccinations, “environmental toxins,” or a lack of nutrients such as essential fatty acids or vitamin B12. It is vitally important that parents understand that they did not cause the late talking in their child and that guilt is not only not warranted but also is counterproductive in helping their child learn to talk.

In Late-Talking Children, you detail some of the dangers of false diagnoses and of inaccurate labeling. What can parents do to guard against this?

The best protection against inaccurate labeling is to ask questions—and get answers. For example, when my son was labeled as having mental retardation (now called intellectual disability), I asked the psychologist why she believed that he would learn much more slowly than other children. It turned out that the test she was using was based upon his speaking and listening ability and not actually on his ability to think or to reason. So, the mislabeling of my son was directly due to misunderstanding the diagnostic process for late-talking children.

Many clinicians conduct what I call a “confirmatory” diagnosis. They start out looking for “signs” or “symptoms” of autism and simply confirm a preordained label without completing a differential diagnosis. That is, they start off with the idea that the late talking is a symptom of autism and confirm that hypothesis if any other signs or symptoms of autism are observed. But this happens even if these “red flag” behaviors are actually relatively common in typically developing children. For example, many two-year-olds throw tantrums, ignore their parents, are shy of strangers, are picky eaters, have large heads and/or toe walk.  No one would pay attention to these “signs” or “red flags” unless a child is also late talking. These traits are then used to justify the autism diagnosis. Evidently, some clinics and some clinicians label all, or nearly all late-talking children as being on the autism spectrum even though we know from population studies that only a small fraction of late-talking children actually have autism.

In order to guard against inaccurate labels, parents should ask the clinician how they arrived on a particular label. More importantly, they should also ask whether this label would be applied if the child were not late talking. Intellectual disability and ASD are both conditions that have severe symptoms above and beyond talking late so that no child should be diagnosed with either of these conditions solely on the basis of their verbal abilities.

I also wish to provide an important caveat. Some late-talking children do indeed have autism or intellectual disability and I have encountered parents who disagree with this label even when my testing shows that a child’s late talking is actually a symptom of one (or both) of these lifelong difficult conditions. These parents are understandably upset and may attempt to argue with the diagnosis. A clinician should always welcome questions and be prepared to explain how and why a label was generated. Even when parents disagree with my diagnosis, I would never berate them or accuse them of being in denial. After all, if the label is accurate, than the symptoms of autism and/or intellectual disability will persist far after the child has learned to talk and the parents will ultimately realize that the original diagnosis was correct. Also, neither I nor any other clinician is infallible so it is possible that the initial label will subsequently be proven incorrect.

Moreover, parents should trust their common sense and instincts and it is a clinician’s job to make sure  that they thoroughly explain a label, what it means and how they arrived at the diagnosis.

As you explain in the book, even though early diagnosis of late-talking children and early intervention are very important, there can be pitfalls of early diagnoses. Can you elaborate on what these pitfalls could be?

The primary pitfall is evident when the early intervention is based upon an inaccurate diagnosis. In medicine, this simple truth is well understood. It makes no sense to deliver a treatment unless an accurate diagnosis has been made. For example, being thirsty is a symptom of diabetes. But no doctor would treat thirst with insulin (which is often used to treat diabetes) unless a differential and positive diagnosis for diabetes was made. Of course, the thirst could also mean that a person was dehydrated or could arise from any number of conditions other than diabetes. And the thirst may not be a symptom of diabetes or any other medical condition. The treatment must be appropriate for the diagnosis!

Early intervention for autism usually includes techniques designed to increase a child’s motivation to communicate. But these techniques, which may include giving a child a food reward such as a piece of candy when they speak and teaching them to imitate everything an adult says is not a proper treatment for other forms of late talking and may actually derail normal language development. Early intervention is important, but it must be the right kind of early intervention and must be predicated upon an accurate diagnosis.

Also, we know that some forms of early intervention are worthless, no matter how early they are delivered. For example, there is a now discredited theory that autism is caused by vaccinations and there are treatments designed to “detox” the consequences of “vaccine injury.” Because we now know that this “vaccine” theory of autism is not only inaccurate, but actually based upon fraudulent science, this form of “early intervention” should be avoided.

What do we know—and don’t yet know—about the relationship between late talking and autism?

The overwhelming majority of children with autism or autism spectrum disorder are late talking. But, the overwhelming majority of children who talk late do not have autism. Simple epidemiology tells us this must be so. The incidence of late talking is about one in nine or 10 children in the general population whereas even the most generous estimate of autism indicates that only about one in 50 or 60 children have even one symptom of ASD. It is anyone’s guess whether this one in 50 or 60 includes late talking children who actually have been a misidentified as having an ASD. Regardless, taking these figures at face value indicates that less than 1 in 5 late talking children has autism or ASD.

An accurate diagnosis of autism includes not only late talking but also a reduced or absent motivation for social communication. Most talking children are socially motivated and do not display with this key feature of autism. However, because the child is not talking, a clinician must be attentive to nonverbal social engagement when completing a differential diagnosis. There are quite a number of excellent clinician-scientists studying the causes of autism, but currently a specific cause is not known. We do know that genetics play a role, and that the neurological development of people with autism is different in some ways than in other children. Moreover, it is very important that parents and clinicians understand that late talking does not necessarily mean the child has autism or autism spectrum disorders. It is also important that when a late talking child does indeed have autism, that the family get the proper help and begin treatment as soon as possible.

What can you tell us about the special category of late-talking children, who are said to have the “Einstein syndrome”?

It is clear that some very bright people, including Albert Einstein, talked late. To be sure, most late talking children do not have high intelligence. However, there are certainly many cases on record indicating that there may be trade-offs between early, precocious development of reasoning and analytical abilities and the development of verbal skills. I worry that these bright late-talking children will be misidentified as having autism or some other dire condition so that they never realize their intellectual potential due to misguided “treatments” that stifle creativity and innovative thinking. We all understand that some people with precocious verbal abilities may not be skilled in mathematics or engineering. The same is true for bright late-talking children: It is important to bear in mind that there is nothing wrong with people who are highly skilled in analytical abilities, even when they talk late and are less skilled with regard to language ability. I can’t help but wonder if Einstein, and other brilliant scientists who talked late would today be diagnosed as being “on the autism” spectrum or having intellectual disability. Many of these high achieving late-talkers were notoriously strong willed and noncompliant as children.

No parent should automatically assume that their late-talking child is a genius. On the other hand, signs of high intelligence and analytical ability should not be held against a late-talking child, nor should anyone attempt to derail the nurturing of their intellectual gifts.