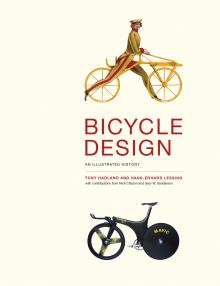 In honor of National Bike Month, Bicycle Design authors Tony Hadland and Hans-Erhard Lessing answer questions about their book and the history and future of this ever popular human-powered machine.

What was the inspiration for writing this comprehensive book on the bicycle’s technical and historical evolution?

Before starting the project, one of us made an abortive attempt to add authoritative information about the history of the bicycle to an article on Wikipedia. The text was immediately overwritten by a comment that “No single time or person can be identified with the invention of the bicycle.” This sentence had been lifted from an encyclopedia entry that typified much past writing on bicycle history—full of faked priorities, invented anecdotes, conjecture, and migrating errors.

Fortunately, that situation has been improving since the inception of the International Cycling-History Conferences (ICHC). We are fortunate that their founder, Nick Clayton, did valuable groundwork on the scope and coverage of our book. To a large extent, cycling history literature can be divided into what came before and after the ICHC era.

Pre-ICHC bicycle history books were often heroic attempts by individuals. Some writers based their work on collections of bicycles in certain museums. Some focused simply on an aspect of cycle history, such as racing or touring. Many focused solely on one particular country or glossed over 20th century developments. Post-ICHC books, on the other hand, have often been overburdened with facts and footnotes in an attempt to prove every sentence. The research then threatens to obscure the history. Moreover, we were fed up with cycle histories boasting ever more scurrilous caricatures of cyclists.

Our feeling was that a reliable and comprehensive history of technology concerning bicycles was now feasible for the first time. Our aim was to make it an easily accessible yet authoritative reference for all future books on the genre.

Can you explain a little about the images on the book’s jacket?

We put a lot of thought into creating a jacket design that would be visually arresting while hinting at the span of bicycle development. The starting point was relatively easy—the most aesthetically pleasing representation extant of an 1817 Draisine. To typify modernity, we chose the Lotus 108, as used by Chris Boardman to win the 4,000-meter sprint in the Barcelona Olympics.

The Lotus, based on a carbon fibre monocoque design by Mike Burrows, differs in many respects from the Draisine, yet the two images reveal aspects of design that both machines share. In particular, despite the Draisine being 175 years older than the Lotus, both machines have wheels of similar size arranged in line with front wheel steering. Thus we created a “compare and contrast” jacket design. We hope it will awaken people’s curiosity and entice them to open the book and discover more about the fascinating development of the “freedom machine.”

What are some of the most pivotal decades in the bicycle’s development and in what ways did these changes reflect the culture at large?

The first and most vital breakthrough was the invention in Germany in 1817 of the Draisine, with its two wheels in line and front wheel steering. The idea of a balanceable two-wheeler of this configuration was completely unprecedented and counter intuitive. It was stimulated by the “year without summer,” during which the majority of horses in the western world starved as a result of climate change wrought by the eruption of Mount Tambora. (At this time, the western world was heavily dependent on horses for transport and agriculture.) Though quickly and widely copied, the Draisine was suppressed by legislation in many places and the return of good harvests meant that a horse replacement was no longer an urgent necessity. So the idea of a balanceable two-wheeler went into abeyance for many decades.

The next crucial step came in the late 1860s in Paris. Cranked two-wheelers, pedaled by the rider rather than scooted like a Draisine, began to be produced in considerable numbers. There followed a period of rapid technical development, principally in France, the UK and the USA, during which the High Wheeler or “penny farthing” evolved from the French cranked bicycle and became for a while the dominant form. It was during this time that wheels with wire spokes in tension were perfected.

In England in the late 1880s, the safety bicycle, with a much lower riding position than the High Wheeler and chain drive to the rear wheel was created. It was soon equipped with another British invention, the pneumatic tyre, and rapidly became the world standard.

Those were the key stages in the basic development of the standard diamond-frame bicycle. But that was by no means the end of the story. What followed involved continual refinement of the bicycle and development of its components. Also, different interpretations of the bicycle evolved for specific purposes, such as racing, touring, commuting, load carrying, portability, and military use. And inventors could not resist the urge to try to improve on the diamond frame by alternative approaches. These included many recumbent designs. Other alternatives retained the traditional riding position but radically altered the architecture of the machine, as for example in the Pedersen and the Moulton.

Throughout these developments it is interesting to note the technology transfer to and from the bicycle industry. In the early 19th century, the makers of draisines and early cranked bicycles drew on the skill base and knowledge of carriage makers and blacksmiths. As the bicycle developed and became more sophisticated, cycle makers invoked techniques used by gunsmiths, scabbard makers, clockmakers, and textile machinists. In the late 19th and early 20th centuries, as cycle technology became cutting edge, early developers of automobiles and aircraft in turn drew on it. No other technology could match the bicycle’s for strength-to-weight ratio, and cycle manufacturers had also made great advances in multi-speed gearing, differential gears, and braking. It’s noteworthy that the Wright brothers were bicycle mechanics. The Wrights inspired the Caudron brothers in France to build aircraft and the Caudrons’ aerodynamicist subsequently created streamlined fairings for high speed bicycles.

In Bicycle Design, what myths do you aim to debunk about this human-powered vehicle?

There are quite a few but perhaps the highest profile one is that Leonardo invented the bicycle, a false claim that results from a modern Italian forgery. Then there is the 17th century stained glass window in Stoke Poges, England, which some have alleged shows a cherub on a bicycle: inspection of the actual window clearly reveals that it does not. The claimed invention of the bicycle by a Comte de Sivrac in France in 1791 is another fake. We have to confess that there was a time when we believed in the MacMillan velocipede of 1838—it was widely treated in the UK as an article of faith. But, as we show in the book, the evidence just doesn’t stack up. Many of these fake claims derive from late 19th century nationalism.

We also debunk some other oft-repeated myths, such as that Frank Bowden of Raleigh invented the Bowden cable, and that Messrs Sturmey and Archer together designed the first Sturmey-Archer gear or Ernst Sachs the Fichtel & Sachs coaster-brake hub.

What new features do you envision for the bicycle of the future? And how do you imagine its continued evolution?

That’s a tricky one but we think it’s important to understand that there will be no one single kind of bicycle in the future, just as there isn’t today. Many factors influence change, among them functionality, availability, price, and particularly fashion. It took a long time for mountain bikes to become the dominant form of bicycle in many western markets, despite the vast majority of purchasers never using them for their original purpose. The growth of the mountain bike in popularity was largely at the expense of road racing bikes. But in some countries racing bikes are back in fashion and selling at much higher price points than previously. In the UK, MAMILS (middle aged men in Lycra) with disposable income and nostalgia for their youth, are investing in carbon fibre bikes and boasting at the bar about how many thousands they paid for their latest machine. The same guys, just a few years ago, would have thought it madness to pay more than £250 for a bike. Various factors contribute to this shift—not least boredom with MTBs, the ready availability of carbon fiber racing bikes with lower priced entry level models, greater TV coverage of cycle sport, and the success of British riders in the Tour de France and Olympics.

Specific functionality is important and we can see in some markets how bicycle sales reflect functional needs. The Brompton folding bicycle has become almost an icon of London, like Big Ben and the double-decker bus. Its famously easy and reliable folding, combined with extremely compact folded size and reasonable ride characteristics, has made Brompton the biggest company still making bicycles in the UK. The bike works well in a city that has relatively poor provision for cycling, as it can be easily stored at the workplace and taken on public transport for part of the journey to and from work. Functionality also has a major impact in countries that, unlike the UK, provide a proper infrastructure for cycling—such as Denmark and the Netherlands. In such places, comfortable, well-equipped, low maintenance bicycles for daily travel in ordinary clothes sell well, often at surprisingly high prices. A sheltered bicycle equivalent to motor scooters like the Vespa is still lacking and a tricycle like Piaggio’s recent three-wheeled scooter would certainly be welcome by late-adopters yearning for stability.

Legislation held back the development of the bicycle in early times, as we show in the book, and the law still has a major impact on cycling, impacting on the kind and number of bikes sold. Thus, in the Netherlands, where the law favors cyclists at the expense of motorists, cyclists feel safer and more people ride sensible bikes to work and the shops. Whereas in the UK, where motorists are given derisory token sentences for killing cyclists, the courts take the view that anyone who rides a bike has it coming. Needless to say, this discourages use of bicycles for commuting and shopping, so cycling is relegated to a weekend leisure activity.

In developing economies it will be interesting to see, as people’s standard of living rises, whether cycling is largely abandoned as an indicator of poverty, or continues to be used for commuting and shopping, or becomes merely a leisure activity.

All of the above factors will influence what bicycles are made and how they develop. Meanwhile, the features and components will continue to develop and become more technically refined. The extent to which local markets accepts sophistication will be interesting. For example, it is noteworthy that in Japan, home of some of the most sophisticated bicycle componentry, a huge proportion of bicycles are single-speed. The Japanese commuter, riding to the railway station, has long been reluctant even to adopt the three-speed hub, despite Shimano creating a simple automatic version especially for their home market. There are signs in other parts of the world that cyclists are finally realizing that more gears does not necessarily mean better cycling. Gears are about matching the physique, endurance, and temperament of the rider to the terrain, distance and speed of the journey in the prevailing weather conditions. It’s the right gears and not necessarily the number of them that matters. Hence we see the rise of the single-speed fixed wheel movement, the current availability of three competing 8-speed hub gears and the trend towards single-chainwheel mountain bikes, with 10 or 11 speed derailleurs, instead of 27 or 30 speeds.