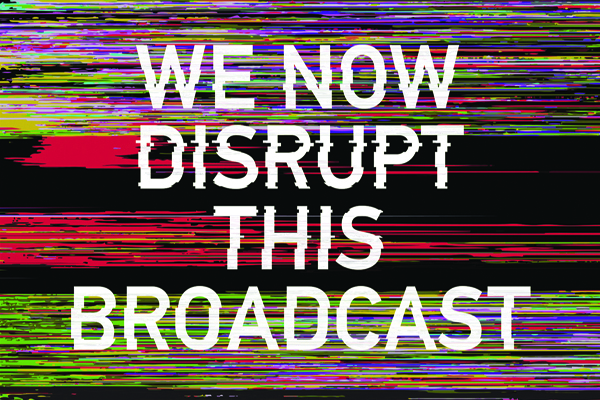 This is the story of how We Now Disrupt This Broadcast, Amanda Lotz’s book about the collision of new technologies, changing business strategies, and innovative storytelling that produced a new golden age of TV came to be!

For a long time, I wasn’t sure what to do about Netflix. Since the early 2000s, I had been exploring the implications of how changes in the business and technology used in the television industry were changing how and what we view. At that point, the conventional wisdom expected “the internet” to be a “new medium”—one routinely forecast as likely to “kill” television. But it seemed most of the video that people watched in the early days of video streaming (2005-2010) were clips from television series and music videos. As Netflix left its roots as a DVD-by-mail service to embrace streaming, television content began to outpace film in its library, and Netflix evolved from a niche to mainstream service. Based on what most people were watching via internet-distributed services in 2010, it was difficult to understand the internet as a new medium.

I continued to watch development and experiments in what I’ve come to call internet-distributed video until 2014. By then it had become clear that rather than an assassin, internet distribution brought radical adjustment—even revolution—to the television industry. I set out to follow my object of study—television—into the affordances of internet distribution, though I wasn’t sure what it would mean for my status as a television scholar.

I had in the back of my mind that the next project would be what I called “the cable book” (now known as We Now Disrupt This Broadcast). Cable—both as programming (channels) and distribution service (providers such as Comcast or AT&T) had changed profoundly in the early 2000s, but there weren’t good accounts of what had happened and why. I had watched nearly every scripted cable original series as they debuted in the late 1990s and early 2000s. Though particular series had captured the interest of television journalists (The Sopranos, The Wire, Mad Men), few had considered cable series as a phenomenon and the business behind this development. By 2014, it was also clear that cable service providers had quietly evolved into internet service providers. The whole OTT (over-the-top) panic that “everyone” was cutting cable was all over the trade press, but these discussions of “cable” dying rarely attended to the very different businesses “cable” includes. Cable, in fact, wasn’t dying. Cable channels had become more lucrative to the conglomerates that owned them than their broadcast holdings and cable service providers quietly morphed into the nation’s dominant internet service providers.

In the course of twenty years, two sizable adjustments in U.S. television distribution had occurred. I started with the basic question of “what happened to cable,” in both uses of the term, to its channels and distribution service. I didn’t plan to start with 1996—that only became the clear starting point once I created timelines of original series and saw when they started to gain attention. I then started looking for reasons for the change—after all, cable had been in more than 50 percent of US homes since the late 1980s—why the pivot to original scripted series in the late 1990s? Between the Telecom Act and DirecTV in 1996 and the subsequent push to rebuild analog cable, I had an answer.

The book became less about cable/internet service providers than I expected. Certainly, by the time I was writing all eyes were on Netflix. I was frustrated by the loose use of “digital” to refer to very different internet-distributed video companies—Netflix, YouTube, Amazon Video—and dove in to sort out how the changing ecosystem might be considered with greater nuance. By that point, “legacy” players—those who existed before internet distribution—came in from the sidelines with HBO Now, CBS All-Access, and soon after, SlingTV and others began offering internet-distributed packages of channels identified as “skinny bundles” or vMVPDs.

Writing about an industry in the midst of change brings new surprises by the day. The boundaries of something like “television” are culturally determined. In the early 2000s, television scholars debated whether a series was still television if it wasn’t viewed on a device called a television—a dilemma introduced by laptops, then mobile phones. When content became readily available on those devices later in the decade, this question that had so bedeviled scholars and technology pundits gave few viewers pause. If it was a show made to air on a television network, why would it be anything other than television? By the time Netflix made its first show and it had thirteen episodes, it too seemed best understood as television.

But television and the internet are now perhaps just starting the second stage of their relationship. Characteristics once perceived as obviously and indisputably necessary of television—a schedule, a season—now seem less so. Although many assume services such as Netflix are engaged in a death match with previous forms of television distribution, I argue the evidence suggests that many services are as complementary as competitive. Rather than believing one kind of television exists at the others’ expense, for the near term, we’re wiser to understand the boundaries of television’s competitive ecosystem to have expanded and grown more varied. Just as internet-distributed services such as Netflix drew many initial practices from the legacy industry, the legacy industry is now responding by incorporating lessons and practices pioneered by these newcomers.

Viewers are the beneficiaries of this increased competitive field and evolving industrial practices. At the core of my curiosity about television industries is a desire to understand how changes in industrial practices—the economics, technology, and regulation—change the types of shows likely to be made. My exploration of how and why the business of television shifted is driven by a need to understand why what I, and many others, watch on our screens changed so profoundly.

Of course the television business continues to evolve despite the need to finish the book on this two-decade chapter of its history. Though little has changed since 2016, we are now on the precipice of great change as a result of the elimination of net neutrality provisions and competitive field adjustments introduced by AT&T’s purchase of Time Warner and the sale of most 21st Century Fox assets. Many are forecasting considerable more M&A action in the coming year. We’ll see if that happens, and it will probably take a decade more to fully understand the implications of changes occurring in 2018. Whatever happens, We Now Disrupt This Broadcast: How Cable Transformed Television and the Internet Revolutionized It All sets the stage.