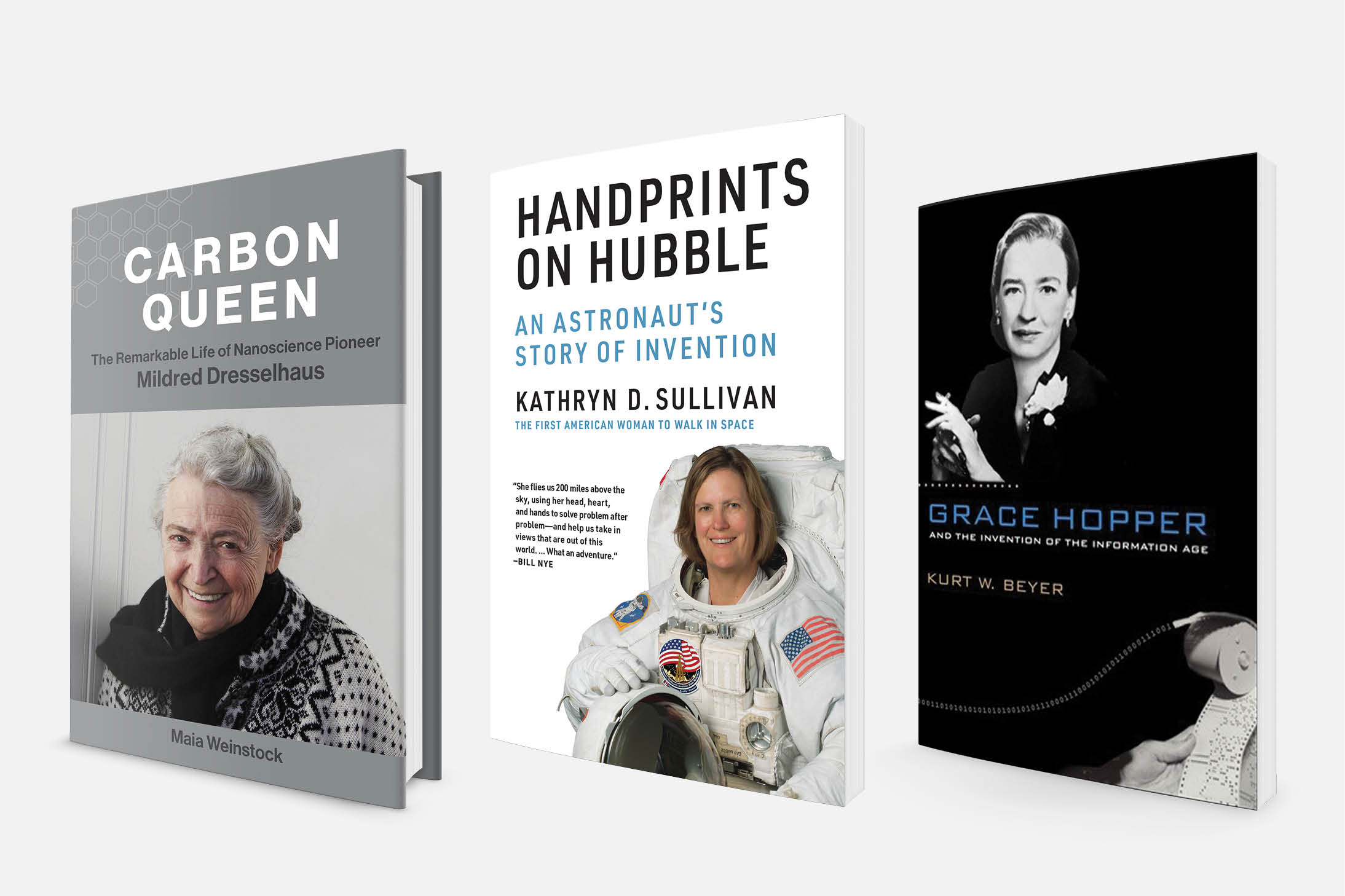 A selection of books on major female figures in STEAM

March 8 marks International Women’s Day, celebrating the social, economic, cultural, and political achievements of women. The MIT community at large has long highlighted the accomplishments of women—and their hard-fought efforts to achieve equity, at MIT and beyond, in often male-dominated fields. We’re honored to count many iconic women among our authors, and as the subjects of some of our most beloved books—including nanoscientist Mildred Dresselhaus, astronaut Kathy Sullivan, artist Marina Abramović, and more.

Explore the lives of these and other trailblazing women below, and learn more about the MIT Press’s Fund for Diverse Voices.

A Hollywood biopic about the life of computer pioneer Grace Murray Hopper (1906–1992) would go like this: a young professor abandons the ivy-covered walls of academia to serve her country in the Navy after Pearl Harbor and finds herself on the front lines of the computer revolution. She works hard to succeed in the all-male computer industry, is almost brought down by personal problems but survives them, and ends her career as a celebrated elder stateswoman of computing, a heroine to thousands, hailed as the inventor of computer programming. Throughout Hopper’s later years, the popular media told this simplified version of her life story. In Grace Hopper and the Invention of the Information Age, Kurt Beyer reveals a more authentic Hopper, a vibrant and complex woman whose career paralleled the meteoric trajectory of the postwar computer industry.

“Beyer’s meticulously researched biography shows how Hopper was one of the first to realize that software was the key to unlocking the power of the computer.” —The Guardian

“Myra Strober’s Sharing the Work is the memoir of a woman who has learned that ‘having it all’ is only possible by ‘sharing it all,’ from finding a partner who values your work as much as you do, to fighting for family-friendly policies… Both women and men will find a friend in these pages.” —Gloria Steinem

Neuroscientist Eve Marder has spent forty years studying thirty neurons on the stomach of a lobster. Her focus on this tiny network of cells has yielded valuable insights into the much more complex workings of the human brain; she has become a leading voice in neuroscience. In Lessons from the Lobster, Charlotte Nassim describes Marder’s work and its significance accessibly and engagingly, tracing the evolution of a supremely gifted scientist’s ideas.

When Marina Abramović Dies: A Biography by James Westcott

When Marina Abramović Dies examines the extraordinary life and death-defying work of one of the most pioneering artists of her generation—and one who is still at the forefront of contemporary art today. This intimate, critical biography chronicles Abramović’s formative and until now undocumented years in Yugoslavia, and tells the story of her partnership with the German artist Ulay—one of the twentieth century’s great examples of the fusion of artistic and private life.

Women of Science Tarot is a card game that helps us tell stories about our future based on principles of science. Each major arcana card features a fundamental scientific concept like extinction, diversity, or gravity. The 56 minor arcana cards feature inspirational women who have changed the course of STEM. The lively illustrations are by neuroscientist and comic artist Matteo Farinella. For readers new to tarot or those who want to learn more about women in STEM, accompanying the deck is a guidebook with biographies of all the women featured on the cards as well as information about the major arcana cards.