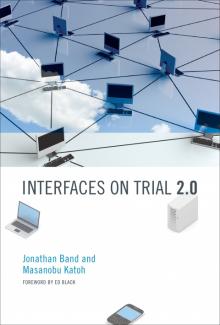 Today Jonathan Band, coauthor of Interfaces on Trial 2.0, guest blogs about the ongoing debate surrounding the 2013 Kirtsaeng decision and his testimony at two recent policy fora discussing the case. The following are his sentiments.

The Supreme Court’s decision last year in Kirtsaeng v. Wiley has been discussed in two policy fora this month, but any legislative action to overturn the international exhaustion rule it articulated is unlikely.

The Copyright Act provides that the first sale doctrine applies to “copies lawfully made” under title 17 of the Copyright Act. There was disagreement in the courts as to whether this phrase meant lawfully made in the United States, or lawfully made anywhere in the world. Publishers argued that the first sale doctrine applied only to copies manufactured in the United States. This would allow them to segment markets—to sell foreign made products at lower prices in foreign markets without worrying about them being imported into the United States and undercutting authorized sales here. Discount retailers, on the other hand, argued that the first sale doctrine should apply to all products made with the copyright owner’s authorization, regardless of the country of manufacture. This would allow the retailers to engage in arbitrage–to find products in low price foreign markets and sell them at higher prices here (but at prices still lower than those charged by authorized retailers). U.S. consumers would also benefit from the lower prices charged by these discount retailers.

In the Kirtsaeng case, a graduate student in the U.S. had family members in Thailand purchase legal copies of textbooks and ship them to him. He then sold the books on eBay. John A. Wiley & Sons sued for infringement of the distribution right, claiming that the first sale doctrine did not apply to its textbooks published in Asia. The lower courts agreed with Wiley. The Supreme Court, however, sided with Kirtsaeng. It interpreted the phrase lawfully made under this title to mean made in a manner consistent with U.S. copyright law, regardless of the country of manufacture.  The Supreme Court thus articulated an international exhaustion rule: the distribution right in a copy is exhausted after the first sale of that copy any where in the world, thereby allowing the importation of the copy into the United States without the copyright owner’s permission.

Since the decision, some publishers have argued that Congress should overturn the Kirtsaeng decision. They are not necessarily asking for the lower court’s rule that the first sale doctrine applies only to copies manufactured in the United States. Such as rule would encourage the movement of manufacturing overseas. Instead, the publishers are arguing that the first sale doctrine should apply only to copies sold in the United States, regardless of where the copies were manufactured. This would be a domestic exhaustion rule, which would allow the publishers to prevent importation of low priced copies purchased outside of the country.

The virtues of international and domestic exhaustion were recently discussed in two different settings. First, the House Judiciary Subcommittee on Courts, Intellectual Property, and the Internet held a hearing on the first sale doctrine in New York on June 1 as part of its ongoing review of the Copyright Act. Second, the Advisory Committee to the Congressional Internet Caucus sponsored a panel discussion on the first sale doctrine on Capitol Hill on June 13. I had the honor of participating in both fora.

Stephen Smith, the President and CEO of John Wiley & Sons, the plaintiff in the Kirtsaeng case, testified at the June 1 hearing that the decision is making it difficult for Wiley to sell text books in developing foreign markets for fear of arbitrage. Smith acknowledged, however, that in some markets Wiley is selling through trusted distributors that do not resell in the U.S., and that it has started differentiating products (e.g., creating international editions) to discourage importation.

In my testimony on behalf of the Owners’ Rights Initiative, I underscored these concessions Smith had made. I stressed that post-Kirtsaeng, publishers still could engage in price discrimination against U.S. consumers, they just couldn’t rely on the copyright laws to do so. I added that the Supreme Court made clear that nothing in the Constitution suggests that copyright’s exclusive rights should include the right to price discriminate. I also emphasized that overturning Kirtsaeng would not help U.S. workers. Because most copyrighted products are made overseas, increased foreign sales would not lead to more manufacturing jobs in the United States. I reminded the subcommittee that this issue was not limited to books; the previous Supreme Court cases in this area dealt with a logo on a watch (Costco v. Omega) and a label on a shampoo bottle (Quality King v. L’anza).

Greg Cram, the Associate Director for Copyright and Information Policy at N.Y. Public Library, explained the importance of the Kirtsaeng decision for libraries. Many of the books and other materials in the collections of libraries were printed overseas, and Kirtsaeng ensures that libraries will be able to circulate these materials without obtaining an additional license.

I regret not having more of an opportunity to respond to Smith’s criticism of arbitrage. It was as if he thought arbitrage was a dirty word. This was ironic given that the federal courthouse stands a few hundred yards from Wall Street, where thousands of traders engage in arbitrage every day. Arbitrage is a cornerstone of free trade and the free enterprise system (buy low, sell high).

Like the subcommittee hearing, the panel actually focused primarily on digital first sale, which is different from the international/domestic exhaustion debate. (Digital first sale deals with the permissibility of the sale of digital files, which typically involves the making of a reproduction of the files.) Kirtsaeng did, however, receive brief mention. In his introductory remarks, Keith Kupferschmidt, the General Counsel of the Software and Information Industry Association, provided a short background on the case. Then, in his closing remarks, he stated that while Congress should not address the issue of digital first sale, it should overturn Kirtsaeng’s international exhaustion rule. In my closing remarks, I simply responded that the Supreme Court in Kirtsaeng articulated the correct policy, and that Congress should not disturb it.