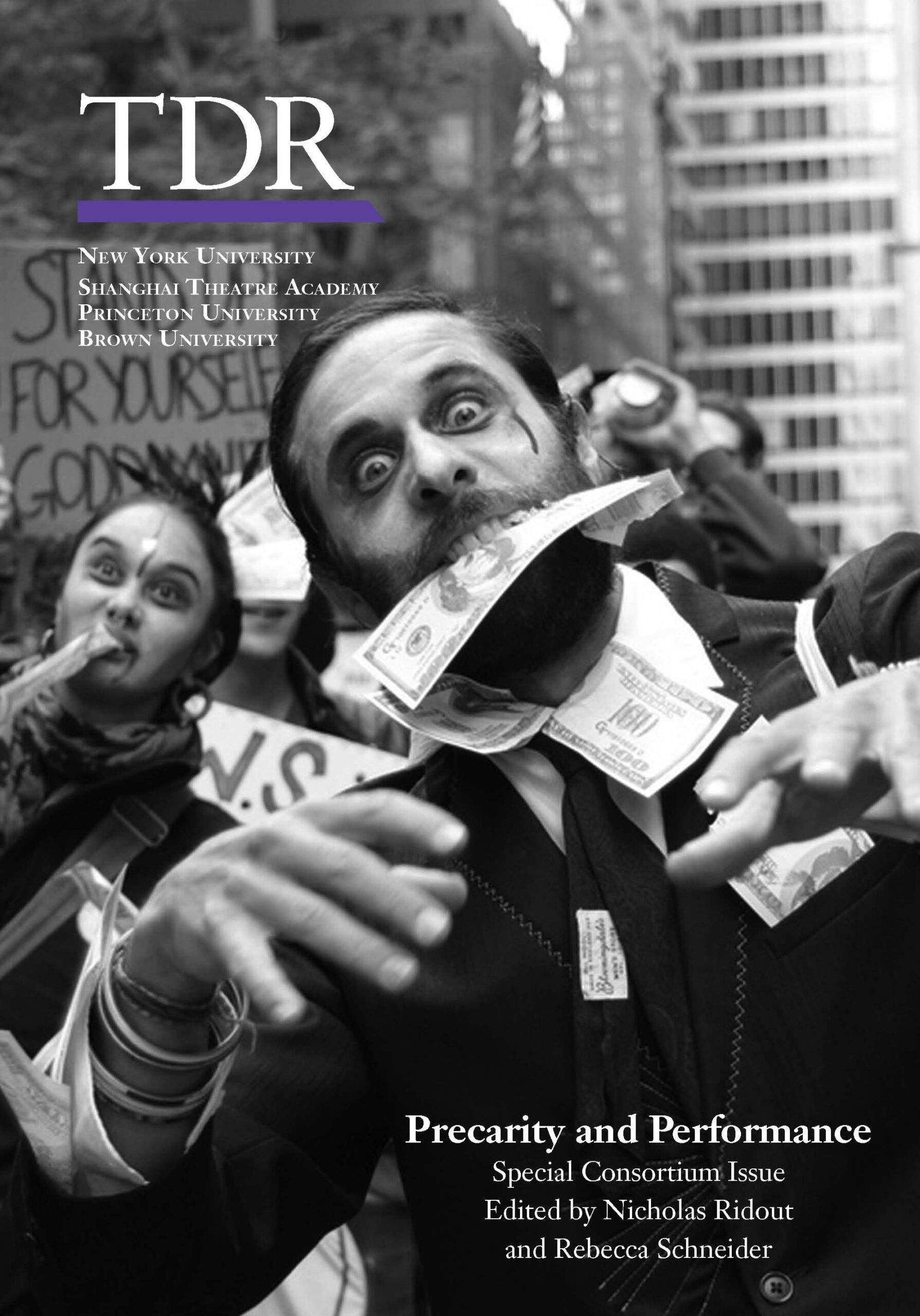 Occasionally, a handful of our journals will independently cover the same themes within their pages. It’s been over a year since Occupy Wall Street began, and several of our publications took the opportunity to reflect upon the influence (or lack thereof) of that movement. The editors of TDR, October, and The Baffler have curated 8 pieces on OWS, some of which are freely available to the public and all of which are included in issues available now. We’re also looking ahead to a new Boston Review book, Occupy the Future. This collection of essays, which will be out in February, addresses questions of democracy and equality, and can be pre-ordered now.

TDR Consortium Editor, Rebecca Schneider (Brown University) edited issue T216. When she began work on the issue, she sought out articles addressing wealth inequality, sustainability, and neoliberalism. Schneider soon learned that Women and Performance (Taylor & Francis) was also gathering manuscripts on those themes and so the two journals decided to create a jointly-produced issue. Two of the articles appearing in T216 address a specific mode of protest, the Occupy zombie marches. Schneider says, “it may be that the zombie marches came to the fore for TDR because they are moments of heightened theatricality in that movement, but our analyses of the zombie motif are also linked to questions of healthy life, ‘good death,’ biopower, and care of self that run throughout the issue.”

Since the 1970s, some artists have self-consciously inhabited their workaday jobs as art; this “occupational realism” invokes questions about the performance of labor and the value of art-making. What does it mean to be (emotionally, physically, mentally) “occupied” by one’s work? And what does it mean to “occupy” labor as a strategic artistic operation?

The Scene of Occupation – FREE

A year on, the Occupy movement is in shambles, according to skeptics. But was it ever anything but a shambles? A search for Occupy zombies in London and New York unearths the distinctive forms of dread and refuge on the scene of occupation. Can the zombies tell us how to disinter ourselves from the living graves of capitalism?

It Seems As If…I Am Dead: Zombie Capitalism and Theatrical Labor

Reading the zombie marches of the Occupy Wall Street movement beside a 2011 production of Ibsen’s play John Gabriel Borkman raises questions about theatrical labor in neoliberal capitalism. What happens when “dead labor” plays live onstage? Or when live protest actions are played across the living dead? Perhaps the answers can be found in considering economic precarity and precarity in/as performance together. 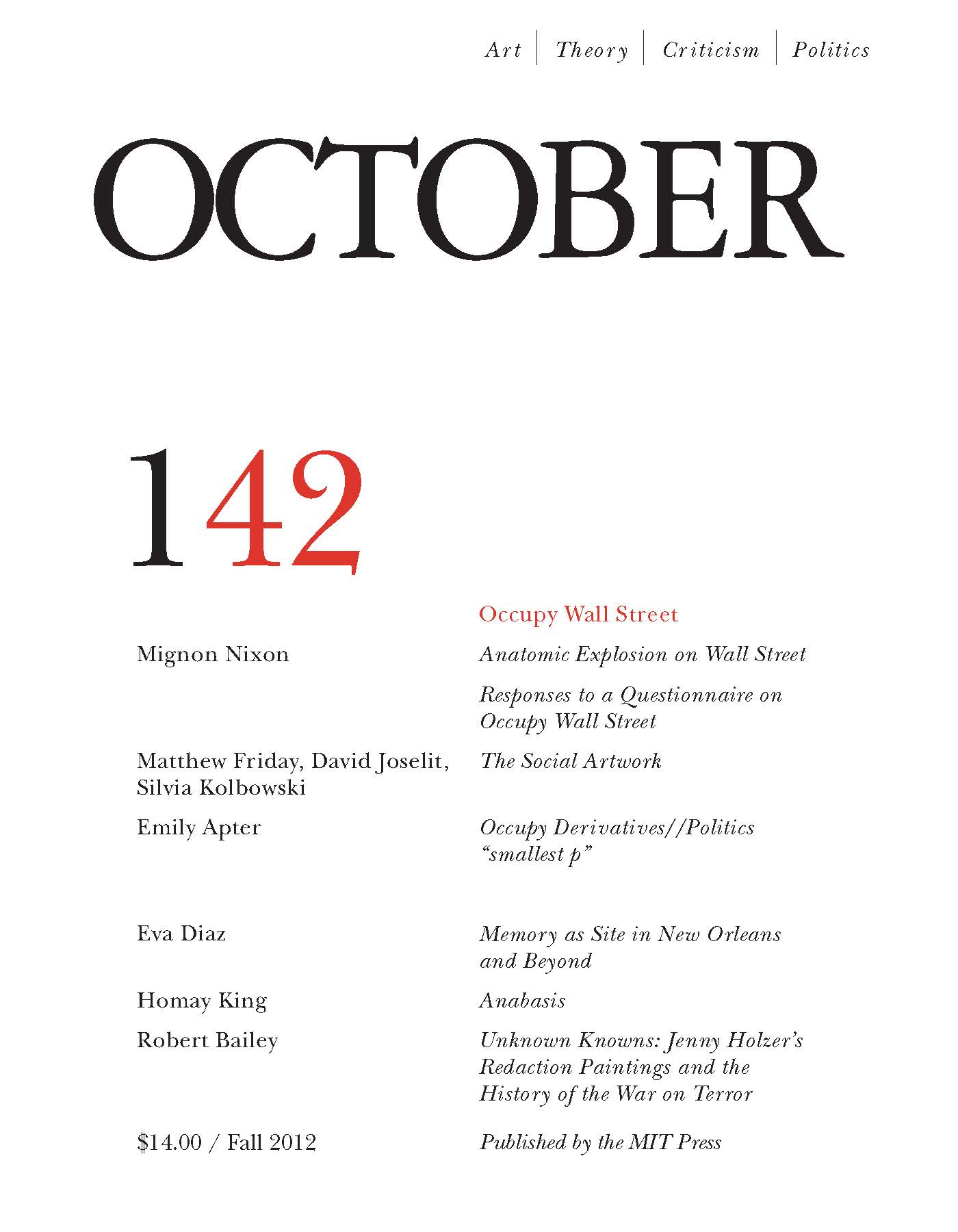 Carrie Lambert-Beatty, one of October’s editors, explains the process of creating this issue of the journal: “None of the editors are closely involved with OWS but some felt a great deal of solidarity with the movement, while also being fascinated by the ways its forms and practices related to the radical art, politics, and media that are important to us and our readers. We were goaded into doing something by Yates McKee, a frequent October contributor who has become very active in OWS, and through him and other friends and students we were able to reach out to people with a range of different perspectives on the movement. We left the question open and what happened was both unexpected and interesting. We are acutely aware that most aspects of October’s structure and role are in contradiction with the movement’s principles. We decided to embrace that tension.”

15 Responses to a Questionnaire on Occupy Wall Street – FREE

Various contributors including Thomas Beard, founder and director of Light Industry, a venue for film and electronic art in Brooklyn, New York; Julia Bryan-Wilson, an associate professor of art history at the University of California, Berkeley; and Coco Fusco, a New York–based artist and writer. 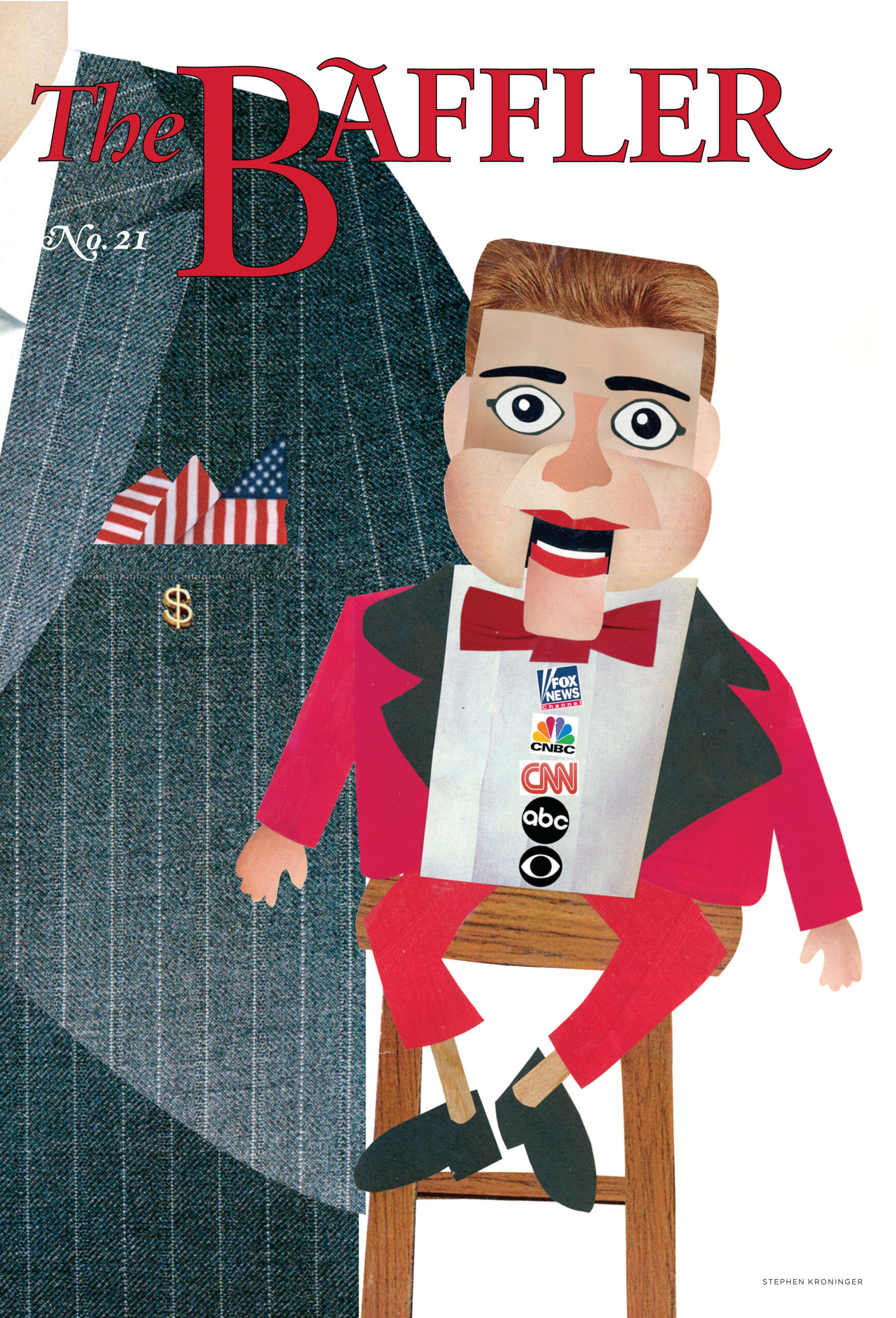 To the Precinct Station: How theory met practice…and drove it absolutely crazy – FREE

“Measured in terms of words published per political results, on the other hand, OWS may be the most over-described historical event of all time. Nearly every one of these books makes sweeping claims for the movement’s significance, its unprecedented and earth-shattering innovations. Just about everything it does is brilliantly, inventively, mind-blowingly people-empowering.”