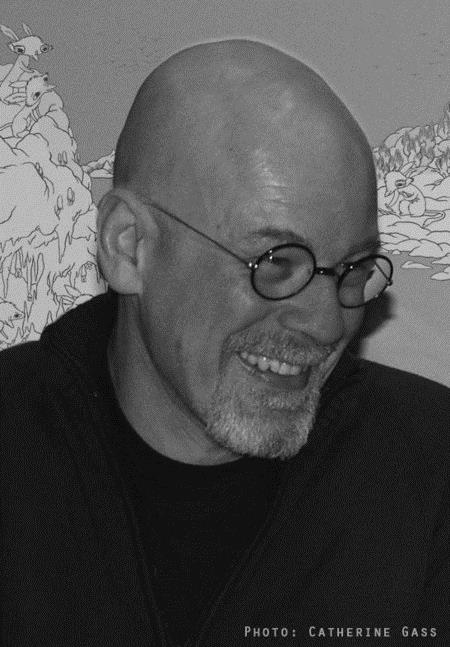 What does genetic art reveal about our everyday lives? We interview Steve Tomasula (University of Notre Dame) about green rabbits, genetic engineering, and the overlap between art and science in this month’s Spotlight on Science Q&A. Tomasula’s article, “Genetic Art and the Aesthetics of Biology,” appeared in the April 2002 issue of Leonardo. Read the article for free on our SOS page.

How did genetic art first catch your attention?

I was writing a novel dealing with bio-tech (VAS: An Opera in Flatland, The University of Chicago Press) and so spending a lot of time in labs that performed experimental surgeries, or were testing gene therapies, and I couldn’t help but notice artists working through similar issues. Instead of words, they were using the materials of the body as their medium: blood, flesh, genes…. I think it was one of those moments when people are drawn to thinking about, or working on, similar subjects for very different reasons, and a genre emerges—the way the invention of radio sped up communication, and helped create the multiple and simultaneous perspectives that Modernists were so interested in—only here it was this attention to the body, as compared to, for example, the psyche.

Alba, a green, glowing rabbit, was the first mammal genetically engineered to be a work of art. What is the significance of that project?

What really struck me about Alba was the controversy it caused. The techniques that Eduardo Kac used to create Alba were common in the lab at the time: it wasn’t unusual to create a mouse with a tumor, for example, that could fluoresce green. A tumor in a GFP mouse could be studied without killing the mouse and this was an obvious aid to research. But by taking this technique, and using it to create art—the green rabbit—Kac thrust it into public consciousness. Laypeople really don’t know what goes on in the avant-garde of the lab (and conversely, it seems like many specialists are tone deaf to the cultural ramifications of the work they do in their labs) but we could relate to a pet rabbit created to glow green and all the issues this action raises: the idea of designer animals, especially human animals; the ability to create a whole Noah’s Ark of artificial, or hybrid creatures; the ethics of doing so, or using any technology just because we can; or of manipulating what used to be thought of as the inherent integrity of any being. Especially for something as “unnecessary” as art. Or, and I think this is the real significance you refer to, calling out into the open how common, even mundane, genetic engineering was becoming, hidden in plain view as it was. Many people at the time didn’t realize they’d already been eating genetically engineered food, for example. Alba flagged the fact that genetic engineering was already here, and quickly becoming part of the fabric of our everyday lives. In fact, it’s important to remember that Alba itself wasn’t really Kac’s project. His real project was to create a genetically engineered pet and then bring it home to live a normal life with him and his family.

You write, “…[g]ene artists reanimate issues Duchamp would have appreciated, especially those of authorship and originality, and the nature and purpose of art.” What are the biggest issues the genetic art movement has raised?

Yes, originality, ownership, found objects, authorship—at a time when the courts rule that an individual, like John Moore, can have no property rights over tissues from his own body while an artist like Heather Dewey-Hagborg pushes issues of ownership with a project like Stranger Visions: she gathers DNA from cigarette butts (gum and other trash) that she finds in the street, and then uses it to generate 3D faces of the people who’d been smoking them. Then there are artists who appropriate functional objects as Duchamp did: things or procedures, materials that were created for some pragmatic reason—maybe a urinal, maybe a technique to splice genes. They make it useless to its intended purpose, as Duchamp did by “disconnecting pipes” and presenting it as art. By doing so, they transform it into metaphor. Or rhetoric. They allow it to speak in ways it never could when it was a cog in some larger machine. Specifically, genetic art seems to speak to the big questions art often addresses: Who am I? What am I? What is art? But it also opens a window onto the ethical issues underlying the controversies that arise because of its medium—transforming the body and its materials into art. In this way, bioart does seem to reanimate Duchamp, only with more at stake.

You include cosmetic surgery as an indicator that genetic art is not so far from everyday life. What are other examples of the way we use science in the name of aesthetics?

Probably every aesthetic creation has some scientific component, from the chemistry used to create teeth whiteners, to the materials available to an architect. So maybe it’s more revealing to think of their overlap in terms of the aesthetics of science? Or technology: the difference between a portrait rendered in watercolors or by a surveillance camera. That is, every work of art is a translation; every form of representation has an aesthetic, be it an equation, or an autopsy report. In science, the aesthetic is usually a byproduct of the tools used, until an artist or curator calls attention to it, and foregrounds it, often at the expense of content, or function—that is, asks us to look at it as art. Here I’m thinking of projects that transform technical, or scientific data or principles or practices into works of art: photosynthesis into music; or aerial photos of factory farms displayed as abstract paintings. But it’s even more evident when the aesthetic component of a science or technology is pushed to make a point, as Jason Salavon does, for example, averaging the pixels of portraits in his high-school yearbook to make a composite face; or the BLC collaborative, turning a white flower genetically engineered to be purple into a political football by “unengineering” it to be white again. Here we can see how technology and science are never neutral. There are aesthetic judgments, and power relations, embedded into the tools and techniques that color how we think of the subjects.

Oh, wow—that’s a tough one. Given how fundamental genomics is, in terms of both science and culture, it’s hard to believe genetic art won’t be part of the ongoing conversation. Think how technologies like the computer, or radio, have reconfigured the world, and how important it was for artists (or writers for that matter) to stay engaged with these technologies if they were to make art that was relevant to the contemporary moment. Since the same genetic letters make up every living thing—be it a tree, mouse, or human—it’s impossible to manipulate any gene without implications for all others; and so, inherent in the medium of genetic art itself are implications for evolution, including personal evolution, the politics of biodiversity; extinction—all profound questions with enormous stakes—especially given how we are moving into this era of desktop bomb-design, desktop genetic-engineering, that is, an era where there’s a real democratization of technologies whose complexities would have once limited their use to nations. The international moratorium on editing the human genome recently called for by the NAS and others is an indication of this, especially given the ease with which genes can now be edited using the new Crispr-Cas9 technique (just this past month, the FDA approved the first GMO animal for consumption; compare this to the Alba controversy). And of course artists have always hacked technologies designed for other purposes. That’s sort of how bioartists operate. It doesn’t take much effort to imagine some genetic artist creating an Orlan-like performance using his or her genome—either with the best intentions or not. Not all art is created equal. As I said in the article, there will be genetic art—consciousness-raising works like Alba—but also genetic kitsch, toys, products, and everything in between, maybe with tremendous consequences.

Read “Genetic Art and the Aesthetics of Biology” for free.