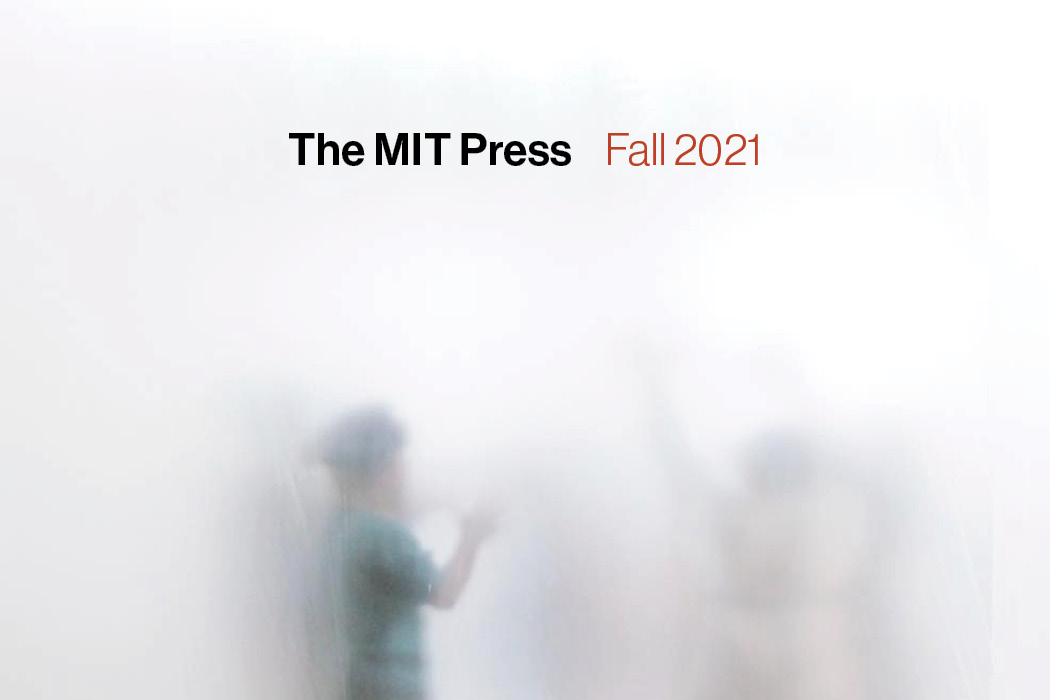 Looking ahead to the books we can’t wait to publish

The cover image for our Fall 2021 catalog—and the header image for this blog post—is of a performance piece titled “Sitting on a Man’s Head,” created by Nigerian-American artist, writer, and choreographer Okwui Okpokwasili, together with her partner, Peter Born. The piece, featured in one of our lead titles this season, A Black Gaze by Tina M. Campt, is described by the artists as “an unfolding score for a collective utterance, the ongoing making of an I, you, we, and us.”

As Campt explains, the work draws inspiration from a ritual once practiced by women in eastern Nigeria referred to as “sitting on a man,” a form of protest used by Igbo women to publicly shame men who have caused offense by gathering at the man’s home or workplace (often late at night) to dance and sing songs detailing their grievances with his behavior. The act, write the artists, was used by women as a critical tool to protect their economic and social interests.

The image, like the book from which it’s drawn, seems an apt entrée to our fall catalog. Several books this season imagine new possibilities of communal relations and ask readers to engage with their communities and take action. Lee McIntyre’s How to Talk to a Science Denier, for example, offers tools and techniques for communicating the truth and values of science, emphasizing that the most important way to reach science deniers is to talk to them calmly and respectfully—to put ourselves out there, and meet them face to face. And How We Give Now by Lucy Bernholz, a research scholar at Stanford University’s Center on Philanthropy and Civil Society, charts the everyday ways that we can give our money, our time, and even our data to help our communities and seek justice.

Featured below are a few additional highlights from the catalog, including a biography of the pixel (written by a cofounder of Pixar), an exploration of the arc of human reproduction through the lens of design, a graphic narrative on censorship of political cartoons around the world, and a forgotten gem by sci-fi master H.G. Wells, featuring an introduction by Bruce Sterling. We invite you to download the entire catalog and browse all our new books and journals, and we thank you, as ever, for supporting our books and our mission.

A Black Gaze by Tina M. Campt examines Black contemporary artists who are shifting the very nature of our interactions with the visual through their creation and curation of a distinctively Black gaze. Their work—from Deana Lawson’s disarmingly intimate portraits to Arthur Jafa’s videos of the everyday beauty and grit of the Black experience, from Khalil Joseph’s films and Dawoud Bey’s photographs to the embodied and multimedia artistic practice of Okwui Okpakwasili, Simone Leigh, and Luke Willis Thompson—requires viewers to do more than simply look; it solicits visceral responses to the visualization of Black precarity.

In A Biography of the Pixel, Pixar cofounder Alvy Ray Smith argues that the pixel is the organizing principle of most modern media, and he presents a few simple but profound ideas that unify the dazzling varieties of digital image making. Smith’s story of the pixel’s development begins with Fourier waves, proceeds through Turing machines, and ends with the first digital movies from Pixar, DreamWorks, and Blue Sky. Today, almost all the pictures we encounter are digital—mediated by the pixel and irretrievably separated from their media; museums and kindergartens are two of the last outposts of the analog. Smith explains, engagingly and accessibly, how pictures composed of invisible stuff become visible—that is, how digital pixels convert to analog display elements.

Designing Motherhood by Michelle Millar Fisher and Amber Winick is a smart, image-rich, fashion-forward, and design-driven book exploring more than eighty designs—iconic, conceptual, archaic, titillating, emotionally charged, or just plain strange—that have defined the relationships between people and babies during the past century. While birth often brings great joy, making babies is a knotty enterprise. The designed objects that surround us when it comes to menstruation, birth control, conception, pregnancy, childbirth, and early motherhood vary as oddly, messily, and dramatically as the stereotypes suggest. Each object tells a story. In striking images and engaging text, Designing Motherhood unfolds the compelling design histories and real-world uses of the objects that shape our reproductive experiences.

World Brain by H. G. Wells collates a series of talks and essays from 1937 in which Wells, author of The War of the Worlds, proselytized for what he called a “World Brain,” as manifested in a World Encyclopedia—a repository of scientifically established knowledge—that would spread enlightenment around the world and lead to world peace. Wells was imagining something like a predigital Wikipedia. The World Encyclopedia would provide a summary of verified reality (in about forty volumes); it would be widely available, free of copyright, and utilize the latest technology. Of course, as Bruce Sterling points out in the foreword to this edition of Wells’s work, the World Brain didn’t happen; the internet did. And yet, Wells anticipated aspects of the internet, envisioning the World Brain as a technical system of networked knowledge (in Sterling’s words, a “hypothetical super-gadget”). Wells’s optimism about the power of information might strike readers today as naïvely utopian, but possibly also inspirational.

In Water, science writer Jack Challoner tells the story of the most abundant substance on Earth, from its origins in the birth of stars billions of years ago to its importance in the living world. Water is so ubiquitous in our lives that it is easy to take for granted. The average American uses ninety gallons of water a day; nearly every liquid we encounter is mostly water—milk, for example, is 87 percent water. Clouds and ice—water in other forms—affect our climate. In this lavishly illustrated volume, Challoner describes how thinkers from ancient times have approached the subject. He offers a detailed and fascinating look at the structure and behavior of water molecules, explores the physics and chemistry of water, and considers the possibility of water beyond our own hydrosphere—on other planets, on the Moon, and in interstellar space.

How to Talk to a Science Denier by Lee McIntyre asks readers “can we change the minds of science deniers?” These days, many of our fellow citizens reject scientific expertise and prefer ideology to facts. They are not merely uninformed—they are misinformed. They cite cherry-picked evidence, rely on fake experts, and believe conspiracy theories. How can we convince such people otherwise? How can we get them to change their minds and accept the facts when they don’t believe in facts? In this book, Lee McIntyre shows that anyone can fight back against science deniers, and argues that it’s important to do so as science denial can kill. McIntyre offers tools and techniques for communicating the truth and values of science, emphasizing that the most important way to reach science deniers is to talk to them calmly and respectfully—to put ourselves out there, and meet them face to face.

Red Lines by Cherian George and Sonny Liew studies thin-skinned tyrants, the invisible hand of market censorship, and demands in the name of social justice to rein in the right to offend. Why do the powerful feel so threatened by political cartoons? Cartoons don’t tell secrets or move markets. Yet, asnGeorge and Liew show us in Red Lines, cartoonists have been harassed, trolled, sued, fired, jailed, attacked, and assassinated for their insolence. It includes interviews with more than sixty cartoonists and insights from art historians, legal scholars, and political scientists—all presented in graphic form. This engaging account makes it clear that cartoon censorship doesn’t just matter to cartoonists and their fans. When the red lines are misapplied, all citizens are potential victims.